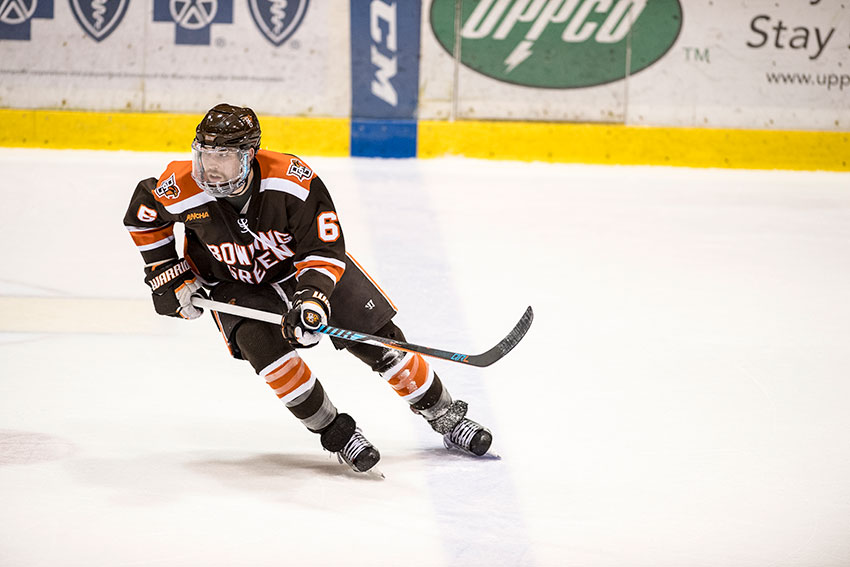 The Bowling Green State University hockey team will host its home-opener at 7:37 p.m. Friday (Oct. 13) at the Slater Family Ice Arena to help drop the puck on the weekend’s Homecoming festivities.

The Falcons (0-1), who traveled to Western Michigan University on Tuesday for the season opener, are asking fans to wear BGSU orange to the game Friday for an “Orange Out” against Michigan State University.

BGSU was voted to finish fourth overall in the Western Collegiate Hockey Association in two preseason polls. The Falcons return nine of 12 forwards who last season appeared in the WCHA Championship, as well as five of seven defensemen.

“The expectations within this hockey program are to win 20 games and to compete for and win championships every year, and that’s no different this year,” said coach Chris Bergeron, whose team recorded a 21-18-2 record last season. “I think it’s important to get off to a good start because we’re playing some high-level competition. Last year, we didn’t and it was hard digging out of that hole. You need to take advantage of your home games, and we have a bunch.”

Senior forward Mitch McLain of Baxter, Minnesota, who led the team in scoring last year (17 goals, 16 assists, 33 points), was voted to Preseason All-WCHA First Team honors by both the coaches and media, in addition to receiving votes for Preseason WCHA Player of the Year by the media.

Last season, the Falcons won seven consecutive games before entering the WCHA Championship, the longest winning streak of Bergeron's career and longest of the Bowling Green hockey team since the 1987-88 season. It was the team’s first appearance in the WCHA Championship since 1988.