Milestones: A Celebration of BGSU School of Art Alumni and 25 Years of Digital Arts at BGSU 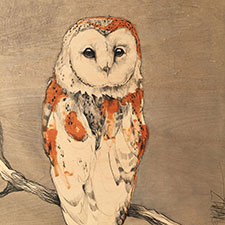 The artwork of more than 100 Bowling Green State University School of Art alumni will be featured in Milestones: A Celebration of BGSU School of Art Alumni and 25 Years of Digital Arts at BGSU, which opens Sept. 30. The Milestones exhibition will open at 7 p.m. in the Dorothy Uber Bryan Gallery Lobby in the Fine Arts Center.

The weekend of events kicks off at 5:30 p.m. Sept. 29 with an ARTalk presented by Chad Greene, one of the original eight graduates from BGSU’s Computer Art program in 1992. He will present “A Career Retrospective – Comparing the Feature Film and Gaming Industries.” The presentation, free and open to the public, will be in the Thomas B. and Kathleen M. Donnell Theatre in the Wolfe Center for the Arts.

Throughout the last 25 years, Greene has been responsible for concept art, 3D modeling, animation, 2D/3D texturing, lighting and compositing, and art direction for broadcast animation, video games and feature films. In this ARTalk, Greene will talk about his career in the feature film and gaming industries at giants such as DreamWorks and Sony Picture Imageworks, and his current position as a senior art director at Microsoft Studios. He will go behind the scenes and share advice about job hunting and expectations for success in these competitive industries.

Events on Saturday start with a printmaking workshop by the BGSU Print Society. The student printmaking club will hold the workshop from 10 to 11 a.m. in 1211 Fine Arts Center. Participants will print T-shirts and posters, with some items for sale.

A demonstration by current Master of Fine Arts metals students will start at 11 a.m. in 101 Fine Arts Center, the Metal Studio. They will present “Thermoplastic – The Deformation of Steel.” A ceramics demonstration will begin at noon.

Also on Saturday, female alumni, faculty and students will host a “Women in Technology” networking event from 1 to 2 p.m. in 1100 Fine Arts Center. They will discuss relevant issues unique to women in the technology industry workplace, share professional advice and offer mentorship.

Davis, one of the original eight graduates from BGSU’s Computer Art program in 1992, has been providing computer graphics for games/simulation, TV/film and the design visualization industries for 25 years. He has authored several books and routinely lectures at industry conferences including: Autodesk University, SIGGRAPH, GDC and NAB. In 2007, Davis was awarded the title of Autodesk Master and joined Autodesk as a senior technical specialist. Since 2016, he has been part of the Radeon Technologies Group at AMD, where his primary focus is deep diving into the ecosystems of photorealistic rendering and interactive (AR/VR/MR) solutions for the design visualization, manufacturing and engineering industries. He is an active member of The Visual Effects Society & Mensa and is based out of Orlando, Florida.

In addition to his extensive career in the video games and feature films industries, Greene also is a fine artist trained in drawing and painting, exhibiting his fine artwork in galleries throughout the U.S

Vance graduated from BGSU with an MFA in Digital Arts in 2002. Since then, she has worked in freelance web design, as an accessibility consultant for Cleveland State University, and most recently as a design engineer at American Greetings. She is a web standards and accessibility advocate who crafts code as a living and creates artwork out of necessity.

Toledo native Culp is a designer whose work includes public street art, fashion, graphic design and mixed media. She started UrbanDigitz Arts Studio in 2007, making work that is currently applied in fashion. She illustrates and constructs custom fashions and accessories and has created over 600 original textile designs. Her art is featured in traveling and permanent displays in the Brooklyn, New York Art Library and a residency exhibition in Nahariyya, Israel. Most recently, her artwork was included on a microchip containing art and writing submissions, which was taken on NASA’s OSIRIS-Rex mission rocket, launched on Sept. 8, 2016.

Fairclough is a concept artist currently working at Bioware's Austin location. He has worked on the upcoming James Cameron and Robert Rodriguez film Alita: Battle Angel and his game credits include projects such as Star Citizen, Shadow of the Colossus, Mass Effect Andromeda, and the recently announced game, Anthem.