BGSU Volleyball is rallying around a youthful squad this season 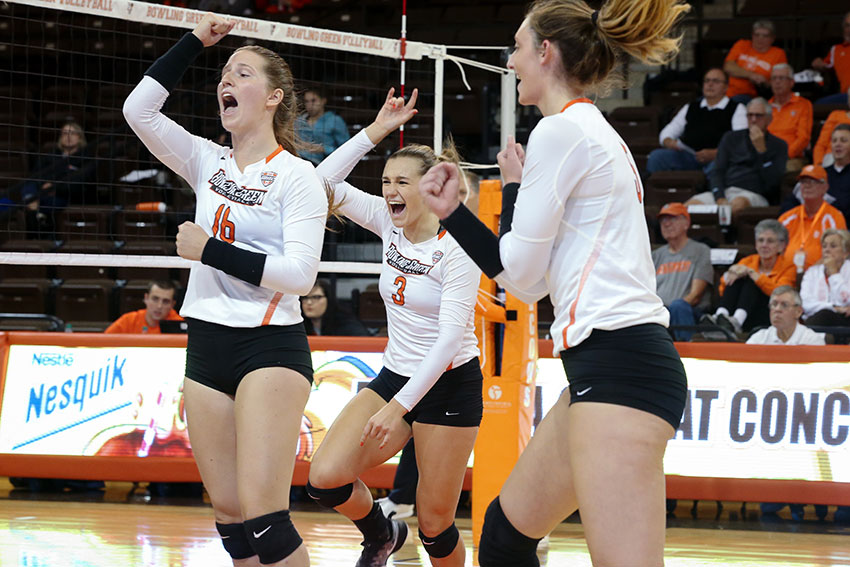 The Falcon volleyball team celebrates during a match against Notre Dame.
Tweet

The Bowling Green State University volleyball team, led by Coach Danijela Tomic in her sixth year at the helm of the program, is eight games into the season. Tomic returns assistant coach Alex DelPiombo for a second season, while Alison Cooke joins the program for her first season as an assistant coach for the Falcons. Evan Antal begins his second season as the director of operations.

They welcome back 11 players from last season’s successful season, which includes just one senior on the 15-member roster. Joining senior outside hitter Nicole Slimko on the court this season will be four juniors, six sophomores and four freshmen. BGSU is 3-5 overall, including a 2-3 record at home, as the Falcons head to Richmond, Virginia, to play in the Virginia Commonwealth University Invitational. BGSU will play VCU at 7 p.m. Friday (Sept. 15), Northwestern University at 10:30 a.m. Saturday (Sept. 16) and Seton Hall University at 4:30 p.m. Saturday.

After returning to the starting libero position this season, junior Kallie Seimet of Oregon, Ohio, has been recognized as Mid-American Conference East Division Defensive Player of the Week for two consecutive weeks. She has tallied 20-plus digs in six of eight matches so far this season, and set a new career-high mark with 36 digs in a 3-2 win at Northern Kentucky University. Freshman Jacqueline Askin of Louisville, Kentucky, recorded a double-double in her first match, and has marked three in eight matches. Her three double-doubles lead the Falcons, while her 18-kill performance against California State University, Sacramento also is a team high.

Twin sisters Paulina and Victoria Iacobelli of Novi, Michigan, are forces at the line for the Falcons, and have accounted for more than 25 percent of the team’s service aces this season. Paulina carries seven aces and 47 digs, while Victoria has tallied six aces and 59 digs. The Falcons will begin Mid-American Conference home action vs. Northern Illinois on Sept. 23 at home.