Bernie Casey was one of BGSU’s most accomplished alumni 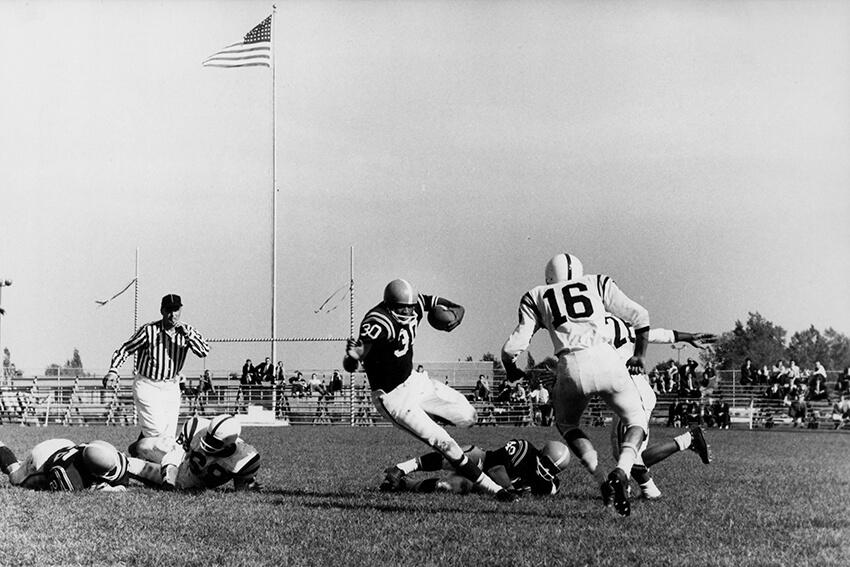 Bowling Green State University alumnus Bernie Casey '61, '66 was an exceptional artist, athlete and actor. The University is saddened by the loss of one of its most accomplished and admirable alumni. Casey died Tuesday, Sept. 19, in Los Angeles.

“Bernie Casey was a true Renaissance man, and a role model for our students today,” said President Mary Ellen Mazey. “Bowling Green State University allowed him to develop his talents in and out of the classroom, from the artist’s studio to the football field, and his life was one of great achievement and service.”

He received a bachelor’s degree in art education in 1961, attending in part on a football scholarship. Casey was a key player in BGSU’s 1959 small college national championship season and was named a member of the Little All American Team. He was also competitive in track and field, winning three consecutive Mid-American Conference Championships in the high hurdles and earning a trip to the finals at the 1960 U.S. Olympic Trials in the event. He was named to the BGSU Athletic Hall of Fame in 1966 as a member of the third class of inductees, as well as the Mid-American Conference Hall of Fame.

After graduation, he was selected by the San Francisco 49ers as the ninth draft pick in the first round of the 1961 draft – the highest a BGSU player has ever been drafted in the NFL. Before retiring from the NFL, he also played for the Los Angeles Rams. He was selected to play in the Pro Bowl, and was named All-Pro Wide Receiver and Football All American.

During pro football’s offseason, he returned to campus to pursue a master’s degree in fine arts to complement his bachelor’s degree. He held 40 individual art exhibitions around the world to showcase his paintings, and exhibited work in many galleries including the Hirshhorn Museum in Washington, D.C., and the John Bolles Gallery in San Francisco. BGSU also hosted a show of his paintings, organized by the late art patron and former BGSU galleries director Mary Wolfe, with whom he was close. His poetry and other writing were published by Doubleday & Co.

Casey’s acting debut came in the film “Guns of the Magnificent Seven,” and he had roles in more than 55 films. He starred on television in “Bay City Blues” and “Harris & Company,” and during his acting career he worked with Burt Reynolds, Eddie Murphy and John Travolta.

Named one of BGSU's 100 Most Prominent Alumni in 2010 during the University's centennial celebrations, Casey was inducted as a BGSU Distinguished Alumnus in 1979 and served as commencement speaker in 1989. He is also a 1997 member of the BGSU Alumni Wall of Fame. He served on several boards and organizations, and was past chairman of the board of trustees of the Savannah College of Art and Design and chairman of the advisory board for the Minority Health Institute.