2017 Falcon Family of the Year 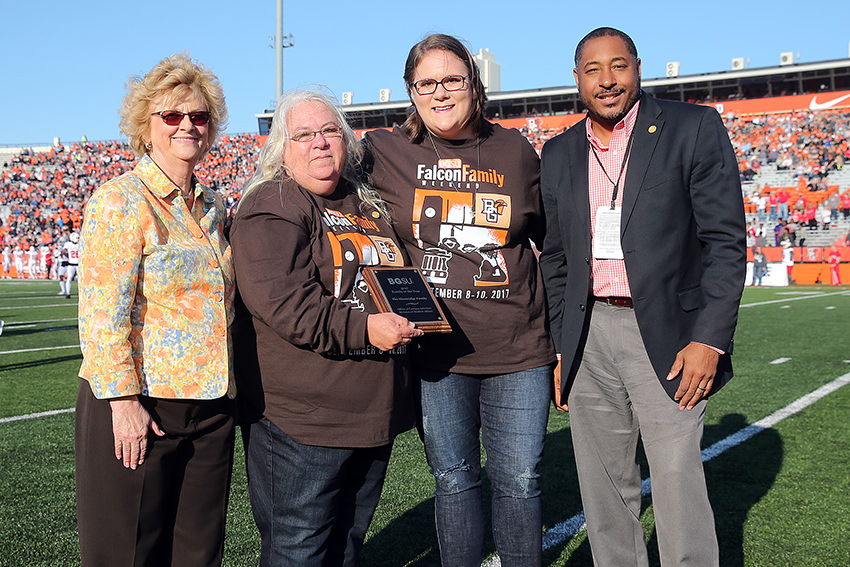 These words are so important to Bowling Green State University senior Caitlin Shortridge that she had them tattooed on her right ankle.

Meaningful words. And the beginning of a very powerful message: Be kind, for everyone you meet is fighting a battle you know nothing about. Despite her smile and positive energy, Shortridge is one of those people.

In 2002, when she was just 8 years old, Shortridge’s father, James Keith Shortridge, died. She said this event pushed her to be more mature, more realistic, to plan, “because things can change in an instant.”

But none of those things define Shortridge.

“One thing doesn’t make a person,” she said. “After each event, you grow, you move on.”

And you thank your mother for being your rock.

Shortridge nominated her mother, Georgina, for the 2017 Falcon Family of the Year award earlier this year, concluding her essay with these words:

“It’s hard to sum up 23 years worth of life with my amazing mother in 750 words, but I hope the above essay gives you an idea of the incredible, phenomenal, deserving person she is. She has taught me to love deeply, laugh loudly, work hard and always help others.

“For someone who rarely seeks thanks or recognition from others, I feel she is the embodiment of what the Falcon Family of the Year represents. She is the reason I made it to Bowling Green and have seen so much success here; and I only think it’s fitting, as I leave this university, to recognize her for all she has done over the years.”

“For someone who rarely seeks thanks or recognition from others, I feel she is the embodiment of what the Falcon Family of the Year represents. She is the reason I made it to Bowling Green and have seen so much success here; and I only think it’s fitting, as I leave this university, to recognize her for all she has done over the years.”

Shortridge, a tourism, leisure and event planning major, plans to graduate this December. She and her mother were presented the 2017 Falcon Family of the Year Award during halftime of BGSU’s football game against South Dakota on Sept. 9 at Doyt Perry Stadium.

“Caitlin’s spirit, drive and outlook are inspiring,” said BGSU President Mary Ellen Mazey. “Her mother has been an outstanding example for her and is one of the reasons Caitlin has made such a positive impact on our campus. I was pleased to recognize them as the Falcon Family of the Year.”

Shortridge was born in Illinois, but her family moved a lot because of her father’s Navy career. They settled in Nashport, Ohio, in 2001. It was only one year later that her father died.

“My dad was and is the love of my mom’s life,” she said. “My mom’s done amazing for the circumstances we were placed in.”

Eight years later, Georgina was laid off from her job as a receiving manager at Carnival Foods. When a fire destroyed their home a year later, firefighters were able to save photos and mementos for the family, which includes Shortridge’s five older siblings.

“Coming from a lower socioeconomic class meant budgeting, cooking in, and not having all the wants,” Shortridge wrote in her nomination essay. “My mom made sure I knew the importance of paying on time, not overspending, and getting necessities before spending money on other things. Personally, that’s one of the things, among so many, that I am thankful my mom has taught me.

“I feel confident that when I graduate I can enter the working class and be self-sufficient, using the skills and knowledge she’s instilled in me over the years.”

It was because of finances that Shortridge took a semester off after high school to work before taking classes at a community college near her home. She transferred to BGSU in August 2013.

“BGSU was the only college I applied to,” she said, adding that she knew she wanted to come to the University since she was 9. “I like the community; everyone is so nice. It’s not too far from home, but not too close to home. It fit.”

Shortridge first visited BGSU in 2003 when her cousin Daniel Clark graduated. She still remembers getting a pair of BGSU shorts at SBX during that visit.

Although Shortridge first majored in Spanish and Psychology, she swapped Spanish for tourism, leisure and event planning after she found herself more interested in her friends’ classes than her own.

“Coming to college was something I could do for my mom,” she said. “Being successful so I can help her in the future has driven me. I want to do things that make her proud.

“When I graduate, I’ll have a broad array of opportunities; I will be able to go in different directions.”

Shortridge almost left BGSU when her mother was diagnosed with breast cancer in the fall of 2014.

“She was the one who said no,” Shortridge said. “My mom values my education and even in her time of need would not allow me to sacrifice my future to care for her.”

Georgina’s cancer did not spread, and it has not returned.

Shortridge has made the most of her time at BGSU. She was an executive board member of Falcon Fanatics, is co-president of Bleacher Creatures and is a member of Omicron Delta Kappa. She was also a two-year council member of Your Fellow Falcon, a Preview Day shuttle host, a St. Baldrick’s shavee, an Opening Weekend group leader, a Dance Marathon dancer, and a 2016 Homecoming attendant. She currently has a practicum with the BGSU men’s basketball program and is a desk clerk at Centennial Hall. She had a practicum with BGSU gymnastics in spring 2017.

“I enjoy helping with the student experience,” she said. “I want everyone to have as positive of an experience here as I have had. I want them to have what they need to be successful here.

“And I want people to feel good about themselves. I strive to be kind to people, to be caring and generous whenever I can. I want to be that person.”

Seeing her mother persevere through the things life has thrown at her – and still be loving, kind and giving – helped Shortridge become that person.

“My mom deserves this; she does so much for others without any expectations. She has such a good heart,” Shortridge said, adding that it was nice to see a single-parent family recognized. “Families come in all different shapes and sizes. It’s a good thing for people to see that, to see that they can do it, too.”

Shortridge hopes to work at a sports facility after graduation. Her ultimate goal is to get a doctorate in sports psychology.

“You always need to be learning something,” she said.