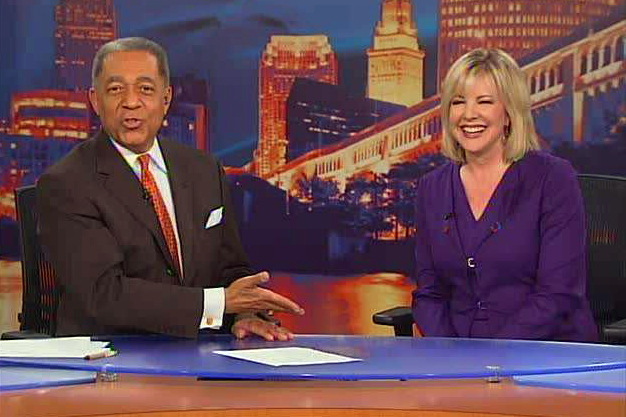 News anchors Leon Bibb and Lee Jordan signed off for the very last time after a combined 52 years at the television news station. Both credit much of their success to their studies at Bowling Green State University.

“We are both high-flying Falcons of Bowling Green, having found not only education at the University but also careers in television news,” Bibb said in a recent Facebook post to Bowling Green State University Alumni Association.

Jordan, a 1976 alumna who majored in journalism, transferred to BGSU from the University of Cincinnati her sophomore year.

“At the time, BGSU had the only accredited journalism school in the state, and I heard very positive things about the University from friends who went there which really made my decision for me,” she said.

While working on her degree, Jordan also spent a lot of time working for the on-campus radio station, WFAL.

“I spent two and a half years there and I loved it,” she said. “I learned so much about the business and did everything from on-air work to sales, but mainly promotions and marketing.”

That experience at the radio station contributed to her success after graduation.

“All of my classes were great and I had a great relationship with my professors. In fact, one of them helped me get my first job at WTOL in Toledo,” she said.

Jordan spent more than a year at WTOL-TV, Channel 11 as a promotions assistant. After that, she moved on to WNCI-FM in Columbus where she spent three years as the Director of Promotions and Marketing. While she enjoyed working behind the scenes, she still had an interest in being on-air. When a position opened up at WCMH-TV, Channel 4 in Columbus, she jumped at the chance to audition.

“I was trying to satisfy my curiosity about something, and it was a bit of a risk at the time, but I thought that I’d regret it if I didn’t,” she said.

Jordan was hired as co-anchor of “PM Magazine” in 1981, which was the start of her 41-year career in TV news.

“I look back on that now and it was the fork in the road that was the right fork to take,” she said. “It set me on a path to exactly what I was supposed to be doing.”

“We are both high-flying Falcons of Bowling Green, having found not only education at the University but also careers in television news,”

Jordan spent 10 years in Columbus before landing her next job at WEWS in Cleveland, where she’s been for the past 30 years. When asked what it feels like to be called a legend in Cleveland, Jordan said she couldn’t have had such a successful career without her peers.

“I feel like I have worked for a legendary TV station,” she said. “It really is because of my work with, and for, really amazing journalists and news managers that I have been able to be successful here and to have the kind of tenure I have.”

Bibb, Jordan’s co-worker of 22 years, and a 1966 graduate of BGSU, is also retiring. Like Jordan, Bibb also worked at WTOL and WCMH before landing a job in Cleveland. He said he owes much to BGSU and recalled working for the student radio station his freshman year.

“On my desk at WEWS News5 in Cleveland is a photograph of me at the microphone of WBGU-FM,” he said. “In the photo, I am 19 and I have been on the air in some form or fashion ever since.”

Bibb’s career was briefly put on hold while he served in Vietnam. But when he returned, he came back to Bowling Green and worked for WBGU-TV, producing a daily newscast.

“From there, commercial television came calling,” he said. “Toledo, Columbus and two stations in Cleveland became the roadmap I would follow for more than 40 years.”

Bibb’s last day at WEWS was August 1, and Lee’s last day was July 28. WEWS producers took some time in their newscasts to celebrate the careers of Bibb and Jordan and viewers sent in their well wishes on the news5cleveland.com website.