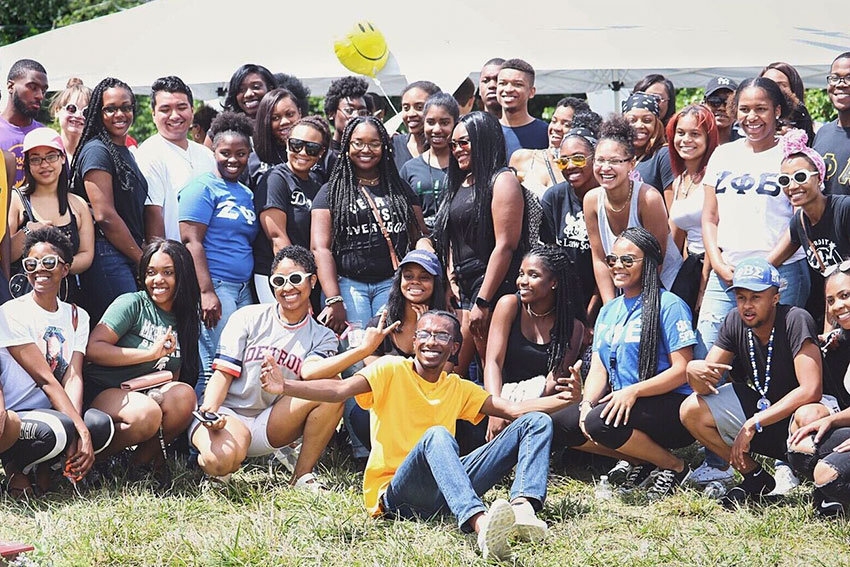 Hailed as an economic boon for a struggling city, the rapidly progressing revitalization and gentrification of Detroit neighborhoods has had the unintended consequence of leaving many longtime residents feeling left behind and without ready access to food stores and other essential businesses.

But BGSU junior Kyle Jumper-Smith has not forgotten about his hometown. Inspired by those who have given generously to him, this summer he organized the second Project Feed Thy Neighbor for his neighborhood, the Cass Corridor. It was a day of empowerment providing food, fellowship and positivity. This year’s event fed 422 people through the help of many donors and 76 volunteers who manned grills, served food, greeted attendees and managed the lines.

“It wasn’t just about giving out food but also about uplifting people,” said Jumper-Smith, an inclusive early childhood education major and former Student Leadership Assistant (SLA) in the Center for Leadership . “We challenged our volunteers to reach out to talk with people about what was going on and give each person a positive message of empowerment and a hug. We wanted to create a loving space.

“This was a great experience to see the BGSU community collaborate with other students from other institutions and promote positivity and love in a community that is being abandoned due to new business ventures,” he said. “We also had people from Michigan State University, Kentucky State University, Grand Valley State University, Morehouse College and my alma mater, Lewis Cass Technical High School.”

He dedicated the event to his late grandmother. “She would have wanted me to do something like this,” he said.

“I’m in the President’s Leadership Academy and I’m a Thompson Scholar,” Jumper-Smith said. “During the summer program leading up to our first year in college, my cohort was shown a news special about a couple from Detroit, Robert and Ellen Thompson, who presented their employees bonuses for their hard work and dedication to their family-owned asphalt company after they sold their holdings in Thompson-McCully to a company in Ireland. I was so inspired by them and their vision and I got to meet them at homecoming my first two years here. I also heard about all the other projects that they have contributed to the city of Detroit through their Thompson Education Fund.”

The Thompsons are major benefactors of BGSU, having provided support for the 2001 renovation of the student union (now the Bowen-Thompson Student Union) and for the President’s Leadership Academy (PLA), which draws many students from the Detroit area.

Jumper-Smith said the PLA teaches servant leadership and giving back to your community, as the Thompsons have done.

“I was given the best and most generous gift that was ever given to me — four years of college for free — and I am so honored and appreciative. So my first year I was thinking about what I could do,” he said.

He and his high school classmates and friends had been disturbed seeing people in their neighborhood going without food after “a lot of the stores in the Cass Corridor area were slowly closing business, which meant that reasonably priced food was becoming limited in the area. There are no affordable grocery stores in the area now, and the only grocery store that is within walking distance is a Whole Foods Market on Mack Avenue, which would make purchasing a month’s worth of groceries harder on most individuals in the area due to their higher prices.”

Jumper-Smith noted that, with the new and improved business ventures and revitalization of downtown Detroit, jobs and food security should spill over into the surrounding communities, but so far they have seen none of that. “Also, local shelters have planned to relocate to other locations in the city, which limits resources to those in the Cass Corridor tremendously,” he said.

He saw a model for help in the former Black Panther Party’s Service to the People programs that had provided nutritious, high-quality food to families in neglected neighborhoods. He and his closest friends organized the first Feed Thy Neighbor event in 2016 for his 20th birthday, and it was a success. “This year I’m 21 so I thought, ‘OK, I have to make it even bigger.’”

“Kyle has just always been very passionate about the way he views Detroit and going home,” said Shaunda Brown, a 2014 alumna and now second-year graduate student in the College Student Personnel http://www.bgsu.edu/education-and-human-development/department-of-higher-education-and-student-affairs.html program who was the graduate adviser to the Black Student Union (BSU) when Jumper-Smith was vice president of the organization. “There’s all this rhetoric around ‘Once you leave, don’t come back,’ but he’s always been so charismatic and so passionate about where he came from.”

Jumper-Smith said Brown has been an important mentor to him, always affirming his plans and then encouraging him to take them even further. “She pushes students to do amazing things in the community,” he said. “She’s led me to do meaningful things in my leadership.”

He used his newfound leadership skills to manage the event, carefully thinking through all the details. His focus in high school had been journalism and media, and he called upon his good communication skills to spread the word.

Targeting Millennials (people ages 18-25), he used social media to invite them to participate through volunteering and donating money, food and supplies. He found sponsors willing to lend a grill, chairs or other items. He utilized online sign-up and donation applications and an electronic record-keeping software to assign tasks and keep track of progress. He encouraged volunteers to be thoughtful and respectful in the use of photos and social media during the event so as not to make neighbors feel uncomfortable. And he asked that they end any interaction with a hug and a positive message.

People were energized, and the response was even greater than he and his co-organizers had hoped. “A friend from Atlanta surprised me by driving up the night before. He said, ‘Well, I was here for the first one so I thought I’d better be here for this one,’” Jumper-Smith said, smiling.

Colleagues from the PLA and Undergraduate Student Government, where Jumper-Smith is the former vice president and current director for diversity affairs, pitched in. Other members of the BSU, including President Angelica Euseary (also a PLA member) and Vice President Zarina Cornelius, helped out, as did administrator Juantez Bates, a fellow PLA and SLA member and former BSU president. Zeta Phi Beta sorority members served the food. Rashard Thomas, a good friend from Cass Corridor and current PLA scholar and SMART mentor, served as photographer.

Even with all their planning, Jumper-Smith said, “I was very nervous about its impact on the community and how it would be received. I hoped people would see it as a loving space and not something we were imposing on them. But all my fears were proven wrong and it was a great day.”

Euseary, who grew up near Cass Corridor and attended middle school with Jumper-Smith, said, “It was a really nice event. I’d done community service in the area before, but this had more of a family feeling. It was a different vibe and it was nice to be creating these memories.”

Something as basic as talking to homeless people “like they’re people,” she said, was an important part of the day’s spirit of loving-kindness.

Although she seemed doubtful that neighborhoods in the wake of gentrification could affect its relentless progression, “Forming these bonds and relationships as a whole is the only way we can ever make a difference,” she said. “We want to show there are people who care about them and want to help.”

Back in Bowling Green, Jumper-Smith regularly participates in community service during the school year, with his PLA classmates. His favorite activities are Literacy in the Park and Feed My Starving Children, events that nourish the mind and the body.

He would love to see Feed Thy Neighbor become a monthly event instead of once a year, possibly sponsored by a nonprofit organization. “I’d also like to see it come to Toledo neighborhoods and be organized by BGSU students. It’s another way for you to grow within your community.”