Falcons to lean on experience this season 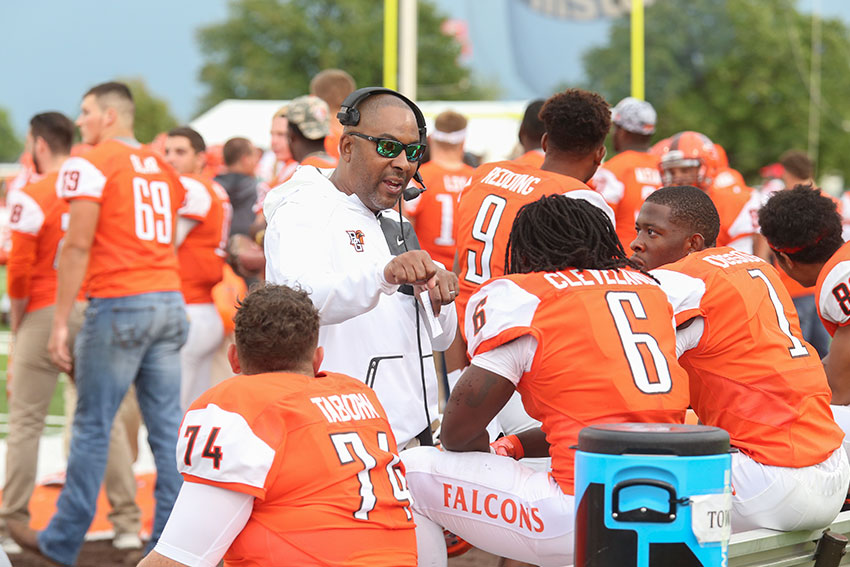 The Bowling Green State University football team finished last season on a three-game winning streak, and the Falcons hope to ride that momentum into the 2017 season.

BGSU is predicted to finish third in the Mid-American Conference East Division, as voted by the league's media members, behind Ohio and Miami and ahead of Akron, Buffalo and Kent State. The Falcons open at Michigan State on Saturday, Sept. 2. BGSU’s home schedule includes games against South Dakota, Sept. 9; Akron, Sept. 30; Ohio, Oct. 14 (Homecoming); Northern Illinois, Oct. 21; Toledo, Nov. 15. The 2017 Marathon MAC Football Championship game will be played on Saturday, Dec. 2, at Ford Field in Detroit.

This year’s BGSU team has experience to lean on with 11 returning starters — six on offense and five on defense — and 42 letter winners, led by second-year Coach Mike Jinks.

Jinks said the players worked hard in spring practice and have come together as a cohesive unit for the 2017 season.

“We know who we are because we’ve developed an identity,” Jinks said. “We’ll put our football team in a position to be successful moving forward. We’re happy about where we are.”

A talented freshman class will help to add depth to returnees from last year.

“I’m really impressed with the freshmen we brought in,” Jinks said. “They’re really a talented group.”

Senior punter Joseph Davidson of Findlay, Ohio, was a fourth-team All-American last year. He will be in competition for the Ray Guy Award, given annually to the best punter in the country.

Quarterback James Morgan, a redshirt sophomore from Green Bay, Wisconsin, had one of the best freshman quarterback seasons in University history a year ago, and will look to build on his success in 2017. Morgan played in all 12 games, starting seven, completing 183 of 326 passes for 2,082 yards and 16 touchdowns. He was the first freshman quarterback in program history to throw for more than 250 yards in four consecutive games and was named the Mid-American Conference East Division Offensive Player of the Week after throwing five touchdowns against Toledo.

Junior wide receiver Scott Miller of Barrington, Illinois, was first-team All-MAC last year, and will anchor a wide receiver unit that is one of the best in the MAC. Joining Miller, will be junior transfer Datrin Guyton (Oregon State) from Manor, Texas, and freshman Matt Wilcox Jr. of Huber Heights, Ohio, who each took part in spring practice.

Senior running back Donovan Wilson and senior linebacker Nate Locke are returning starters who will provide leadership on both sides of the ball. Locke has maintained a 4.0 grade point average, and is a nominee for the Allstate Good Works Team. Wilson already has earned a bachelor’s degree from BGSU, and is pursuing a master’s degree.