Afi-Setut A-Alkebu-Lan plans to learn how to fly, build planes at BGSU 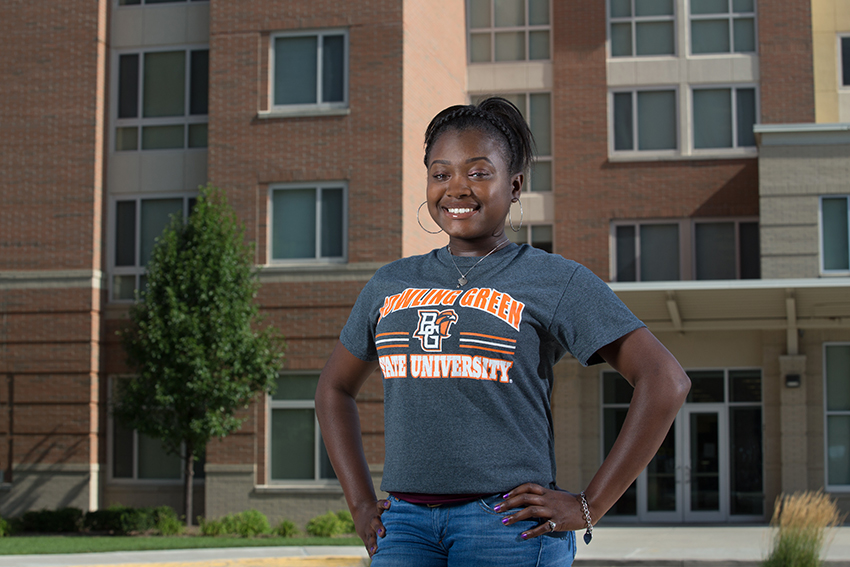 For Afi-Setut A-Alkebu-Lan, her love of flight all started with a high school trip to Japan with the mayor of Detroit.

That’s when she knew she wanted to be a pilot.

“The flight was 18 hours,” said A-Alkebu-Lan, who accompanied Mayor Mike Duggan to Japan along with seven other students. “I thought, ‘If that pilot could do it, I know I could do it.’ After I went to Japan, I just wanted to travel the world all the time. It was definitely eye-opening — the world is different.”

A-Alkebu-Lan plans to stand out at Bowling Green State University as a member of the Class of 2021 majoring in aviation engineering technology and as a member of The Sidney A. Ribeau President's Leadership Academy (PLA).

BGSU’s on-campus airport and the PLA scholarship were the two main reasons A-Alkebu-Lan decided to become a Falcon.

“The PLA program is the most amazing scholarship program I’ve ever heard of,” said A-Alkebu-Lan, who grew up in Detroit and graduated from Cass Technical High School.

The PLA program is a four-year leadership development program that engages scholars in classes, workshops, experiential learning and community service activities. The curriculum focuses on specific outcomes, with each year's experience building on those of the previous year.

“Servant leadership is our main priority in the PLA,” she said. “We are very focused on our values, which are service, integrity, credibility and learning. (In July), we are taking seven classes for our summer program for one month. We are very busy, but it’s good that we’re learning great study habits and we’re getting to learn about our cohort. It’s just a really great program.”

A-Alkebu-Lan is looking forward to growing her leadership skills, building on strengths she started developing in high school. At Cass, she helped start an anti-bullying club on campus. She developed her own lesson plans and spoke to local middle school students about bullying and how to prevent it. She also was involved with the Tuskegee Airmen’s Detroit chapter and her high school’s student council, High Fashion Society and Sean (Big Sean) Anderson's music studio.

The aviation engineering technology program is a perfect fit for A-Alkebu-Lan because she has grand plans beyond just being a pilot.

“I always knew I wanted to do engineering, but I never knew what kind,” she said. “When I was 15, I had the opportunity to fly a Cessna and that made me so happy. I fell in love with planes and aviation, and when I came here and noticed they had the two together in the same major, that just sealed the deal for me.”

A-Alkebu-Lan wants to have her pilot’s license by the end of her sophomore year.

“I want to make and fly planes — that is my goal. I want to learn all of the parts and how to manufacture them. I do have aspirations of having my own company that supplies planes to commercial airlines.”

A-Alkebu-Lan was chosen as one of the top 10 students in the 2017 class of Detroit area graduating seniors and was featured in the June issue of BLAC magazine, titled “Young, Gifted, and Black.”

In the magazine article, she credited the PLA scholarship from BGSU for “lifting a great burden off my shoulders — and especially my mom’s.”

Two other goals A-Alkebu-Lan has set for her time at BGSU are interning at Boeing and studying abroad.

“I plan to try my best as soon as I touch down in school to get those connections made so I can make interning at Boeing possible,” she said. “I have plans to study abroad, preferably Japan, because I’ve been there before and I just want to learn so much more about its culture.”

BGSU, in addition to being the perfect institution for her to grow academically and personally, is only about 90 minutes from home.

“That’s a plus for my mother, of course,” she said. “The University is far enough away and close enough to home, too. I know a few people from Cass who attend here, and I’m hoping to meet new people.”

A-Alkebu-Lan said the recipe is right for her to not only stand out at BGSU, but also to belong.

“Its campus is big enough and small enough at the same time,” she said. “It’s not too big where it’s not a family-oriented type of campus, especially for the PLA. I haven’t even officially started classes yet, and there has been a ton of support everywhere. But, at the same time, it’s big enough you see a new face every day.”