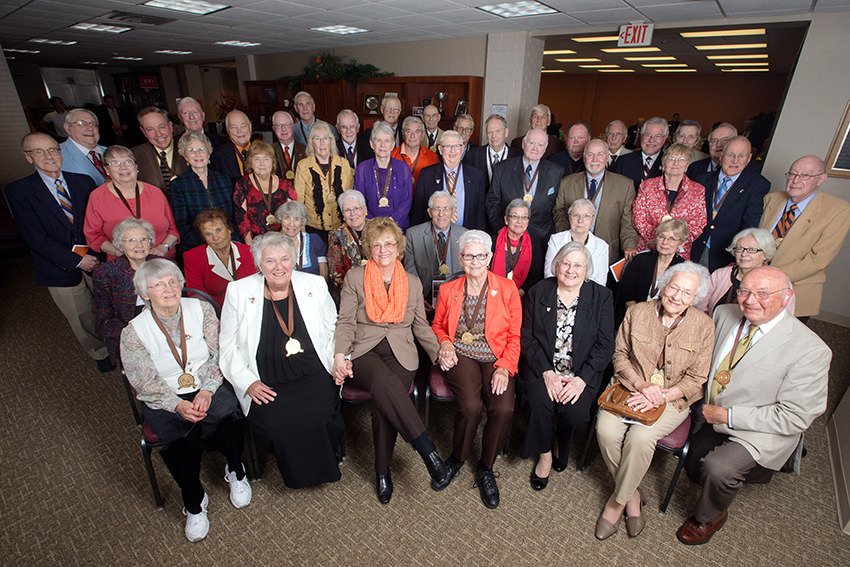 The deep bonds shared by Bowling Green State University alumni were honored at the third annual Golden Falcons induction ceremony on May 9, 2017. Golden Falcons are alumni who have been graduates for 50 or more years. BGSU welcomed them to campus for a reunion events where they were inducted as Golden Falcons with a medallion crafted exclusively for this group of esteemed alumni.

A number of alumni who were previously inducted as Golden Falcons also attended the event which included an entire day of special events. A highlight of the day was the Walk Down Memory Lane during the luncheon where alumni shared their fond Falcon memories. The Then and Now campus tour allowed alumni to compare today’s classrooms, residence halls and other facilities to the campus of the 1940s, '50s and early '60s. The Golden Falcons also enjoyed presentations from BGSU faculty and staff about Optimal Aging and Staying in Touch with Technology. The reunion event concluded with a dinner hosted by Mary Ellen Mazey, Ph.D., president of Bowling Green State University, and the induction ceremony.

Several inductees also remained on campus after the Golden Falcons reunion to attend BGSU’s second annual Alumni Summer College. The three-day event provided a series of educational (and fun) classes, lively discussions, and excursions for alumni and friends. The courses were taught by BGSU’s nationally recognized faculty and included topics such as Brainstorming the Novel, The Amazing Amazon: Wonder Woman's 75th Anniversary, and the Art, Science and Business of Beer.

Next year's reunion and induction ceremony will be held on June 12, 2017. Details will be available at bgsu.edu/goldenfalcons.