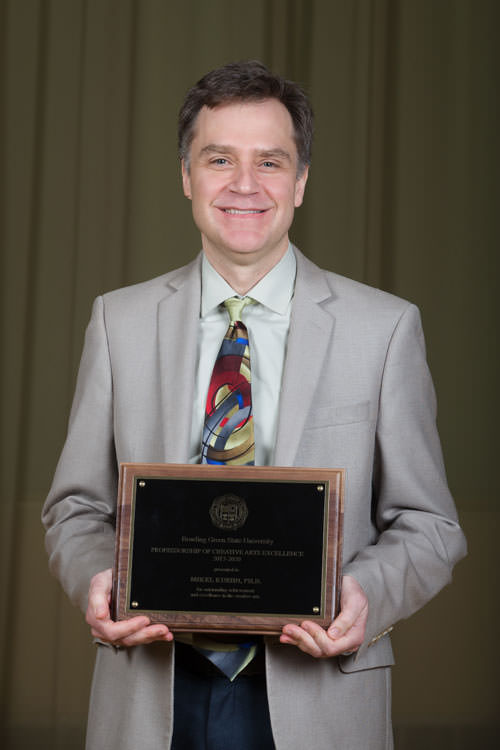 Dr. Mikel Kuehn, a professor of composition in the College of Musical Arts, was named the 2017 Professor of Creative Arts Excellence at the Faculty Excellence Awards April 13.

The title is conferred upon members of the faculty already holding the rank of professor who have established outstanding national and international recognition through research and publication or creative/artistic achievement in their disciplines. The title is for a period of three years with an annual stipend of $5,000 — a $3,000 salary stipend and $2,000 for professional development.

“Throughout his 19 years at BGSU, Mikel has pursued a rich and active artistic agenda, as well as demonstrating his effectiveness and dedication as a teacher and mentor and maintaining a consistent record of service,” wrote nominator Dr. Nora Engebretsen, chair of musicology, composition and theory.

Since being promoted to full professor in 2013, Kuehn has earned several major awards, boosting not only his but also the BGSU composition program’s outstanding national and international reputations.

“In particular, I would highlight his stunning success in recent competition for some of the most prestigious and highly contested awards in his field, as evident in his 2014 receipt of a Barlow Endowment Commission, in his 2014-15 Guggenheim Fellowship in Music Composition, and most recently in his 2015 commission from the Fromm Foundation at Harvard,” Engebretsen wrote. “To receive even one of these awards would be a tremendous honor; to receive three within the span of two years is phenomenal.”

Kuehn is in his 19th year at BGSU. A prolific composer, his work is performed frequently worldwide and he has numerous composition commissions. His compositions have been described as having “sensuous phrases ... producing an effect of high abstraction turning into decadence,” by New York Times critic Paul Griffiths.

Engebretsen wrote that Kuehn “consistently leverages his own successes into successes for our college and for the University at large.”

In fall 2016, New Focus Recordings released “Object/Shadow,” a portrait of Kuehn’s music. This CD spans 20 years of his music, features Chicago’s well-known Ensemble Dal Niente and includes program notes by Harvey Sollberger, one of America’s icons in contemporary music. It also features a performance of the BGSU Saxophone Ensemble conducted by Kuehn. Other recordings are also available.

“Mikel’s recent accomplishments demonstrate his ability to compete at the highest professional levels,” Engebretsen wrote. “He is highly regarded and sought after as a teacher and a mentor, and he is a valued member of the College of Musical Arts community.”