Current, former players get a leg up at NFL Sports Media Boot Camp 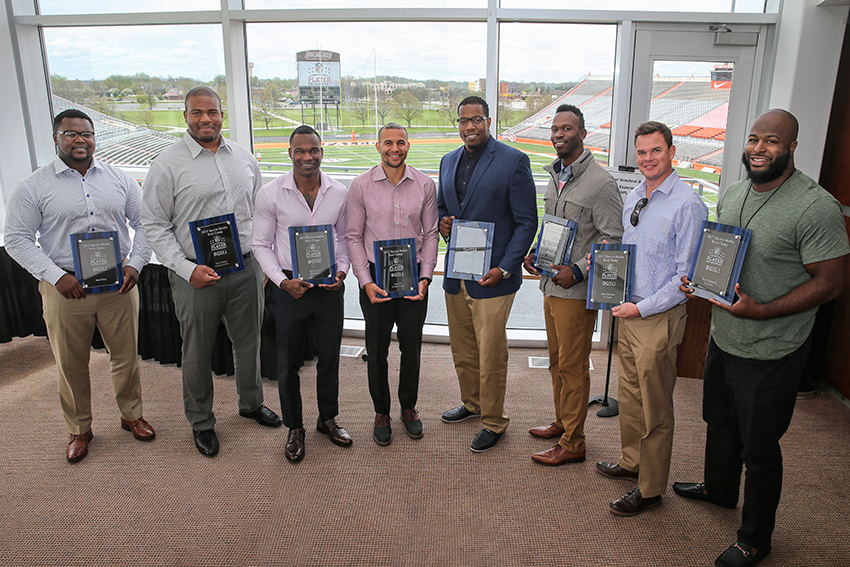 Dick Maxwell has worked with a lot of stars over the years, so he knows what they look like.

Maxwell got to show off one of Bowling Green State University’s most recent standouts, the Michael & Sara Kuhlin Center, to current and former professional football players April 19-22 during the fifth annual NFL Boot Camp: Sports Media. The Kuhlin Center is BGSU’s home of the School of Media and Communication, which debuted in fall 2016.

“The new Kuhlin Center is the star of the week for the fifth rendition of the NFL Sports Media Boot Camp," said Maxwell, NFL sports media coordinator. “Because of the expanded broadcast capabilities in the Kuhlin Center, we have been able to add several mock exercises this year that we could not have attempted in past years. I know the players are enjoying themselves and are learning a lot this week.”

Maxwell, a 1970 alumnus of BGSU, worked for the NFL for 36 years, including 29 seasons in the league office, and was the NFL's senior director of broadcasting when he retired in 2006. He founded the Maxwell Center for Sports Media at BGSU to assist students in the sport management and media and communication programs.

When the University plays host to the boot camp, athletes are provided an opportunity to strengthen their writing and on-air skills. They also pick up insightful feedback and mentoring from seasoned media professionals as well as faculty.

Among the players who benefited from the four-day media training were free agent running back Joique Bell and retired wide receivers Reggie Brown and Lance Moore.