It often seems that environmentalism and capitalism are mutually exclusive, but is there a way the two can coexist and even promote common goals? Award-winning author Hunter Lovins says there is. She will present “Creating a ‘Regenerative Economy’ to Transform Global Finance into a Force for Good” as this year’s Lamb Peace Lecturer at the University.

Lovins will speak at 7:30 p.m. March 28 in the Bowen-Thompson Student Union Theater (Room 206). Her talk is free and open to the public.

Lovins is president and founder of Natural Capitalism Solutions, a nonprofit formed in 2002 in Longmont, Colo. A renowned author and champion of sustainable development for over 35 years, she has consulted on sustainable agriculture, energy, water, security and climate policies for scores of governments, communities and companies worldwide. 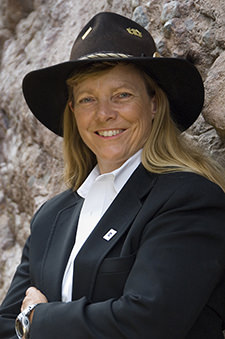 She has co-authored 15 books and hundreds of articles. Her best-known book, “Natural Capitalism,” has been translated into more than three dozen languages. Its sequel, “Climate Capitalism,” won the Atlas Award. She has taught at numerous universities around the world, was a founding professor of the Sustainable Management program at Presidio Graduate School and is currently a professor of sustainable management in the MBA program at Bard College.

BGSU co-sponsors include the International Relations Organization, Department of Political Science, Department of the Environment and Sustainability and the Peace and Conflict Studies program.