On a night that celebrated the past there were two clear winners for the future of the Slater Family Ice Arena: Bowling Green State University and the community. 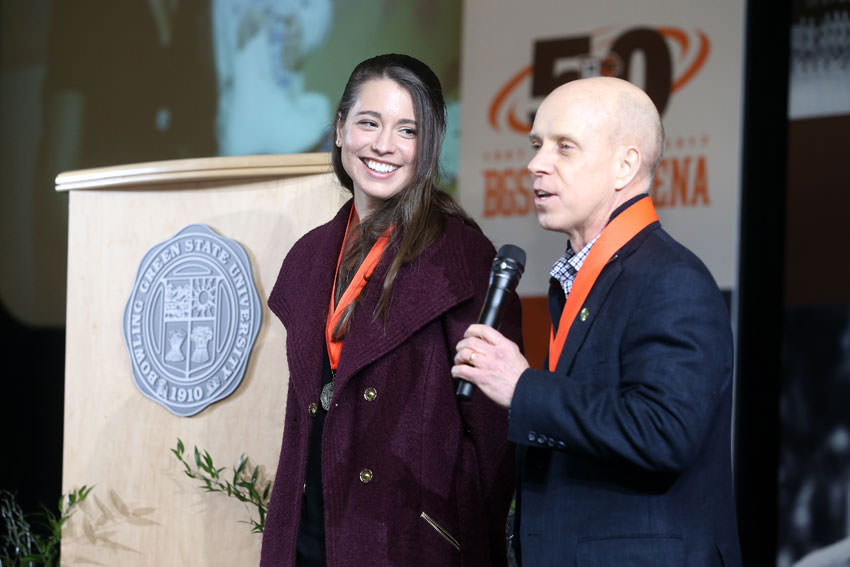 Figure skating greats Alissa Czisny '09 and Scott Hamilton '94 (Hon.)Those were the sentiments shared Feb. 11 during the 50th anniversary of the Ice Arena by BGSU President Mary Ellen Mazey; figure skating icon Scott Hamilton ’94 (Hon.); hockey dignitaries from the past half-century, and Scott Slater ’73, who along with his family recently gave a transformational gift of $2 million to ensure the future of the facility that means so much to them and the Bowling Green community.

“It’s an honor to recognize Scott Slater and his family tonight,” Mazey said. “The importance of private philanthropy allows excellence to continue at this great University and at the Slater Family Ice Arena. Leadership gifts, such as this one by Scott and his family, are changing lives for the world.”

The night dropped the puck on the celebration after the Falcon hockey team defeated Mercyhurst University 3-0 in front of a sold-out crowd. NHL broadcaster Mike “Doc” Emrick ’76 called the game with BGSU student Evan Pivnick.

Emrick, who earned a doctoral degree from the University, also served as the emcee of the event. He has been called the voice of hockey for his legendary NHL play-by-play broadcasts, and also was the lead broadcaster for the United States men’s and women’s hockey teams in the 2010 Winter Olympics. Emrick was inducted into the U.S. Hockey Hall of Fame in 2011.

“In the 50 remarkable years of serving Bowling Green State University and the regional community, the BGSU Ice Arena has borne witness to stories and people who have shaped the sports of hockey and figure skating, and who have become legends in their own right,” Emrick said. “This Ice Arena is far more than the walls and ice that give it shape and structure; it is a place where hope is ignited and dreams realized.” 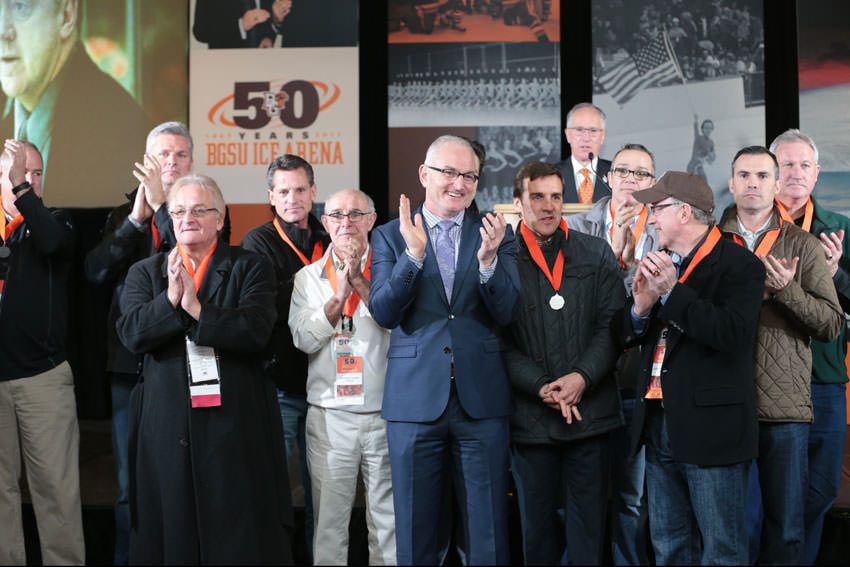 Visionary leaders Sam Cooper, Jack Vivian, Jerry York and Ron Mason, who guided BGSU to national fame and always pushed for excellence on and off the ice, were honored as well. Members of “The Originals” also were feted on stage in front of a packed house, with friends of the University lining the boards and commemorative glass of the practice rink.

Hamilton had a milestone to share with the crowd when it was his turn to take the stage.

“This is my 50th anniversary, too,” he said. “I was 9 years old when I started skating here on the first day the arena opened. I was talking to President Mazey on how this building unites the University and the community together like no other place in town.

“For a young guy growing up, these (hockey) guys were my heroes. They were great role models for all of us to aspire to. It’s truly a family arena and now the Slaters have put family at the forefront, and it’s so fitting.”

Slater, too, remarked on his fondness for the Ice Arena and the surrounding community.

“I have all kinds of memories in this arena, but it’s the people who make it great,” he said. “It’s truly a family place, and I’m truly blessed to have lots of family and friends. I thank you all.”

A pair of hometown figure skating champions remarked on getting their start at the Ice Arena.

“I just keep thinking back to all of the traditions at the Ice Arena and how the rink has evolved over the years,” said Hamilton, who won four consecutive U.S. and national champions and won a gold medal at the 1984 Sarajevo Games. “I’ve had so many life-changing experiences here. I’ll always cherish the memories.”

“It all started right here at this rink,” Czisny said.

Wells, who played on the “Miracle on Ice” team at the 1980 Lake Placid Games, said, “BGSU is home to me. I walked on as a freshman and had to work really hard to earn a scholarship my sophomore year. That hard work helped prepare me for the Olympics: We beat the Soviets. We had no fear.”

McPhee, who is the general manager of the new NHL expansion team the Vegas Golden Knights, was the top collegiate player his senior year and received the Hobey Baker Award.

“We had a terrific team that year,” said McPhee, who along with Falcon greats Mike Liut ’77 and Nelson Emerson ’90, among others, were seen signing autographs for fans in the lobby. “It’s great being back with so many Falcon greats celebrating BGSU’s hockey tradition.”

Holzinger was happy to be at the historic arena for the celebration.

“All the traditions behind the team here was one of the things that attracted me to come to BGSU in the first place,” he said. “It’s been a second home to me.”

Falcon Hockey Head Coach Chris Bergeron was pleased his team gave the night a fitting start with a win over Mercyhurst.

“It’s been pretty overwhelming to see all these guys come back tonight,” said Bergeron, who has coached at BGSU since the 2010-11 season. “I didn’t realize how passionate and deep this fan base was before I came to BGSU, but the fans and alumni have welcomed me with open arms.”

Never before has there been so much skating talent at the Ice Arena at the same time.

“Tonight’s the greatest game I have seen at BGSU — and it was a shutout — because you all were here,” Emrick said.