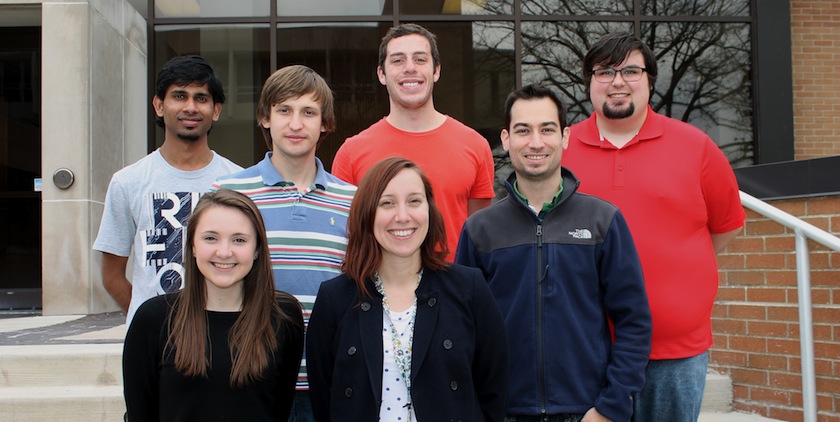 Alexis Ostrowski (center front) with her student team (back row, from left to right) Jayan Karunarathna, Anton Razgoniaev, Jackson Chory, Giuseppe Giammanco (who graduated in December), and Travis Green, and (bottom row left) Bethany Abbott. Abbott and Chory are undergraduates; the others are Ph.D. students.

Dr. Alexis Ostrowski’s childhood fascination with light and its properties led her to a career in photochemical sciences and a faculty position at BGSU. Since joining the chemistry faculty in 2012, she has published novel research on using light to control the mechanical properties of biomaterials and metal-containing polymers.

Ostrowski was recently named as one of 16 "Emerging Investigators in Inorganic Photochemistry and Photophysics” by the American Chemical Society and was featured in the ACS Select Virtual Issue. The 16 researchers, all of whom received their doctorates in 2004 or thereafter and are working in inorganic photochemistry and photophysics, were chosen based on papers published in such journals as Inorganic Chemistry and Chemistry of Materials.

Ph.D. student Anton Razgoniaev and recent Ph.D. graduate Giuseppe Giammanco are co-authors on the two papers published in 2016 and 2015 in Inorganic Chemistry and Chemistry of Materials, respectively.

The 16 researchers’ work “highlights the exciting diversity of research surrounding the utilization, generation and/or manipulation of photons (fundamental particles of light),” according to the ACS.

Ostrowski’s BGSU group’s research focuses on the development of photoresponsive materials that utilize metal coordination. The group is interested in understanding the fundamental photochemistry of these materials, specifically how the polymers affect the photochemical mechanisms and dynamics of the metal coordination groups.

Her group’s publications highlighted by the ACS build on research by students in her lab on a method of making biomaterials light responsive.

“These are just a few representative examples of new, promising classes of optomechanical materials that are poised to emerge from this laboratory,” wrote Dr. Felix Castellano in the editorial introduction to the virtual edition. Castellano is a former colleague of Ostrowski’s at BGSU’s Center for Photochemical Sciences.

Ostrowski received a bachelor’s degree in chemistry from Occidental College in Los Angeles in 2004. She then completed her Ph.D. in 2010 at the University of California at Santa Barbara (UCSB), where she received a National Science Foundation Integrative Graduate Education and Research Traineeship fellowship. After receiving her doctorate, she was awarded a National Institutes of Health postdoctoral fellowship at The Molecular Foundry, Lawrence Berkeley National Laboratory.