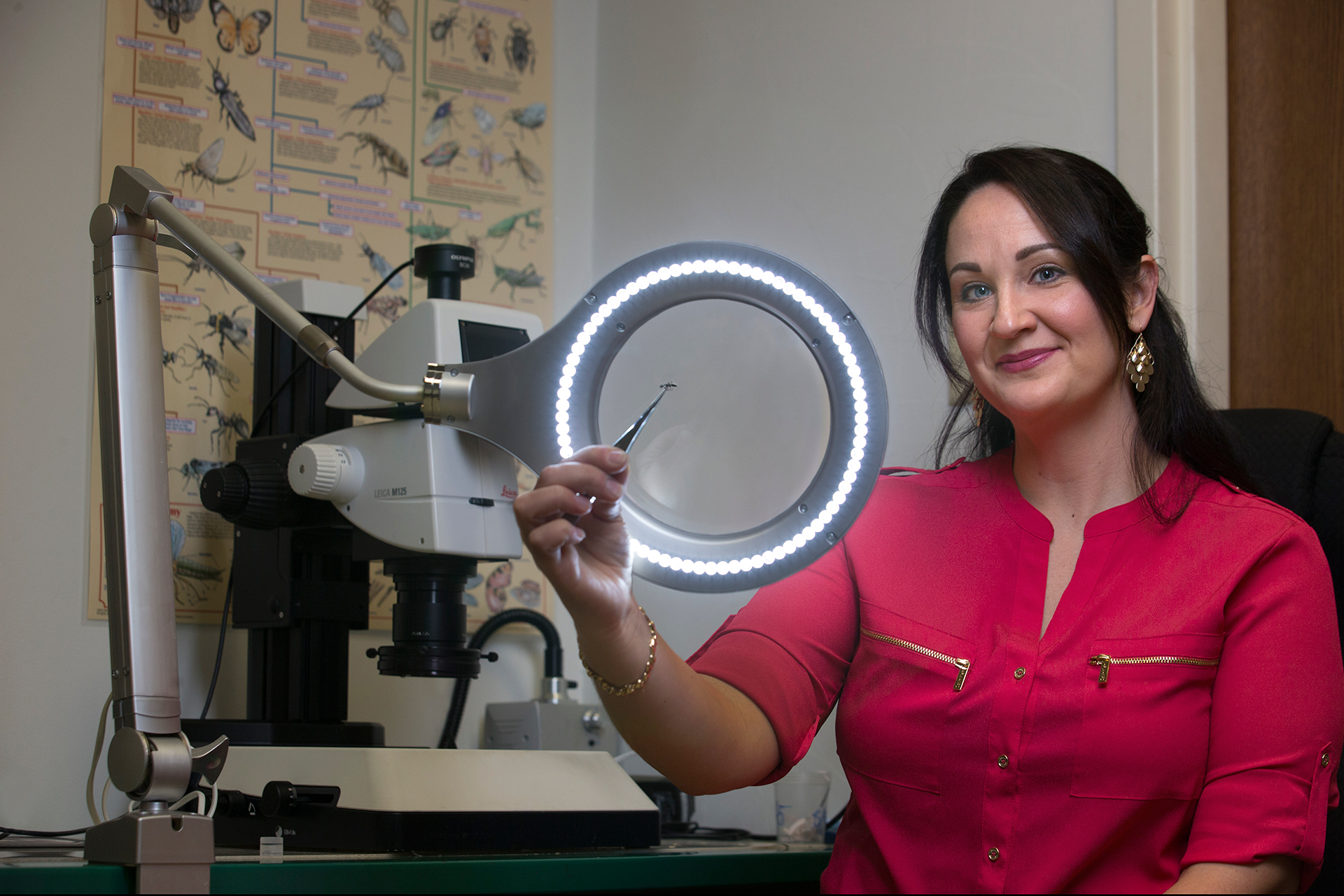 Shannon Pelini examines an ant in her BGSU lab.
Tweet

The world of forest ants may provide a macrocosm of the complex reactions and interactions among species affected by global climate change, according to a research project involving BGSU biologist Dr. Shannon Pelini.

As escalating amounts of carbon dioxide are introduced into the atmosphere, a chain reaction is induced, leading to increasingly warmer temperatures, Pelini said. This is taking place at an alarming rate, making it more important than ever that we understand how climate change will affect our natural world.

Many scientists have attempted to tackle this issue by determining the thermal tolerance of various species, then predicting what will happen to them as our world warms. However, this approach as a way to understand nature has its drawbacks because one species never acts alone. Individuals are constantly interacting with other species and the environment in which they live, so comprehending how global change impacts these interactions is crucial to a holistic understanding.

Pelini and her colleagues have made significant progress in this direction with their new study, “Climatic Warming Destabilizes Forest Ant Communities,” which looks at complex interactions of ant communities and their responses to warming. The study was published in the Oct. 26 edition of the journal Science Advances, and has received wide attention in other publications, including Harvard Forest, Phys/Org  and Science News.

Funded by the U.S. Department of Energy Program for Ecosystem Research and the National Science Foundation, the long-term experiment looked at the interactions ants exhibit over nesting structures in two distinctly different geographical areas. As a postdoctoral researcher at Harvard University, and in collaboration with investigators from the University of Vermont, the University of Tennessee and North Carolina State University, Pelini designed and built large warming chambers within Harvard Forest in Massachusetts. These chambers were also replicated in Duke Forest in North Carolina to provide a comparison to the cooler Harvard Forest.

Ant chambers at the Harvard Forest

“It’s one of the biggest climate change experiments in the entire world, which is a really exciting thing to be a part of,” Pelini said. “We were shooting for understanding what goes on with ant communities that exist in a cooler northern latitude and how their responses compare to the same suite of species in populations that occur in the warmer lower latitude.”

The researchers, led by Dr. Sarah Diamond, now an assistant professor of biology at Case Western Reserve University, placed artificial nest boxes in the warming chambers and checked them once a month for five years to measure which species of ants were utilizing them. They were interested to see if the ant species in the nest boxes would differ depending on the intensity of the warming treatment.

“We literally put heaters around the forest floor and warmed the ant communities up to see what would happen so we could more precisely ask how extinction and colonization and occupancy of these local habitats change,” Pelini said.

In fact, Pelini and her colleagues found some interesting and unexpected results. In warmer chambers, there was more occupancy of heat-loving ants, which is intuitive. However, less expected was the amount of time those ants were remaining in one single nest. Typically, ant colonies are constantly competing with each other for prime nest habitat, which promotes resilience to environmental changes within the community. When one ant species, like the heat-lovers, remains in a nest for a long time, there is less resilience in the community and so it is more likely to fall apart following a disturbance event, Pelini said.

According to Pelini, these results occurred for two reasons. First, warming will create an environment that preferentially selects organisms with broader or higher thermal tolerances. Second, those species that will do well under warming conditions will also have more opportunities to interact with other species that may or may not do as well under those conditions. The latter is something that current climate change models cannot capture because they do not focus on the community as a whole.

“I think the most exciting part of this experiment is being able to just watch the community and how it responded,” Pelini said.

Ants play an important role in the ecosystem of forests, dispersing seeds and keeping soil aerated and as a food source for other animals, Pelini said.

Although the study provided a new understanding of how climate change is going to influence a group of vital invertebrates that inhabit our soil, there is still much more to understand about this system and how it will respond to change.

“Ants are very charismatic; we know a lot about their natural history, their physiology, and their ecology,” Pelini said. “And I think we’re doing a good job linking physiology or using physiology to monitor what the impacts of climate change are, but we need to do more with behavior. So, that’s one direction in which I’d like to see climate change research move.”