A world of Indian music 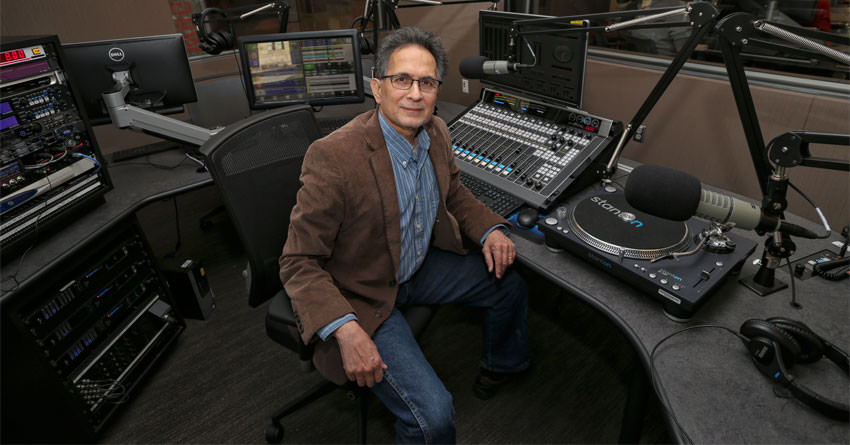 By day, Dr. Srinivas Melkote teaches media production and studies in the School of Media and Communication. But on Sundays, he becomes a radio DJ, hosting what is probably the only live show in northwest Ohio devoted to Indian music. With India’s long history and many distinct regions, religious traditions and dialects, it provides a never-ending source of material.

Melkote relishes it all. For the last 16 years, he has shared his vast collection of music with listeners to “Music of India and Its Diaspora,” which airs weekly from 2-4 p.m. on WBGU-FM, Bowling Green State University’s campus radio station, except during basketball season. The show is an education in itself, presenting a curated array of musical styles and time periods and, as its name indicates, music from Indians living around the world.

“Sundays are a kind of world music day on WBGU, and this is my contribution to that. I play different types of Indian musical genres, ranging from about the 1960s to the current day,” Melkote said. “I go to India every year and buy CDs and DVDs to bring back.”

Along with local listeners, “we’ve heard from people who listen online from California and as far away as Pakistan,” he said.

Music provides the soundtrack to everyday life in India. “There’s a history and tradition of Indian popular music from about the 1930s,” Melkote said, and he plays a wide variety of it. “Popular music is mainly film music, and may even be released ahead of time so it gets lots of play time. Every film typically contains five to seven dances and songs.”

The music and the films are actually much more diverse than is recognized in the U.S. and are part of a huge industry in India, producing many times more movies a year than Hollywood, Melkote said.

“For example, the Indian Hindi language cinema, centered in Mumbai, has the largest infrastructure of any in the world,” he said. But there are also the Kannada-language films, from the Bangalore region; and those in Telegu, from Hyderabad; in Bengali, from Calcutta, and in Tamil, from Chennai, among numerous others.

In addition to popular music, a Sunday show might include Carnatic classical music, regional folk music or even Indian hip-hop from the United Kingdom. “The Indian Punjabi dialect lends itself very well to hip-hop,” Melkote observed.

He is excited about his most recent discovery, “Chutney,” from Trinidad and Guyana, a fusion of lyrics in the North Indian dialect along with African drums and percussion and a Spanish-influenced beat, all with a Trinidadian lilt.

Other music from the diaspora might include Ghazal, with its Persian origins, or Qawwali, from Central Asia, a style popular in India and Pakistan as well as here in the United States.

“Most diasporan music is a fusion of local genres mixed with Indian styles,” he said.

Or on a Sunday you might hear Bhajan music, a meditative, trancelike style of singing in a call-and-response format.

Not only is his CD collection comprehensive, so is Melkote’s knowledge of Indian music. He can speak in depth about the distinctions between the Hindustani and Carnatic classical styles, which play the same ragas but with different beats, or talas; the similarities of regional folk music outside the cities to those two classical styles in structure and instruments, and the percussion traditions of the two styles, the Hindustani tabla and the Carnatic mridangam.

“Carnatic music is more traditional, while the Hindustani accepted a lot of influences from invaders,” he said. “They both have a 12-tone scale as compared to the Western eight-tone do-re-mi-fa-so-la-ti-do, with half-tones and quarter tones.”

Raised in South India, where music is important and it is common for children to study an instrument, voice or dance, Melkote’s was a musical family. His three sisters all sang and one went on to music college. His wife, Malavika, also studied dance as a child. It also helps that Melkote speaks Hindi, Tamil, Kannada and Telegu, in understanding the music.

While he has steadfastly held to playing his CDs and DVDs on his radio show, “the time has come to migrate to online sources,” he said. “For example, on the Saawan site, I can find any song by any artist from any year.”

Which will only expand the possibilities for listeners to “Music of India and Its Diaspora.”