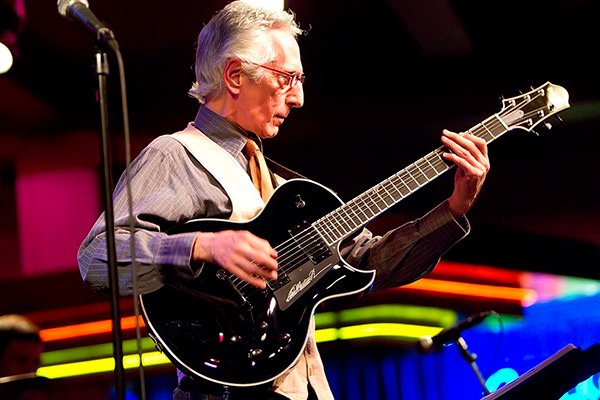 Jazz guitar legend Pat Martino headlines the second annual Orchard Guitar Festival at the University on Friday and Saturday (Oct. 14 and 15). Martino will bring his Organ Trio to the University for the two-day event, which kicks off with Marbin, a progressive jazz-rock fusion band based in Chicago.

Master classes (free and open to the public), performances, a jam session and a BGSU guitar alumni gathering round out the festival, which is funded by BGSU alumni Thomas and Martha Orchard. Thomas Orchard is a board member at the BGSU Foundation, and worked with both the College of Musical Arts and University Advancement to create the event.

On Oct. 14, Marbin will conduct a master class from 3:30-4:30 p.m. in the Choral Room at the Moore Musical Arts Center. That evening, they will perform at 8 p.m. at Grumpy Dave’s, 104 S. Main St. in downtown Bowling Green. A $5 cover will be charged at the door. Known for their “do-it-yourself-approach, the four-piece group has toured extensively across the United States since 2011 and has produced six albums.

Marbin’s performance will be followed by the Orchard Festival Jam Session at 10 p.m.

The concert will be held in the Thomas B. and Kathleen M. Donnell Theater located in the Wolfe Center for the Arts. Tickets can be purchased from the BGSU Arts Box Office at 419-372-8171 or visit www.bgsu.edu/arts. Advance tickets are $7 and $3 for students and children. All tickets the day of the performance are $10.

Martino has played professionally since 1961 and has toured since 1967. In July, he received the Jazz Legacy Award at the Philadelphia Clef. Born Pat Azzara in Philadelphia in 1944, he was first exposed to jazz through his father, Carmen "Mickey" Azzara, who sang in local clubs and briefly studied guitar with Eddie Lang. He took his son to all of the city's hot-spots to hear and meet Wes Montgomery and other musical giants.

Martino began playing guitar when he was 12 and left school in 10th grade to devote himself to music. During visits with his music teacher, Dennis Sandole, he often ran into another gifted student, John Coltrane, who would treat the youngster to hot chocolate as they talked about music.

Martino became actively involved with the early rock scene in Philadelphia, alongside stars such as Bobby Rydell, Frankie Avalon and Bobby Darin. His first road gig was with jazz organist Charles Earland, a high school friend. His reputation soon spread among other jazz players, and he was recruited by bandleader Lloyd Price to play hits such as “Stagger Lee” onstage with musicians like Slide Hampton and Red Holloway.

Martino moved to Harlem to immerse himself in the "soul jazz" played by Willis “Gatortail” Jackson and others. An icon before his 18th birthday, he was signed as a leader for Prestige Records when he was 20. His seminal albums from this period include the classics “Strings!,” “Desperado,” “El Hombre” and “Baiyina (The Clear Evidence),” one of jazz's first successful ventures into psychedelia.

In 1976, while performing internationally with his fusion group Joyous Lake, Martino began experiencing seizures, which were eventually diagnosed as arteriovenous malformation, a congenital brain condition. After surgery and recovery, he resumed his career when he appeared in 1987 in New York, a gig that was released on a CD with an appropriate name, “The Return.”

Today, Martino lives in Philadelphia again and continues to grow as a musician. As the New York Times noted, "Mr. Martino is back and he is plotting new musical directions, adding more layers to his myth." His experiments with guitar synthesizers (begun during his rehabilitation) are taking him in the direction of orchestral arrangements and they promise groundbreaking possibilities.