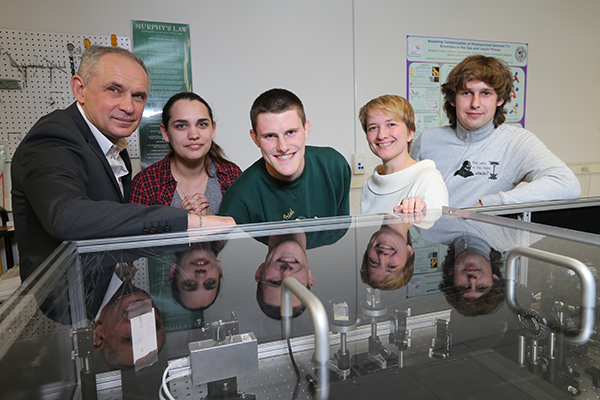 A BGSU photochemical sciences research team has shown that a new and unusual reaction path in chemistry occurs not only in the gas phase, but also in solution. According to Dr. Alexander N. Tarnovsky, the finding, which is important to atmospheric photochemistry, also establishes the direct link between chemical reactivity in the gas phase and in solution.

“Dissociation, the process of breaking a chemical bond, lies at the heart of chemistry,” Tarnovsky said. Dissociation of molecular bromine is one of the key steps in ozone depletion chemistry, so establishing the connection between bromoform and bromine is important in atmospheric photochemistry, he explained.

About 10 years ago, chemists discovered a novel reaction mechanism in dissociation reactions of gas-phase molecules, called roaming. In roaming, a fragment, which can be an atom or a group, moves away from the rest of a molecule, as if the molecule were breaking into two pieces. But instead, the fragment separates just enough to give itself some space, and then starts wandering around in the vicinity of the remaining atoms. If long-range attractive and repulsive molecular forces are fairly balanced, the fragment roams other fragments until it finds a second attractive domain or opens enough space for the other group or atom to move in.

The BGSU team showed that following ultraviolet excitation of geminal tribromides, including bromoform, what looks like simple fission of a carbon-bromine bond at first look is in fact isomerization (the process by which one molecule is transformed into another molecule with exactly the same atoms but in a different arrangement, and with different chemical properties) at fairly large distances via roaming of the molecular fragments. This new and unusual reaction path occurs not only in the gas phase, but also in solution.

Bromoform is abundantly produced by nature. The practical consequence of roaming isomerization of this molecule is that it is thought to be followed by elimination of molecular bromine, leading to an increase of the reactive stock of this species in the atmosphere.

Another immediate consequence of roaming is that it represents a deviation from the current chemical transformation paradigm, called transition state theory, and needs to be taken into consideration in practical applications requiring chemical reaction rates, Tarnovsky said. This is especially important in the liquid phase, where about 70 percent of chemical transformations take place.

Because the reaction path is a new finding, Tarnovsky said this research would be ongoing for quite some time, with additional papers planned for publication.