During his nearly 30-year career as an artist, John Balistreri has seen his ceramics exhibited in dozens of invited and juried shows both national and international.

But the professor and head of ceramics at BGSU has not had a time of shows as “high density,” as he puts it, as March 16-19, 2016. Those were the dates of the 50th annual conference of the National Council on Education for the Ceramic Arts (NCECA), convening in Kansas City, Missouri. And during those four days, work by Balistreri was part of four exhibitions occurring in conjunction with the conference.

In addition, he presented a pre-conference demonstration and lecture at a workshop with other graduates of the Kansas City Art Institute, where he earned his bachelor of fine arts degree in 1986. 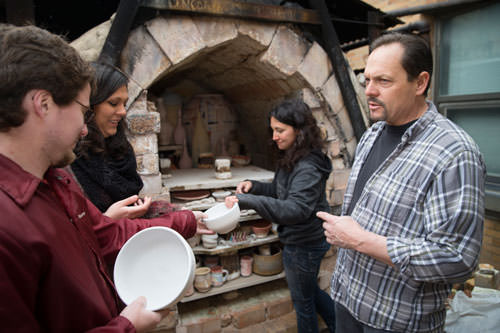 “It’s pretty rare,” said Balistreri about the volume of simultaneous activity (which also included exhibition of his work in another show, about technology and the arts, in Bellevue, Wash.).

“I think it’s really important because anybody who’s somebody in ceramics was there” at the national conference, he said. Roughly 5,000 ceramics professionals—including artists, educators, artist-educators and others who bring attention to the art form, such as writers—attended, he estimated.

“It’s a wonderful recruiting tool for BGSU,” Balistreri added, explaining that prospective students from all over the country go to the conference each year to see the exhibited ceramics. It’s an opportunity for those students to connect with Bowling Green, he noted, by talking both with him and, this year, with 20 current BGSU students. They were members of the University’s Clay Club who promoted the ceramics program at a booth at the event.

He is proud that so many club members went to Kansas City, he said, and of their efforts to raise money to help pay their way. The 20-year BGSU faculty member is proud, too, that the annual conference was “like a big BGSU reunion.” He guessed there were 100 conferees in Kansas City with Bowling Green backgrounds, including several of his former students who are now professors themselves. “I think that’s what it’s all about,” Balistreri said.

All four conference-related shows in which he was represented displayed examples of his large clay sculptures—which are as tall as 12 feet—and two of the shows also featured paintings, which he doesn’t often exhibit, he said.

The largest, one-piece sculptures, which also weigh up to a ton, are from a series titled “By and Large” that Balistreri completed a couple years ago at a studio in Omaha, Nebraska. Some needed more than a year to dry before going into a wood-fired kiln for another month.

“I figured that some of the large pieces only stood about a 50 percent chance of surviving,” the artist wrote on his website, pointing out that any design flaw could cause cracking that might not be seen until the firing in the kiln over a year later.

“I’ve worked my way up to that scale” in sculptures, Balistreri said. “A lot of engineering has to go into both the form of the sculpture and how it’s going to be moved,” he added. “If you don’t know what you’re doing, you’re going to have problems.” 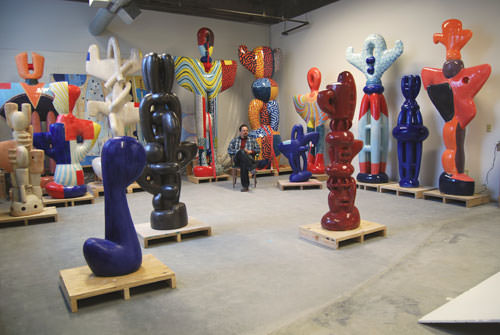 He has developed systems for moving the huge pieces, but doing so and getting them into the kiln is still “pretty scary stuff,” he acknowledged. “No engineer can tell you if it’s going to work,” he continued, and you don’t know until the finished product comes out of the kiln, maybe 18 months after the process began.

“I like to scare myself with clay,” he said, comparing increasing the scale of his work to figuratively pushing himself, with both having “an adrenalin component.”

The wood-fired method that Balistreri prefers was embraced by other ceramic artists beginning in the early 1980s, when he was a student and built his first kiln—among the first of what are now hundreds of such kilns in the country, he recalled.

Invented in China some 4,500 years ago, the method has gained appeal in the U.S. recently because the fire hits the ceramic work directly, creating flame patterns (“flashing”) that make dramatic patterns, Balistreri explained. In addition, flakes of ash from the burning wood land on the work and melt into a glaze.

He said such “contamination” from wood was once regarded as a flaw from which ceramics had to be protected by being placed in boxes for firing. But an aesthetic eventually started to develop around the imperfections, he noted, saying that clay is “essentially a really finely ground dirt that came from rocks years ago, and the kiln forms it back into a rock.”

To Balistreri, part of the wood-fired method’s appeal also derives from nonstop firing of the kiln for six days for his large pieces. Crews of students help with the process, which becomes “an art event in itself” and a teaching tool, he maintained, as younger students learn from their older peers. “So it brings everyone together,” he said.

One of his first large, wood-fired works was also on exhibit during the conference in Kansas City. Balistreri pieced together 170 previously fired objects for the nine-foot “Reminiscentia,” which represents his evolution as an artist from 1988—when he earned his master of fine arts degree from Kent State University—until 1994.

He pointed out, however, that the sculpture’s part in his cluster of shows was a coincidence—the collector who owned “Reminiscentia” donated it to the Kansas City museum that, after learning the ceramics conference was coming to the city, saw an opportunity to display the piece. Coincidental, too, was the of the April 2016 issue of Ceramics Monthly, which ran a story about his “By and Large” series that was written over a year ago.

Chance aside, though, there’s little doubt that Balistreri and his work have been getting their share of attention in ceramics circles. Maybe, he said, “the stars aligned.”