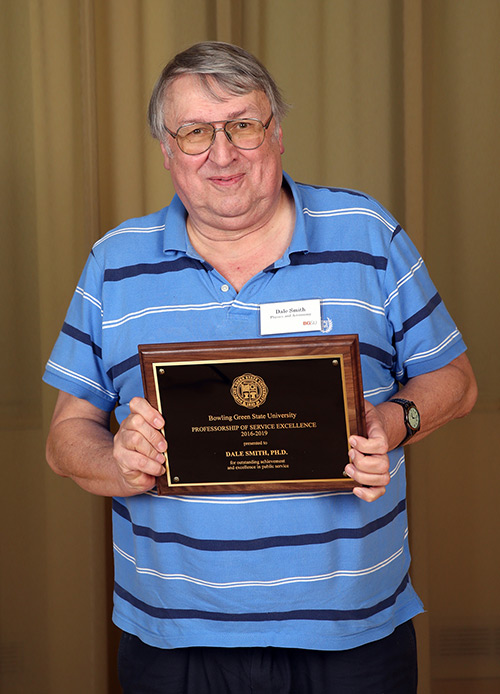 Dr. Dale Smith, professor of physics and astronomy and BGSU Planetarium director, has committed himself to service for more than 30 years – developing curriculum, overseeing the Planetarium and advancing the planetarium field and profession domestically and internationally. As a testament to his service, dedication and commitment, Smith was named the 2016 Professor of Service Excellence at the Faculty Excellence Awards Ceremony April 14.

“Dale Smith has performed exceptional service to Bowling Green State University and the community for over 30 years,” wrote Dr. Raymond Craig, dean of the College of Arts and Sciences. “He is certainly deserving of this honor.”

The title of Professor of Service Excellence is conferred upon members of the faculty who have established national and international recognition through professional service, public service and/or external engagement through their work at the University. The title is awarded for three years and includes an annual stipend of $5,000, $2,000 of which will go toward professional development.

Since coming to BGSU in 1983, Smith has overseen the development of the Planetarium and has created many of its public programs. He teaches a variety of courses in the Department of Physics and Astronomy, supervises the department’s stargaze program and conducts the Planetarium’s public programs, as well as its programs for school classes and other visiting groups.

In addition to his 30 years of service to BGSU and the community, Smith has also served as president of the International Planetarium Society (IPS), the highest elected office in the planetarium profession, and as IPS Publications Chair and editor of the IPS Directory of the World’s Planetariums and Vendors. As part of his involvement with the society, Smith has visited planetariums and attended national conferences on all continents, traveling roughly 200,000 miles. He also played a key role in the creation of national planetarium societies in Spain, Australia, India and Brazil, helping to expand the IPS into a global society and reflecting his philosophy that “planetariums are theaters of science education that can unite people under a common sky.”

He has also served as president of the Great Lakes Planetarium Association (GLPA), as editor of its conference proceedings and in other roles. Because of his work as GLPA proceedings editor, he has been selected as proceedings editor for a national U.S. planetarium conference to be held in 2017. In recognition of his entire body of work with the GLPA, he was selected as the inaugural recipient of its highest award, the Galileo Award, which was created in 2003 to honor exemplary service work in extending the association to the international stage. In 2014, he was the co-inaugural recipient of the GLPA’s new Mentor Award, which was created to recognize exemplary service in mentoring the next generation of planetarians.

Smith has directed the BGSU Planetarium since it opened in 1984. He says this work includes a unique combination of intertwined service, teaching and creative activity. He estimates that he has served tens of thousands of visitors, of all ages, at Planetarium events open to the community. More than 70 shows are available, more than almost any other planetarium, and include live interactive, multimedia and workshop-style formats. These shows now feature full-dome video projection, which he was instrumental in having installed at the Planetarium.

Along with the digitizing of thousands of images and dozens of soundtracks, Smith hopes that using the potential of full-dome video will “serve BGSU for years to come, even after [he retires], as it assures that the robust roster of programs we have built up will remain available to all.”