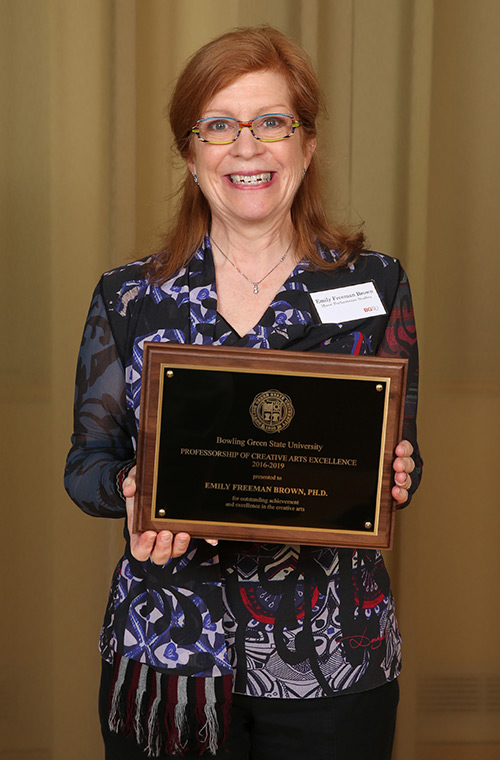 There have been many high notes during Dr. Emily Freeman Brown’s 33-year career at Bowling Green State University.

Brown, who has a Ph.D. in music performance studies, has been named the 2016 Professor of Creative Arts Excellence.

The title is conferred upon members of the faculty already holding the rank of professor and who have established outstanding national and international recognition through research and publication or creative/artistic achievement in their disciplines. The title is for a period of three years with an annual stipend of $5,000 — a $3,000 salary stipend and $2,000 for professional development.

“Dr. Brown’s record of creative activity is stellar in every way and she maintains a national and international profile as an orchestral conductor and music educator,” said a letter of nomination, composed by a committee of Drs. Rodney Rogers, provost and senior vice president; William Mathis, chair of music performance studies; and Marilyn Shrude, professor of music composition. “The quantity of her creative output is remarkable and the quality and prestige of her work has only grown through the years.”

Last year, Brown released a book, “A Dictionary for the Modern Conductor,” published by Rowman and Littlefield.

Guest conducting appearances make up the majority of her creative work, the nominators said.

“Her record in this regard would qualify her consideration of this award by itself,” they said. “Her new book, publications and presentations and associated scholarship throughout her career are significant and lend an added dimension of prestige to her profile.”

On two occasions, Brown has been invited by the U.S. State Department to lead cultural arts activities: in 2003 with the Latvian National Symphony Orchestra in Riga, Latvia, and a 2006 concert with the National Conservatory Music Orchestra in Astana, Kazakhstan, in celebration of the opening of the new American Embassy.

Performances in the United States include guest appearances with the University Choral Society in Ann Arbor, Mich.; Cleveland Chamber Orchestra, Eastman Philhamonia and Virtuosi at the Eastman School of Music in Rochester, N.Y.; and the Festival Orchestra of the Chautauqua (N.Y.) Summer Institute.

Since 2008, she has taught an Orchestral Conducting master class at the Free University of Berlin.

In 2007, she organized a conducting workshop for the Conductors Guild held on the BGSU campus. Internationally prominent conductors Leonard Slatkin and Gustav Meier joined Brown in presenting classes for the workshop.

Under Brown's leadership, the Bowling Green Philharmonia has produced a series of recordings entitled “The Voice of the Composer: New Music from Bowling Green” on the Albany Records label.