A lifetime of achievement 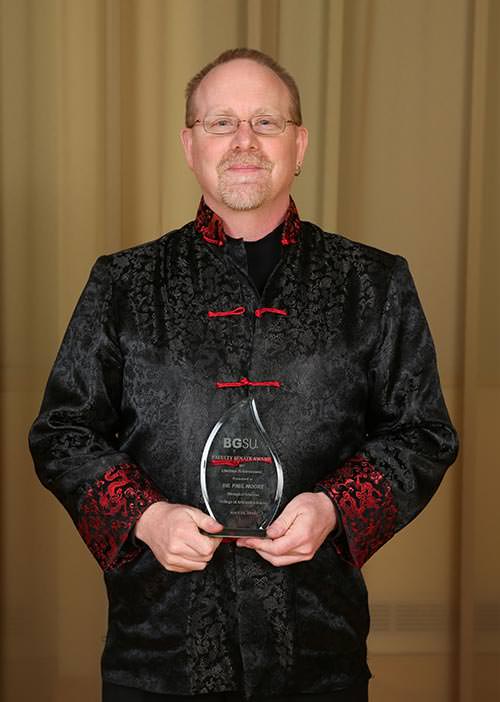 Even if faculty achievement were measured purely in terms of student mentoring and success, Dr. Paul Moore, a professor of biological sciences, would be tops. But his contributions to the educational community at BGSU extend far beyond that.

Moore received the Lifetime Achievement Award from Faculty Senate and with it, $1,000, at the April 14 Faculty Excellence Awards.

“By all measures, Dr. Moore has excelled in research, teaching, and service since he started here in 1994,” said nominator Dr. Jeffrey Miner, a professor and chair of the Department of Biological Sciences. “He was hired as the director of the Marine Biology Laboratory, and he helped elevate this notable, but small, undergraduate program into a powerhouse of undergraduate education (and recruitment) in Biological Sciences.”

Miner described Moore as a “passionate, demanding instructor who has completely embraced engaged, inquiry-based teaching in his classrooms and the biology laboratory courses he supervises.”

Moore has been the primary mentor for more than a dozen Ph.D. students and more than two-dozen master’s degree students, said nominator Dr. Daniel Wiegmann, associate professor of biological sciences.

“Nearly two-dozen undergraduates have also gained invaluable hands-on research experience under his guidance in his laboratory,”  Wiegmann  said. “The number of students he has mentored is impressive, and it is even more impressive that a large proportion of his students have transitioned into successful careers in biology. He and his students have published nearly 70 papers since he arrived at BGSU and the research conducted in his laboratory has been covered by the popular media.”

Moore led the emergence of the marine specialization through the mid-1990s, and was instrumental in organizing and developing the J.P. Scott Center for Neuroscience at BGSU, an undergraduate and graduate cross-disciplinary program, Miner said. The neuroscience major now has about 75 majors.

“He has also served in a number of administrative capacities where he eﬀected substantive educational experiences for our undergraduates,” Wiegmann said. “From 2002-12, Dr. Moore was the director of the Honors Program and in that capacity he established the core curriculum for the honors program and created the Presidential Honors Program.”

In addition to his contributions to education, “Dr. Moore is a top researcher, no question,” Miner said. “He has received National Science Foundation support, he has published 69 research manuscripts, six book chapters, and recently produced a highly successful popular science book in his area of research specialization —  olfaction and the use of smells by organisms throughout the animal kingdom. He was nominated for the Outstanding Young Scholar early in his career here.”