The art of organization

Kristin DiBacco ‘06 was born to organize.

Her passion for organization and helping people has evolved into her successful business, The Serene Space, which has been featured on the TV series “Hoarders.”

“I guess you could say for all of my life I have been organizing for friends and family. It’s just innate, a part of me,” said DiBacco, who majored in human development at Bowling Green State University.

Her time at BGSU helped plant the seeds to her current career.

“I had full course loads each semester and took part in several extracurricular activities plus I had a part-time job,” DiBacco said. “During my four years at BG I learned to balance my time and manage multiple classes and projects as well as my social life.”

DiBacco had an internship during her senior year, which led to another important skill. 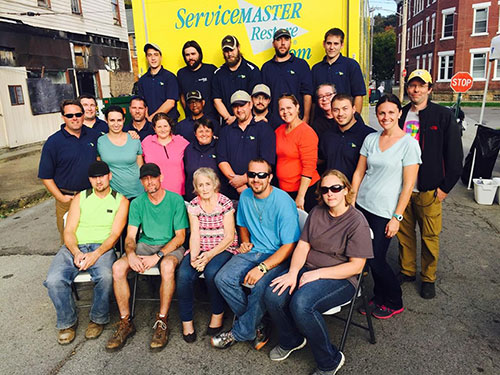 “During my internship I had to give several presentations,” she said. “That internship helped me face my fear of speaking in front of others. I am forever grateful to my time at BGSU and the classes and teachers that helped me with my organizing skills because I have been able to turn that into a full-time business helping both students and adults.”

When DiBacco graduated, she originally wanted to be a teacher, but because she and Falcon Flame husband, Todd ’06, moved frequently for his job that plan never materialized. Ultimately, she did a lot of research and soul searching and came up with a plan to be a professional organizer.

“I realized this is what I want to do and just waited for the perfect time,” said DiBacco, who lives with her family in Cranberry Township, Pa., a suburb of Pittsburgh. “We moved around quite a bit and once we settled in Pittsburgh about three and a half years ago, I said, ‘OK, it’s time.’

In 2012, DiBacco started The Serene Space, helping residential and commercial clients with their organizational needs.

“It might be somebody in their home that just has a lot of clutter, and they want to simplify things and create systems to facilitate that,” she said. “I also work with people in corporate settings, whether it be time management or just being more efficient throughout the day with their business.”

DiBacco, who grew up in Hudson, Ohio, said getting organized is one of the top New Year’s resolutions, but it’s hard figuring out where to start.

“The biggest thing that I find is people want to get organized, but they’re overwhelmed with where to even begin, and even if they do have a goal in mind, it’s having that motivation to continue and tackle the projects,” she said. “It’s funny, maintenance is so much of what we do every day. Doing the dishes and doing the laundry, that’s 80 percent of it. But for the folks that don’t have a good system in place already, that chaos by the end of the week and the end of the month and all of that just continues to build and build—it is overwhelming and stressful.”

That’s where DiBacco comes to help restore calm. A typical client is anywhere from a young professional who’s just getting started to a busy working professional mother.

“That’s definitely something I can relate to the most because I do have children and I’m married, so I’m right in the middle of that,” said DiBacco, who is mother of two boys: Croix, 6, and Chase, 3. “But then I also have clients that are downsizing so that they may be in that stage of life where the kids have left the home and they’re ready to transition into a smaller house. So, there’s really a vast array.”

Recently, DiBacco’s zeal for organization and devotion to helping others resulted in an appearance on the A&E series “Hoarders.” In the second episode of Season 8, “Roxann & Barbara,” DiBacco helped a Beaver Falls, Pa., woman suffering from hoarding disorder.

According to the Mayo Clinic’s website, “hoarding disorder is a persistent difficulty discarding or parting with possessions because of a perceived need to save them. A person with hoarding disorder experiences distress at the thought of getting rid of the items. Excessive accumulation of items, regardless of actual value, occurs.”

"Hoarders" host Matt Paxton asked DiBacco and three other professional organizers in the Pittsburgh area to help with the project that aired Jan. 3.

“We worked with a lady named Barbara, a mother of 10 children who are all grown, and she has hoarding disorder,” DiBacco said. “We went in as a team. There was a company called Service Master and their main goal was to clear the home and then the organizers worked with Barbara and just helped her make decisions, deciding what she should hang onto and what she should let go of.

“Then, anything that she decided she was going to keep we sorted into different boxes. So, whether it was gardening supplies or things for the kitchen, maybe things you can use for office supplies, we sorted those and put those into boxes for her to be able to use in the future.”

Dibacco said the experience was physically and emotionally exhausting, but she would welcome the opportunity to be on the show again.

“You kind of lived in Barbara’s world for three days,” she said. “For Matt, for someone who does this professionally, this was one of the top five challenging homes he’s ever been in for 'Hoarders.' So, it was hard. You just want to give Barbara lots of love.

“The biggest thing that I’m super pleased with having been on the show is just helping raise awareness for hoarding disorder. It’s not something somebody chooses to live with. 'Hoarders' is there to help raise awareness.”

In addition to helping people with The Serene Space, DiBacco helps out other BGSU alumni in the Pittsburgh area.

“I help lead the Pittsburgh Alumni Network,” she said. “I get so excited when I meet others from BG. There is an instant connection with other grads no matter what year you graduated.”

DiBacco said the team is trying hard to grown the Pittsburgh Alumni Network. One of last year’s biggest turnouts was a Pirates game at PNC Park. The network already another Pirates game scheduled for August. Get connected with the BGSU Alumni Network in your area!