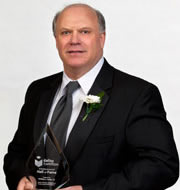 William J. (Bill) Centa, a 1974 Bowling Green State University alum with a BS in Business Administration has been actively involved in financial and business management for more than 30 years. Bill received his MBA from Cleveland State University in 1977.

Bill acquired and grew Mayfran Holdings, Inc, a 70-year old Cleveland company 150% in less than 6 years. Mayfran International is a global manufacturer of engineered automation systems and equipment for metalworking, metal forming, recycling, solid waste processing and other operations. Bill also worked as Associate Director of Mergers & Acquisitions for Ernst & Young LLP, and Chief Operating and Financial Officer for iPower Logistics. He was a co-winner of the Ernst & Young Entrepreneur of the Year 2009 award and recipient of the Global Business Leadership Award.

Bill is active in the BGSU Cleveland/North Coast Chapter of the Alumni Association and in the Cleveland community, where his charity work includes the Juvenile Diabetes Association, the Kidney Foundation, and United Ways of Cleveland and Lake County. In 2008, he was the recipient of the Global Business Leadership Award presented by The Rotary Club of Cleveland and Cleveland State University.