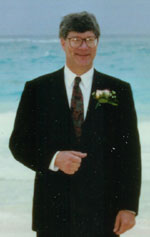 After graduating from BGSU and leaving his childhood home in Sylvania, Ohio, William Carl moved to Florida to work for Burroughs Corp. He met James Maynard there and the two teamed up and opened a family steakhouse in Fayetteville in 1972 called the Golden Steer, which later was renamed Golden Corral.

Through Mr. Carl's leadership, it inspired many managers of individual Golden Corral restaurants to become partners. The company operates and franchises about 470 family dining restaurants throughout the U.S. The chain serves a variety of steak, chicken, and pork entrees along with its Golden Choice Buffet, which offers a plethora of hot and cold foods and bakery items. More than 350 of the restaurants are operated by franchisees; the rest are company-owned.