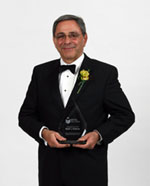 Bob Battaglia is a serial entrepreneur having founded, built and sold five companies for profit. His first job was with Libbey Glass in New York. After seven years he left that job and, after traveling around the world for a year, embarked on his first entrepreneurial ventures in Hong Kong. There, he founded the first non-Asian owned men’s and women’s custom tailoring business, the first jeans shop, the first unisex hairstyling salon and a guidebook to Hong Kong. He also started an international trading company which imported men’s accessories and exported US Navy uniform raincoats. All of those businesses were sold to Hutchison Whampoa, Ltd., the second largest company in Hong Kong. Next, he moved to Manila, Philippines, where his company had introduced brick oven pizzas and operated eight pizza-based Italian restaurants in the metro Manila area. He sold that company to a local, diversified retail company.

Upon his return to the US, he bought Snow Lion, Inc., a bankrupt multi-million dollar company that manufactured sleeping bags, backpacking tents and down outerwear. He brought the company back to life and sold it two years later. He then used his continuing interest in food to found Fettuccine Bros. in San Francisco which introduced fresh pasta and sauces to the Bay Area. In addition to a pasta café, the company also operated two retail stores. Their award-winning products were sold in supermarkets throughout California and many of the upscale restaurants in San Francisco used their fresh pasta. He sold all of the supermarket business to Kraft, Inc. where it was then branded DiGiorno.

Bob is co-founder, chairman and CEO of his sixth and current business, One Legal LLC, formerly known as Fax & File Legal Services, in Novato, California. The company created the fax court filing business in the US in 1990 when it filed the first facsimile legal document ever filed in a state court. Until that time, courts would only accept original documents for filing because of the widespread, yet incorrect, belief that an original signature was required to make the document legal. Since then, many millions of facsimile documents have been filed in courts across the US and the electronic (eFiling) of state and federal court documents is now commonplace. One Legal has transitioned from a paper-based business to an electronic one in that 98% of the documents it files in courts come from their customers via the Internet. They do court filing in 15 states plus document retrieval, court research and process serving, in all 50 states. They also do eFiling, where the document never gets printed, in several California counties and in Texas. The company currently has more than 25,000 customer accounts consisting of law firms, corporate legal departments and state and local agencies.