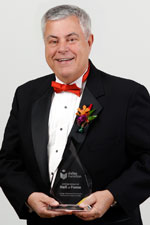 John Harbal, II was a Bowling Green State University Schmidthorst College of Business graduate with a major in marketing and a specialization in selling & sales management.

He was employed ten years with the Colgate-Palmolive Company as a Sales Representative, Area Sales Manager and Regional Sales Training Executive, and spent two years at Airwick Industries as a National Accounts Manager.

In 1985, John joined Impact Products, a family-owned business. He started as the National Sales Manager, moved on to V. P. of Sales & Marketing, and in 2001 became Chairman & CEO of Impact. Between October 2001 and September 2010, the company doubled sales and quadrupled in value. John retired in 2010.

John's recognitions include being a finalist for Ernst & Young's Northwest Ohio Entrepreneur of the Year Award and he was the recipient of the Entrepreneurial Business Excellence Award for the Davenport-Longenecker Lifetime Achievement Award for Business Advocacy.

John served on the Genoa Board of Education and was President for three years. He served on the Board of Trustees for Bowling Green State University, currently serves on four corporate boards, and has been active in his church and church leadership opportunities as well as in Fellowship of Christian Athletes of Northwestern Ohio.