Today’s business economy is global so BGSU’s College of Business goes beyond the usual in preparing our students to be global-ready through not only our curriculum but exciting opportunities to study abroad in a highly successful education abroad program. The College of Business has agreements with several universities in Europe and Asia where students can study abroad one or two semesters. BGSU has one of the larger undergraduate education abroad programs compared to other universities and works with students as early as their freshman year to develop an academic schedule over four years to allow time for an education abroad experience. 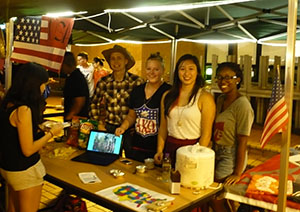 Julie Thielman is a junior and also a College of Business Student Ambassador who is studying fall semester at Hong Kong Baptist University (HKBU). One of the activities she was involved with was the International Festival hosted by HKBU.  Serving as an Ambassador for BGSU, she and fellow Falcons Izzy Nelson and Christopher Workman, planned a USA booth for the festival to promote BGSU and America, in general.  “The booth had food such as cheddar Sun Chips, sour cream and onion Lays potato chips, and Jambalaya (a spicy southern dish with meat, seafood, and rice).  Students and teachers loved it so much they were coming back for seconds and thirds,” according to Thielman.  “Also we had a Prezi slide show of pictures from around the country, and we had an interactive game where people would draw a slip of paper with a state on it and try to match the name with the state on the map.”  During the fashion show part of the festival, students from countries around the world wore their traditional clothes. Workman dressed in cowboy boots and a cowboy hat to parade around in the fashion show.   Thielman adds, “Overall, the experience was incredible!” 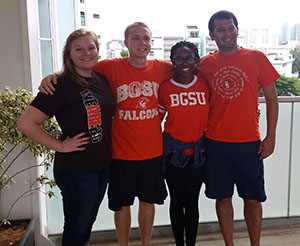 In addition to the booth, Thielman and her fellow Falcons studying at HKBU also show school spirit by dressing in BGSU gear on Fridays.  Here is a photo of Thielman with BGSU students Workman, Nelson, and Pedro Petribu. 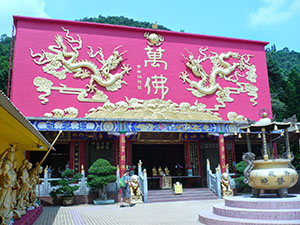 Thielman is fully immersed in the culture and is sharing her unique experiences through a blog. One of her sightseeing trips took her to an outlying island called Cheung Chau where she sampled interesting food and explored caves thought to be used by pirates long ago. She is helping 15 students learn to speak English better and was able to explore Hong Kong during time off of school to celebrate the Chinese National Day in early October. 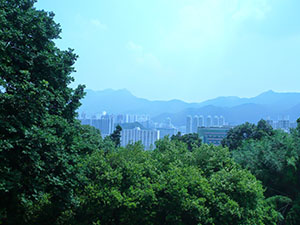 Thielman visited the 10,000 Buddha Monastery. She states, “Boy was it an incredible sight!  It sat atop over 400 steps (and we couldn’t have picked a hotter day or time to climb them)! Lining the steps the entire way were golden statues portraying what I believe were monks. Once you finally reached the top of the stairs, the view is incredible!” The BGSU business student was able to take photos outside the temple.

You can read more about Thielman’s experiences in Hong Kong by clicking to her blog.