Ludwig and Wolf are Winners of the BGSU Sales Competition 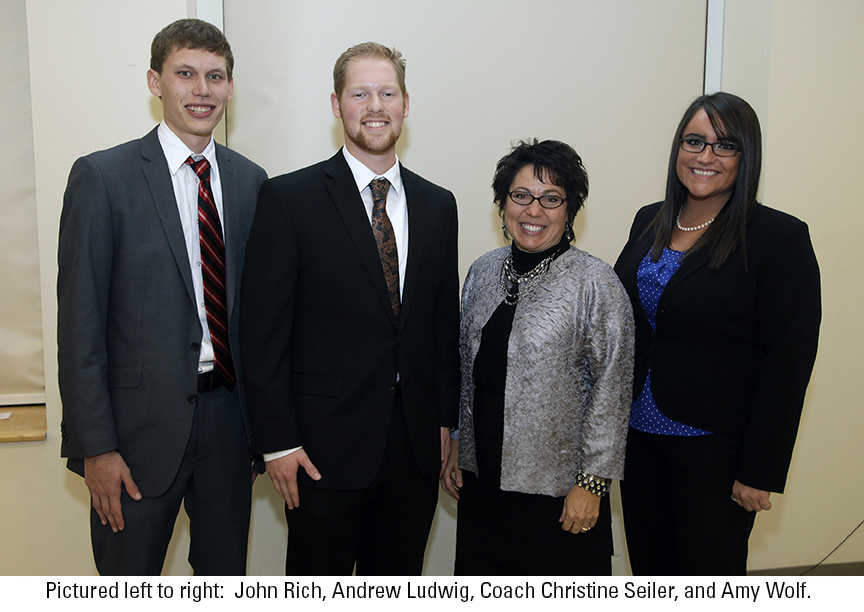 The top three winners of the BGSU Sales Competition were announced at the Sales Awards Banquet held in the Bowen-Thompson Student Union. Traditionally, the BGSU Sales Competition has been highly competitive, but this year the competition was especially fierce with first and second place winners’ scores separated by two-tenths of a point. Winning the competition was Andrew Ludwig, a marketing student, with Amy Wolf, who is specializing in sales and services marketing, earning second place. These two students win an automatic berth to the National Collegiate Sales Competition in April. John Rich, majoring in liberal studies, captured third place and will serve as an alternate in case one of the top two can’t compete.

In September, 15 students, one of the largest groups of students, were selected to compete in this year’s competition which is hosted by the Department of Marketing’s Service Marketing Institute. In October, each finalist recorded a 15-minute sales role-play based on a case that had students portraying a salesperson for Marathon Petroleum Company selling the Coca-Cola Freestyle Program to the owner of a gas station/convenience store. The soda program features a fountain dispenser which offers over 100 different Coca-Cola options.

Representatives from the sales competition’s presenting sponsor, Marathon Petroleum Company, along with representatives from 14 other company sponsors, viewed the fifteen recordings and evaluated them. Marketing department lecturer, Ms. Patti Hanna-Garlitz, served as the faculty judge.

The BGSU Sales Competition and the Sales Award Banquet are organized by Ms. Christine Seiler, associate director of the Service Marketing Institute, and she serves as the sales team coach. Ludwig, Wolf, and Rich will work with Seiler over the next several months to prepare for the national competition.