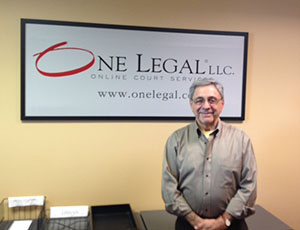 Bob Battaglia has been a serial entrepreneur since graduating from BGSU in 1960 and has launched six successful businesses.  His international ventures have included several clothes-related businesses, a unisex hairstyling salon, a trading company, and a pizza based restaurant chain. Domestically, he started a sleeping bag company and a pasta company, Fettuccine Bros., which he sold to Kraft, Inc. who changed the name to DiGiorno.

Battaglia co-founded his California company Fax & File Legal Services, Inc. in 1990. The BGSU graduate initially spent his time trying to convince California courts that an original signature was not needed and faxing court documents for filing was legal as well as more convenient than mailing documents or driving documents to a court.  Battaglia states, “Overcoming the widespread, but false, belief that an original signature was required on all documents filed with any court was a challenge.  It was a myth that had been passed from generation to generation of lawyers but had no basis in fact.  We challenged the myth and were successful in changing habits.”

His company was the first one to file an electronically transmitted (faxed) court document with a state court.  In 2003, Fax & File Legal Services was renamed One Legal, as Battaglia notes, to not be associated with the outdated facsimile  technology. Today One Legal has more than 25,000 accounts nationwide with law firms, corporations, insurance carriers and state and local agencies providing services such as court filing, process serving, eFiling, and eService.

When asked what differentiates One Legal from its competitors, Battaglia says, “Technology, integrity, reliability, and superior customer service.”

The 2008 BGSU Dallas-Hamilton Entrepreneurial Hall of Fame inductee isn’t satisfied with One Legal’s current services just yet.  Battaglia has added another facet to the company, a legal technology incubator, called One Legal Labs, designed to develop new and innovative tools. His software engineers and developers are working with law students and entrepreneurs to produce high-tech tools for the nation’s court system which has been slow to adopt technology.

While he is pretty much retired (he goes into the office one day a week), Bob is very actively involved in charting the direction of the company. Who knows where this seasoned entrepreneur will take the legal document system with the latest technology and social media tools? Perhaps drone delivery is a possibility in process serving. "With the amazing pace of technology, drones might not be that far-fetched.  Although we routinely serve documents on people electronically, certain documents must be physically ‘served’ on a person.  But who knows how that might happen in the future?”

Battaglia has advice for someone thinking about starting up a business. “I think that a successful entrepreneur needs only average intelligence, a healthy sense of curiosity,  a willingness to take risks, prepared to work very hard and persistence.  Believe in yourself and your idea even though others may try to dissuade you.  I have been involved in a number of situations where the ‘experts’ were wrong.”