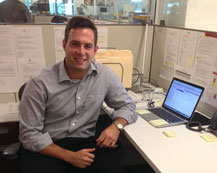 From the ball diamond at Bowling Green State University to one of the major “gems” of advertising agencies in New York City, Chris Miller took his marketing degree, along with strong perseverance, and networked his way to finding his “dream job” in the Big Apple with some help from BGSU marketing faculty members.  The 2014 College of Business graduate and former Falcon pitcher was determined to find an advertising job in New York City. He credits his job acquisition at one of the most respected advertising agencies, Publicis Kaplan Thaler (PKT), to reaching out and connecting with people, including BGSU alumni.

“Networking is the ONLY reason I was able to land a job in New York.  A year before graduation I started reaching out to anyone I could find who might know someone in New York.  I blindly reached out to people on LinkedIn and asked BGSU marketing department professors Jeff Bryden and Mearl Sutton if they knew anyone as well.”

Miller continues, “Professor Bryden put me in contact with a BGSU alum who introduced me to my biggest mentor to date. This woman is a brand consultant in NYC for clients ranging from major corporations to start-ups. I was able to help her conduct research for a few projects, and she put me in contact with many people who work in advertising.”

The 2014 grad also got assistance from Sutton, who connected Miller with one of his former colleagues in Virginia. After an elaborate series of phone conversations with several different people, Miller was finally put in contact with an account director at Publicis Kaplan Thaler in NYC. “I would not have my job at PKT today if it weren’t for this crazy chain of connections.”

Bryden states, “Not all case histories turn out with the serendipity of Chris Miller's search. He put a lot of time and energy and personal moxie into his search. Mearl and I were merely the ‘catalysts’ in his occupational equation.”

Publicis Kaplan Thaler is part of Publicis Worldwide, a world leader in advertising with the NYC branch being the largest office in North America  contracting with high-powered clients such as P & G, Citi, AFLAC, Wendy’s, Nestle, and L’Oreal.

Miller is an assistant account executive (AAE) at PKT working on the Wendy’s account.  “As an AAE, my overarching role is to help coordinate the communication of campaign strategies between the Wendy’s marketing team (located in Dublin, OH) and the creative and production teams here at PKT. I also conduct weekly competitive analysis reports and social media listening, and assist in preparation for both internal meetings and creative reviews with the client.”

Miller adds, “Advertising is a crazy industry—very fast-paced and things are constantly happening at the last minute. However, compared to other popular industries in New York it offers a fun, more laid back culture. Gone are the ‘Mad Men’ days when everyone wore a suit and tie.”

“I’m experiencing an interesting transition from a small town in Indiana (Batesville), to a slightly larger town (Bowling Green), to one of the biggest cities in the world. I was once told ‘you can either move to New York when you’re young and poor or old and rich.’ I definitely chose the former.”

Miller credits two of his marketing professors in helping him prepare for his career. “Professor Bryden’s Intro to Promotions class and Dr. Doug Ewing’s Creativity in Marketing class were the most influential in terms of familiarizing me with the industry.  Professor Ewing’s branding project served as an inspiration for me to go forth in pursuing this field of interest. For the first time in my life, I was immersed in a project that I could not turn off in my mind. I was constantly thinking of new ideas and jotting them down so I wouldn’t forget them. I’ve told this story in just about all of my advertising interviews.”

While attending BGSU, Miller was a pitcher for the varsity men’s baseball team which captured the Mid-American Conference title in 2013.

The BGSU alum has advice for students thinking about their job opportunities. “If you identify early on that any particular field or geographic area might interest you, do an internship there and see what you think.  Also, network as much as you can, especially if you have no connections in the geographic area you wish to work.”

Miller concludes, “Don’t be afraid to use connections to help you find a job, but don’t ask them to help you get a job. Always take an approach that you are interested in pursuing that field and would like to acquire as much information about it as you can. ASK FOR ADVICE. People love to give their opinion on things. Be a good listener, and if they like you as a person, they’re going to help you out!”

“Don’t be afraid to use connections to help you find a job, but don’t ask them to help you get a job."

Bryden concurs with Miller on the importance of networking.  He explains how networking led him to his long and successful advertising career. “Happy endings like this, though, are the reward and reason behind my return to teach at BGSU. I had an ‘advertising mentor,’ Dr. Maurice Mandell, who encouraged me into what turned out to be a 30-year career in the advertising agency business. I returned to ‘pay back’ and, in my own fashion, continue to aid and abet people like Chris in the pursuit of their dreams.”

The College of Business sees the importance of networking and provides opportunities beyond the typical classroom education that puts students on a path to success by learning important professional skills.  Current BGSU students learn how to network and practice these skills through several initiatives including the Dean’s Guide to Practical Business Workshops and the Business Career Accelerator workshops. The College also has dedicated business faculty who go beyond teaching classes and serve as mentors who help students like Miller connect with BGSU alums and their industry contacts.