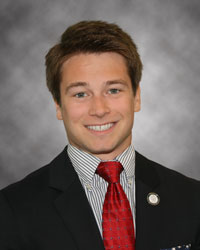 A pivotal turning point in his college career came when Trevor Bischoff ended his freshman year at BGSU. He says he had the “big realization that I wanted to make the most of my time here.”  And that he did!

Bischoff graduated in May as the College of Business’s outstanding graduating senior, being the first graduate to earn a business degree with four specializations – finance, accounting, business analytics and intelligence, and applied economics.  He accomplished this while also remaining highly active in extracurricular activities and taking on leadership roles throughout campus.

Bischoff characterizes himself as “quiet” when he arrived his freshman year.  But he attributes “coming out of his shell” as a result of getting involved in the College and throughout the University.  During his sophomore year, he was extremely busy. “If I wasn’t excited about what I was doing, I would have burned out.” Bischoff was chosen to be a peer facilitator who mentored first-year students in business classes, and he was training to become an orientation leader as well as a resident advisor for Founders residence hall. In addition, he pledged two fraternities – Delta Sigma Pi, Professional Business Fraternity, where he was elected vice president of finance upon initiation, and the Greek fraternity Kappa Sigma. “Pledging two fraternities at the same time was probably one of the most difficult challenges to overcome, but it really opened up my network at the University. It taught me to be a team player and how to support those around me.”

During his senior year, he was elected president of both fraternities. Bischoff states, “Serving in the presidential role of both organizations will forever impact me. I am grateful for the opportunities these great people gave me to lead them. My leadership skills grew exponentially in these roles.”

You would think that Bischoff already had a full plate, but he also served as a teaching assistant for weather and climate classes for two years and was a tutor at BGSU Learning Commons. According to Bischoff, “Nothing compares to the feeling when your tutees get that ‘Ah ha!’ look on their faces and find meaning in what they are working on.”

Besides the academic side, Bischoff interned two summers for Parker Hannifin as a corporate treasury intern and a corporate cost accounting intern. This fall the BGSU graduate joins Deloitte as an Enterprise Risk Services (ERS) consultant. Bischoff says, “The type of work I’ll be doing is fairly broad, but a focus will be around compliance with government and financial regulation throughout an enterprise. So, I will be meeting with clients around the nation evaluating their businesses and advising them on the current and future risk environment.”

Bischoff admits that making the most of his time at BGSU was fulfilling and being recognized with the College of Business Karl Vogt Outstanding Senior Award was a goal he set for himself. The 2014 graduate credits the culture of engagement fostered within the College of Business and the generous alumni who establish scholarships for supporting him in his college career. “If it hadn’t been for the scholarships, I would not have been able to extend my college career to achieve my academic and professional development goals. I am more prepared for the professional world because of the opportunities the College gave me.”

The 2014 graduate gives advice to current students about being successful. “First, get involved; aside from keeping up with your studies, being a part of an organization and having real world experience will probably be the biggest differentiators you can have on campus.  Second, try your hardest to complete an internship or co-op. Don’t be afraid to relocate for your internship. You will not regret it!”