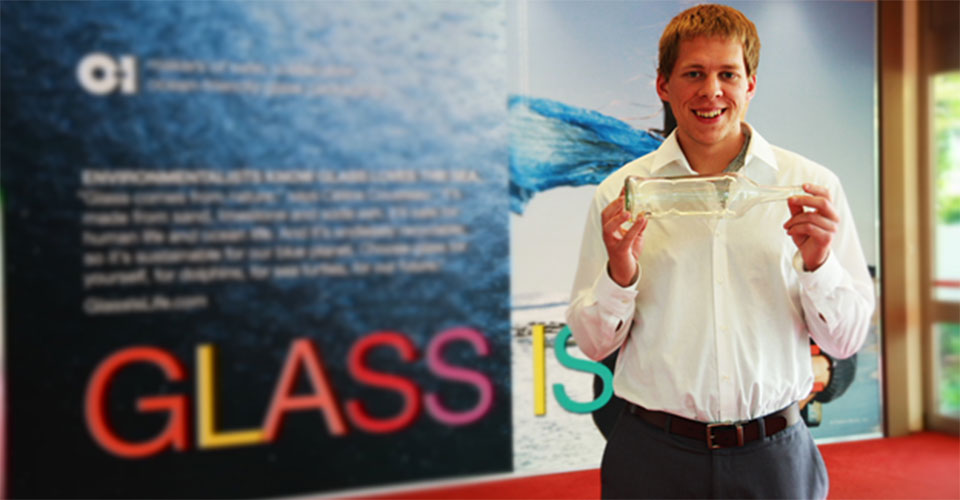 Ryan Shukis, a student in the College of Business tri-specializing in finance, marketing and international business and minoring in German, is graduating in May with a portfolio that resembles someone well established in his career, not someone just getting started.

Shukis has spent the last four years taking advantage of every available opportunity to prepare him for a successful career in the international business field. He is actively studying French and German and hopes to study Italian and Spanish in the future. Shukis wants to create added value for the company he works for. “Knowledge is power and I plan to get a lot of it,” remarks Shukis.

Shukis began his business career at the age of 15 by starting his own eBay business. He learned from a family member how to sandblast designs on wedding flutes, mugs, shot glasses and other glassware and sold these items on eBay.

While most of Shukis’ friends were learning to drive, he was gaining valuable career experience and adding the first impressive title to his resume--Founder and CEO of “Mr. Huntsburg,” the name of his eBay account.

Shukis’ father loaned him the start-up cost of $300 to purchase a sandblasting machine and he was able to pay his father back when his sales took off. Through this experience, he learned the value of customer service, shipping products on time and the financial side of running a business.

Shukis embraced his mantra, “knowledge is power,” throughout his academic career. “The College of Business offers so many opportunities for students to become engaged in the college. There are many new initiatives that are creating a buzz throughout the college and it is an exciting place to be. I became a very involved student through the many programs and events, which helped me get to know my professors,” he comments.

“There are workshops where we learn networking skills, dining etiquette, dressing for success and other valuable lessons that you don’t learn in the classroom. There is also the CBA Rewards Points program that rewards students for attending events. And, there are many events to choose from including world renowned speakers, class dinners and college events that encourage participation, experiential learning as well as plain old-fashioned fun,” adds Shukis.

Shukis also took advantage of a study abroad program through the College of Business and enrolled in the Ecole de Management Strasbourg Program at the University of Strasbourg where BGSU undergraduate students have the unique opportunity to earn a dual business degree from both BGSU and from one of the most renowned European educational institutions, Ecole de Management Strasbourg in France. Shukis also spent a summer studying abroad in Salzburg, Austria, through another BGSU study abroad program.

Shukis credits his advisor, Susan Kosakowski, as a major contributor to his success by keeping him on track with his coursework. Since Shukis is involved with three different departments within the College of Business, he has had the pleasure of taking classes from many different professors. “The staff in the college is fantastic and I was able to experience the greatness of them all. We have a tremendous group with amazing life experiences that they readily share with students to keep them motivated, focused and interested,” states Shukis.

During one of his classes with faculty member, Ed White, former CFO of Owens-Illinois, he took advantage of yet another opportunity. White offers to introduce students to his business connections to help them secure internships, co-ops and even permanent positions. This is how Shukis ended up at the European Headquarters of Owens-Illinois completing a dream internship.

White, Executive in Residence of the College of Business, recognized early on how driven Shukis is. “Ryan is very goal-oriented and he is willing to work hard and to do what is necessary to achieve his goals. He wanted an international internship and was willing to work hard for one,” comments White.  They developed a plan together and White arranged for him to meet with Robert Gachot, Vice President of Finance at O-I Europe, for lunch. Shukis took a risk and traveled to Switzerland for the meeting. The rest is history—both Shukis and Gachot hit it off and Shukis was offered the position.

Currently, Shukis lives in Lausanne, Switzerland where his apartment, near Lac Léman (Lake Geneva in English), is only a ten-minute drive from the O-I European Headquarters where he is working in the finance department as an analyst. He analyzes reports from the European operations including Germany, France, Italy and the Czech Republic. He is responsible for more than ten multinational reports produced weekly, monthly and quarterly and distributed to both the European managers as well as exclusively to senior level management. In addition to learning new languages, he is learning how to use programs such as SAP, Vendavo and Hyperion Financial Management software.

“The most enjoyable thing is learning something new every day,” comments Shukis. “Since I am studying languages, I can ask nearly anyone around me if I need help with how to say something or need a further explanation. I work with very motivated and intelligent individuals who are always there to help if I need it”

There are 19 different countries represented in his office building, which is a dream come true for an international business major. “My focus right now is on French, followed by German. I would love to study every European language at once but I don’t think my brain can handle it. Studying languages in Switzerland is perfect because it consists of so many nationalities.” said Shukis.

When asked what he does during his free time, his answer is no surprise. ”I continue learning,“ replies Shukis. “Becoming more and more of a global citizen has to be my favorite thing. I am constantly reading the Wall Street Journal and through work I am able to stay updated on what is going on in the international marketplace with such a diverse workplace and challenging environment,” adds Shukis.

White said the O-I leadership is so impressed with Shukis they are asking to see additional candidates from the College of Business for internships. White also added that Shukis did not become successful from luck. He worked hard, created goals and then used every opportunity available to him to achieve those goals.

“When students arrive in the CBA, we (advisors) dedicate ourselves to encouraging students to take advantage of every opportunity. Ryan arrived at BGSU with that plan in mind and has wrapped his arms around every opportunity here. Thus, the assets he will leave with guarantee he is well-prepared to have the future of his choice!” adds Susan Kosakowski, advisor.

While Shukis is hoping to someday be employed full-time by Owens-Illinois, one thing is for certain. Regardless of where his first full-time position leads him, Shukis is off to an impressive start.