After completing high school in three years due to the post-secondary education program, Ce’Ara Rice-Malkowski was excited to go to college and continue her love for math and budgeting. Initially she planned on going out of state to college, but she chose Bowling Green State University over several prestigious private  schools to pursue her business education because of what she found here… great personal attention and a caring support system. Rice-Malkowski graduated in May with a specialization in accounting and is the first in her family to graduate.

For Rice-Malkowski, BGSU was actually her eighth choice for a college to attend. She was accepted to schools such as Harvard, Howard, and Wellesley. Rice-Malkowski chose BGSU because of the Student Recruitment Team Ultimate BGSU Overnight. By getting to shadow a University student, she had the opportunity to sit in on a class, meet faculty and staff, learn about resources on campus, and most of all, have fun. “I was impressed that BGSU reached out and was genuinely concerned for me going to college whether it was with them or another university. This was the beginning to my college career at BGSU.”

While attending BGSU, Rice-Malkowski was involved in many organizations and programs that the campus and the College of Business offers, such as Beta Alpha Psi, Chi Alpha Epsilon National Honor Society, National Association of Black Accountants, Student Recruitment, Decreasing Discrimination and Stereotypes, and the Global Ambassadors Program, to name a few. Rice-Malkowski is a scholar for the Ronald E. McNair Undergraduate Research Program and a mentor to five first year women for the SMART Mentoring Program. She also studied abroad at Hong Kong Baptist University in the spring of 2013. Due to colleague Ashley Benton’s recommendation, Rice-Malkowski received a position in the BGSU Bursar’s Office. After working there for two years, her immediate supervisor recommended her to work in the Controller’s Office and has been there for seven months.

Being a first-generation college student, Rice-Malkowski heavily depended on faculty and staff to help her on the college journey. BGSU is now considered home and a support system that assists her with accomplishing her goals. “Its programs like TRIO that has such caring staff members ready to go above and beyond to help students that make BGSU attractive to underrepresented students.” Ms. Ana Brown, director and coordinator of Diversity in Residence Life, was one of the first staff members to help her feel comfortable and find her place at BGSU. Because of Ms. Ana Brown, she found a lot of great resources for mentoring and working for residence life for two summers.

“The College of Business is the village that has raised me on my journey throughout college. The College had everything I needed - a writing lab, the Business Career Accelerator, and great advisors there to help you. Dr. Tim Chambers, my academic advisor, is one of the closest people to me in the College of Business. When I was stressed out about a class, study abroad or anything pertaining to school, I was able to look for support and kindness.” Another great aspect that Rice-Malkowski likes about the CBA is how approachable Dean Ray Braun is. She was excited to hear about his plans for the College and knows that he truly listens to the students’ opinions and has a genuine concern for the College.

With all of these impactful experiences on the BGSU campus and in the College of Business, it is hard to think something could top those, but something did.  Rice-Malkowski’s most memorable experience was studying abroad in Hong Kong. “Before my study abroad experience, I had never had the courage to get on a plane, yet alone to leave my state. I was on a 15-hour flight to Hong Kong in the spring of 2013. I was in a city that was 10 times the size of New York with 10 times the amount of people. I am afraid of heights, I do not do well in crowds, and this is the first time in life where I was on my own without my sister (also a student at BGSU).” 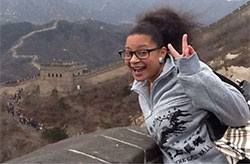 Rice-Malkowski continues, “I love to challenge myself and this would be my toughest challenge of my life thus far and one of the best ones as well. Study abroad was a growing experience. I learned a lot about myself and the person I want to be. One of my best friends to this day was my roommate in Hong Kong and now preparing to go to Strasbourg, France for a year. I built long-lasting relationships and have a better view on my global lens.”

Even through the challenges Rice-Malkowski had one of the best experiences while in Hong Kong because of the new culture she was living in. While there she took four business classes which provided her the chance to meet and work with students that led to international connections. Also, the students were able to see the big Buddha and the Great Wall of China, and try several different countries’ food.

Rice-Malkowski is proud to be entering the Master of Accountancy (MAcc) program at Bowling Green State University in August. When starting her career at BGSU, her goal was to be a Certified Public Accountant (CPA), and she is still on that path as of today but her education will not be ending there. Due to the McNair Program and mentors like Dr. Ken Snead, Rice-Malkowski plans to pursue a PhD in accounting after gaining years of experience in the field. Not only does Rice-Malkowski have great plans for her education and career, but she is engaged to her high school and college sweetheart of 7 years and will be marrying him on June 23, 2015.