This year’s theme for the Sebo Series in Entrepreneurship was “Entrepreneurial Journeys: Stories of Success” which featured “Shark Tank” investor Daymond John as the keynote speaker and three highly successful BGSU alumni as featured speakers. More than 1,400 people gathered in the Bowen-Thompson Student Union to hear their stories of how they got started. 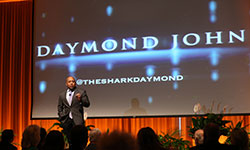 “Shark Tank” investor Daymond John is the founder of the FUBU clothing line, as well as a renowned branding expert and author.  He gave a high energy presentation about his start in Queens, New York, with a passion to be a part of the hip-hop music industry.  John admitted that he lacked musical talent, so he focused on the clothing that hip-hop artists and their fans were wearing, and launched his business out of his mother’s basement, making FUBU an icon in the fashion industry. He had well-known hip-hop artists like LL Cool J and RUN DMC wear his designer clothes and used their photos in advertising. 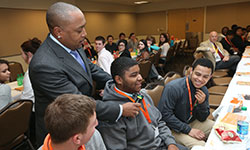 John gave the audience tips about being a successful entrepreneur using the acronym "SHARK"- Set a goal to be successful; do your Homework on your product and your competitors; Amour – love what you do and what you do best; Remember your brand; and Keep swimming.

During the Sebo Series, the “Shark Tank” investor visited with 500 students from 20 high schools who were watching the event through large screens in the Bowen-Thompson Student Union. 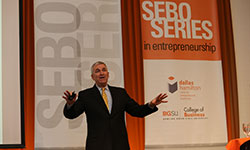 In addition to the Daymond John, three world-class innovators told their individual stories of success during the event.  Paul Hooker '75 is the owner and former CEO of SFERRA Fine Linens and a 2012 Dallas-Hamilton Entrepreneurial Hall of Fame inductee. This business innovator told his story of how he grew the luxury linen business into the global leader of today, but he also balanced this with a focus on helping children with disabilities through a variety of programs, including a non-profit organization called Challenged Youth Sports. Hooker also described being a high school baseball coach, taking the team from a winless record to the state championship using an entrepreneurial attitude. 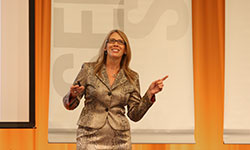 Lori Steele-Contorer '86 is one of the world’s innovators in modernizing election systems through the company she founded Everyone Counts. Steele-Contorer described her passion for improving voting systems in countries around the world and providing voter access to those with physical disabilities.  She began with little knowledge of the technology and on starting a business but knew she wanted to ensure everyone was able to vote. Her company’s efforts have been implemented in 165 countries.  Steele-Contorer was inducted into the BGSU Dallas-Hamilton Hall of Fame during this year’s E-Week celebration. 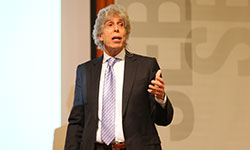 Tom Embrescia '68 spent most of his 40-year broadcasting career owning and managing over 50 radio and television properties around the country.  He is chairman of Second Generation Ltd. that invests in many diverse businesses such as marketing, manufacturing, bio medical, and the internet, including the top level domain .jobs.  Embrescia took the audience through a series of videos and narratives describing his journey to success from the Cleveland area from buying and selling media companies across the nation, partnering with sports club owners, such as Nick Mileti, to his most current domain venture. Embrescia was inducted into the Dallas-Hamilton Hall of Fame in 2011.

Concurrent break-out sessions during the Sebo event allowed the three BGSU alumni to hold question and answer sessions with attendees.

The Sebo Series in Entrepreneurship is co-hosted by the College of Business and the Dallas-Hamilton Center for Entrepreneurial Leadership with primary sponsorship from J. Robert Sebo ’58, ’13 (Hon.). This is the 11th year for the Sebo Series and it continues to set records for attendance.