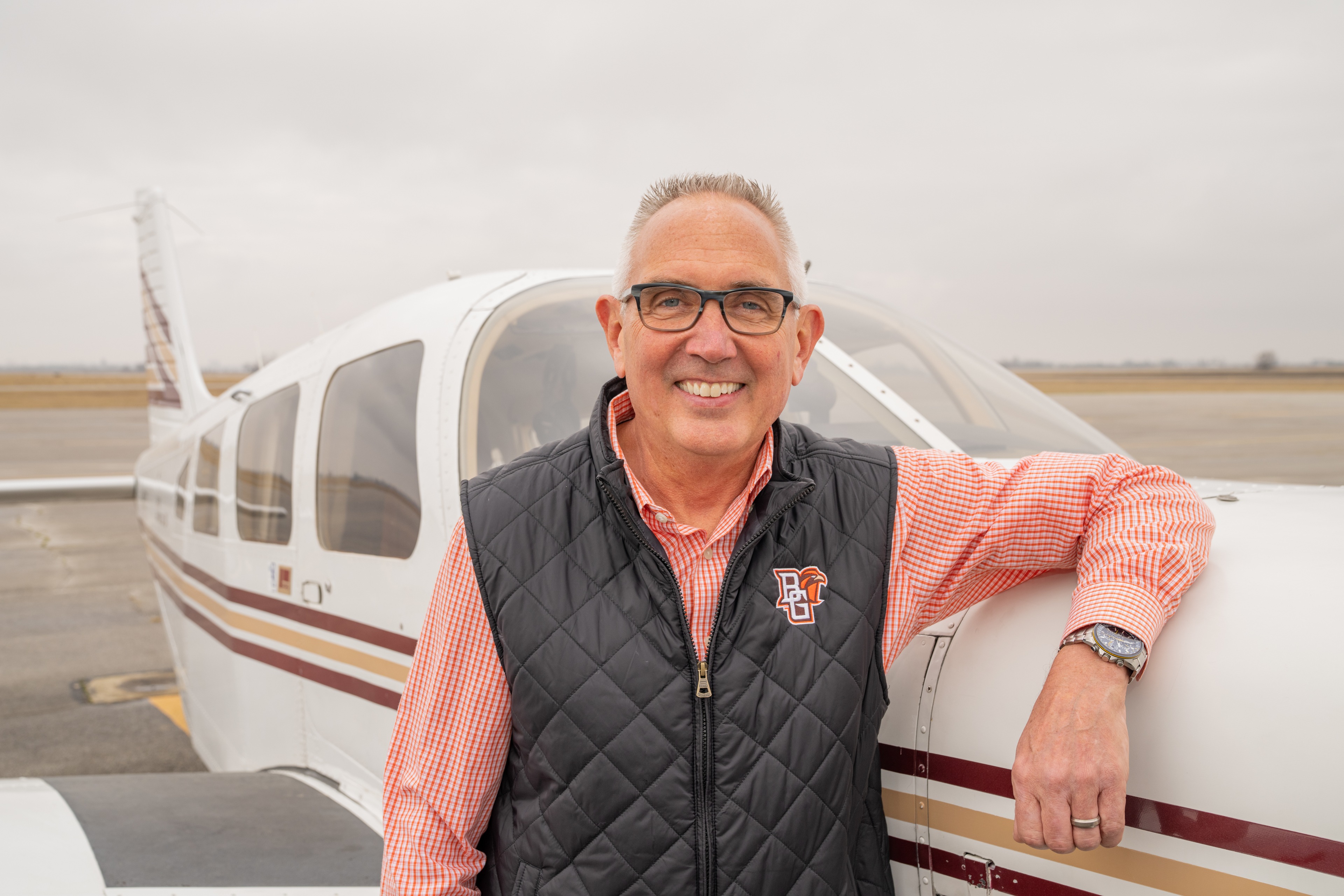 BGSU alumnus Barry Behnfeldt '83 is attempting to set a world record for the fastest journey by plane across the U.S. with fellow Falcon Aaron Wilson '04.

48 states in 48 hours: BGSU alumni attempting to set a world record for the fastest journey by plane across the U.S.

Two Bowling Green State University alumni with more than 70 years of combined military and commercial flying experience are piloting the flight of a lifetime this summer as they attempt to set a world record for the fastest journey by plane through all 48 contiguous United States.

Barry Behnfeldt ‘83 and his co-pilot Aaron Wilson ‘04 hope to accomplish the feat in fewer than 48 hours and are fittingly calling their journey 48N48.

In addition to setting a world record, Behnfeldt and Wilson want their world-record attempt to help inspire the next generation of pilots as the U.S. continues to grapple with shortages in the aviation industry.

As home to the largest aviation program in Ohio, BGSU is committed to meeting workforce demands in the aviation industry through partnerships, expanded facilities and modernization of its fleet. The University also recently approved the creation of a School of Aviation in the College of Technology, Architecture and Applied Engineering (CTAAE).

“Maybe someone out there will see what we’re doing and it’ll spark their interest in becoming a pilot,” said Behnfeldt, a captain with Delta Air Lines and retired U.S. Navy captain. "Even better, maybe it'll encourage them to consider the aviation program at BGSU."

Behnfeldt and Wilson estimate their world-record-setting, 5,008-mile journey across the country will take roughly 39 hours and 57 minutes to complete, barring any unforeseen mechanical issues or inclement weather conditions.

Their calculation accounts for 10-minute stops at each airport, where they must get signatures to certify their presence as required by Guinness World Records and five fuel stops they expect will take about 20 minutes each.

“I had never thought about setting a world record until a conversation with another pilot piqued my interest,” Behnfeldt said. “I immediately got on my flight planning application and started planning this thing out and connecting the dots across the country. Within a day, I knew it was possible.”

Behnfeldt reached out to Wilson, a fellow veteran and Delta Air Lines pilot, to gauge his interest in joining him on the world-record attempt.

Wilson said Behnfeldt didn’t elaborate on why he wanted to meet but came prepared with a presentation and a well-thought-out plan of how they would accomplish the goal.

“He had all the logistics and everything figured out,” Wilson said. “Flying across the country in a small airplane is something I’ve always wanted to do, so I was immediately sold on the idea. I didn’t have any hesitation about saying yes.”

Behnfeldt and Wilson were both exposed to aviation at a young age and said it significantly inspired their careers.

Behnfeldt, whose father instilled in him a love of airplanes, started flying lessons at the Henry County Airport in Napoleon, Ohio, at 16 years old.

Behnfeldt graduated from BGSU with a bachelor’s degree in aerotechnology, similar to the current Flight Technology and Operations program, and spent nearly 30 years in the U.S. Navy and Navy Reserves.

Wilson grew up in Put-in-Bay and began flying lessons at 14 as a way to get off the island in the winter when Lake Erie froze. His interest in aviation continued when he enrolled at the University, where he joined the Air Force ROTC program.

Wilson was commissioned in the U.S. Air Force after graduating and is a lieutenant colonel in the Air Force Reserves.

“I think one of the most common pathways to a career in aviation is exposure,” said Wilson, who now lives in Whitehouse, Ohio.

The pair and their on-board mechanic plan to depart on their cross-country journey at 11:20 p.m. on June 4 from Andrews University Airpark in Berrien Springs, Michigan, in Behnfeldt’s 1980 Piper Saratoga six-seat airplane. 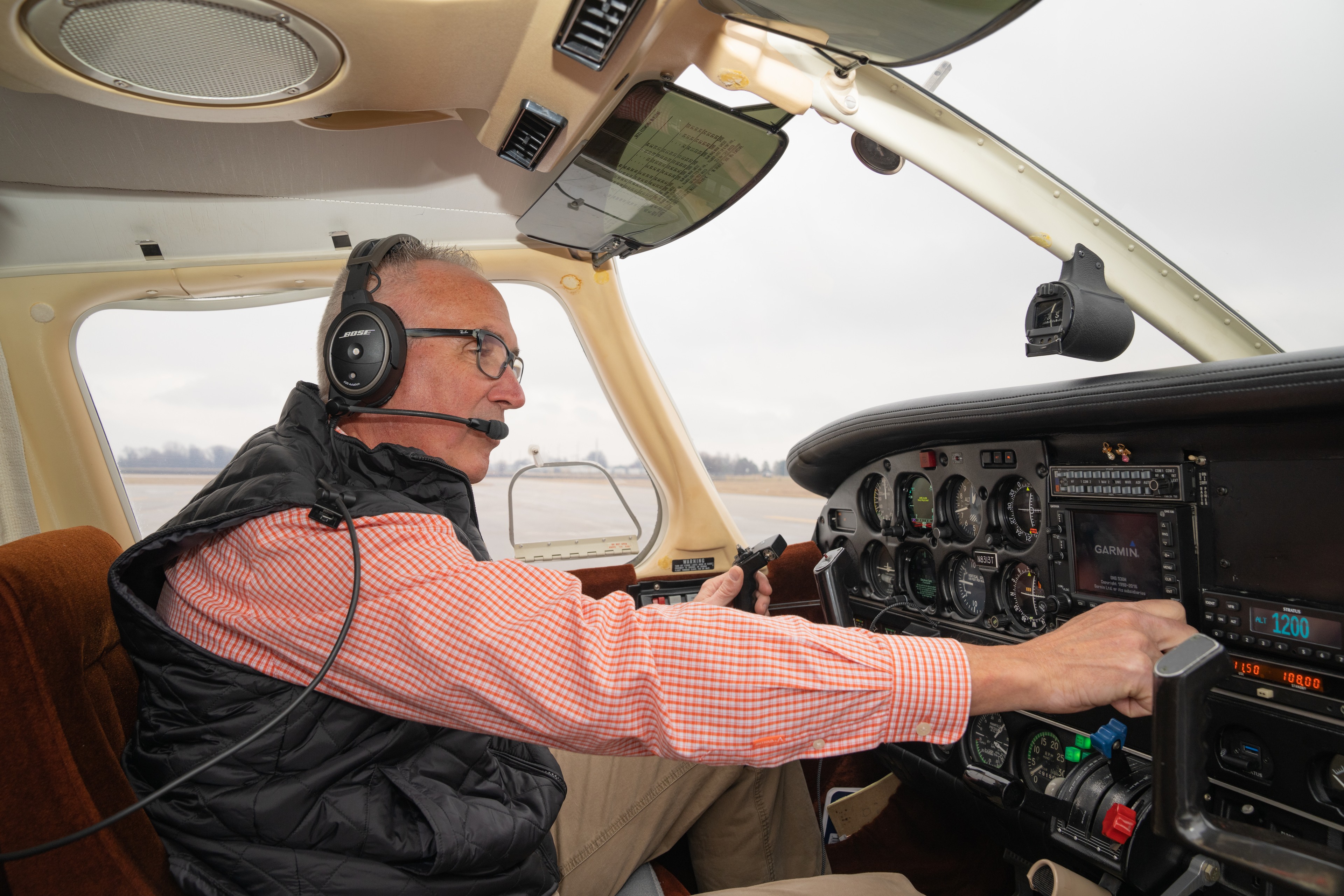 Barry Behnfeldt '83 sits inside his 1980 Piper Saratoga six-seat airplane that he's flying across the country on a world-record-setting attempt in June.

Behnfeldt said they’re taking off at night and heading west to fly over the mountains in the western U.S. in the daylight. If all goes according to plan, the crew will travel through Texas and Oklahoma and into flatter territory as the sun sets on June 5.

They’ll continue their journey through the southern U.S. and along the East Coast, arriving at the Sanford Seacoast Regional Airport in Sanford, Maine, at 3:07 p.m. on June 6.

Behnfeldt said the flight from Maine to northwest Ohio will include spelling out 48N48 over the Huffman Prairie Flying Field on the Wright-Patterson Air Force Base to commemorate a momentous occasion in aviation history - 120 years since the Wright brothers’ first successful flight in Kitty Hawk, North Carolina.

The entire flight will be viewable in perpetuity in FlightAware, the world’s largest flight-tracking platform.

“One of the most exciting things about this has been the support we’ve received from friends, family and our communities,” Behnfeldt said. “I like seeing the excitement around this. Henry County, Ohio, may be a small, rural community, but it’s a cool place. We could put it on the map with a Guinness World Record.”