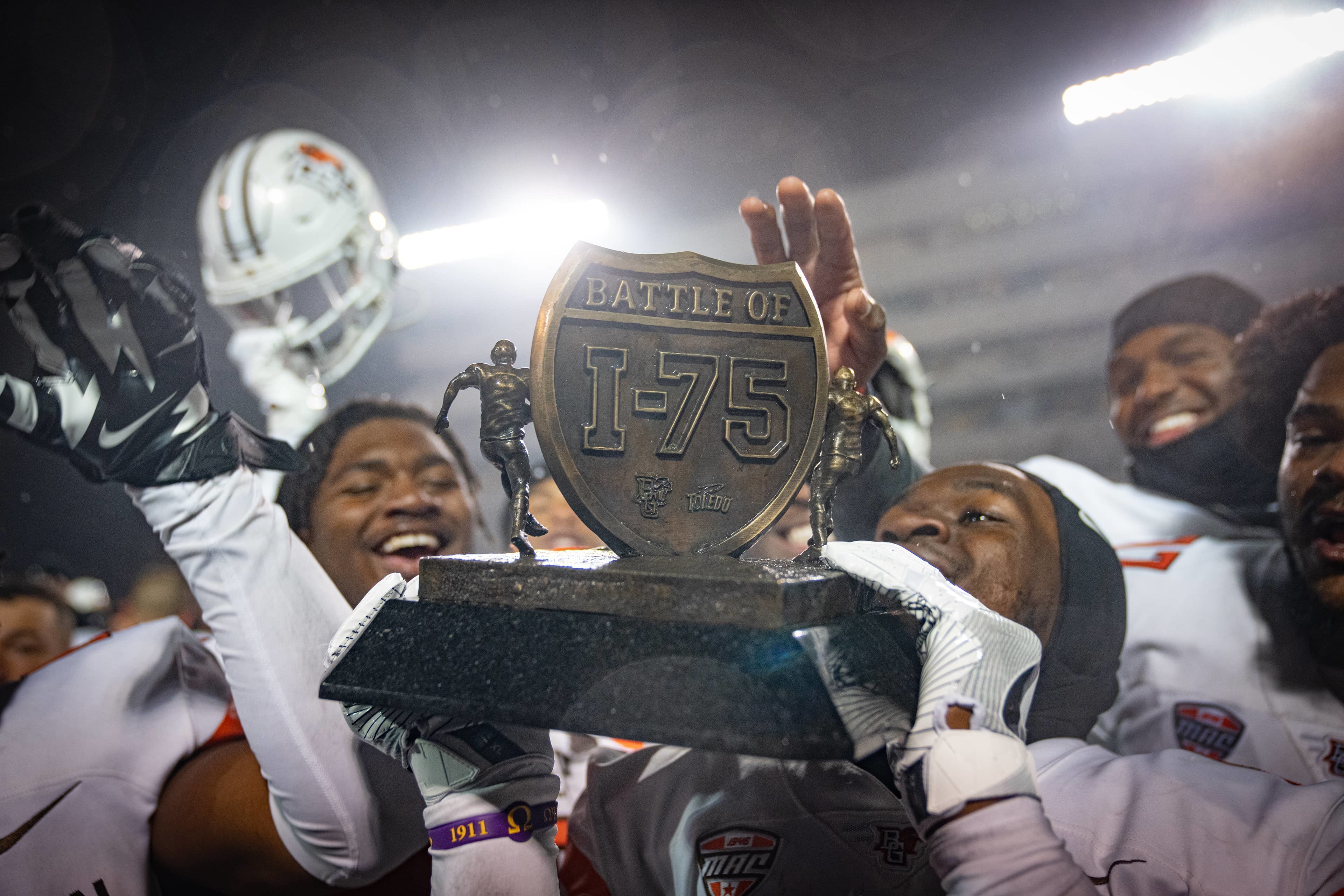 Falcon players hoist the Battle of I-75 trophy after beating the Rockets 42-35 at the Glass Bowl.

BGSU shatters any doubts in the Glass Bowl, topping the Rockets 42-35 in a backyard brawl for the ages

Say it with us, Falcons: Shock. The. World. The annual backyard brawl that pits the BGSU Falcons against the rival-down-the-road Toledo Rockets saw the good guys travel north to a snowy Glass Bowl on Tuesday night.

The temperatures stayed chilly but the atmosphere was orange-hot as the Scot Loeffler-led Falcon football team engineered a commanding first half, heartbreakingly lost the lead in the fourth quarter, then thrilled the BGSU faithful with a game-clinching touchdown that left just nine seconds on the clock.

University photographers Justin Camuso-Stall '14 and Haven Conn '22 traveled to enemy territory to document the drama of one of the all-time great games in the Battle of I-75. 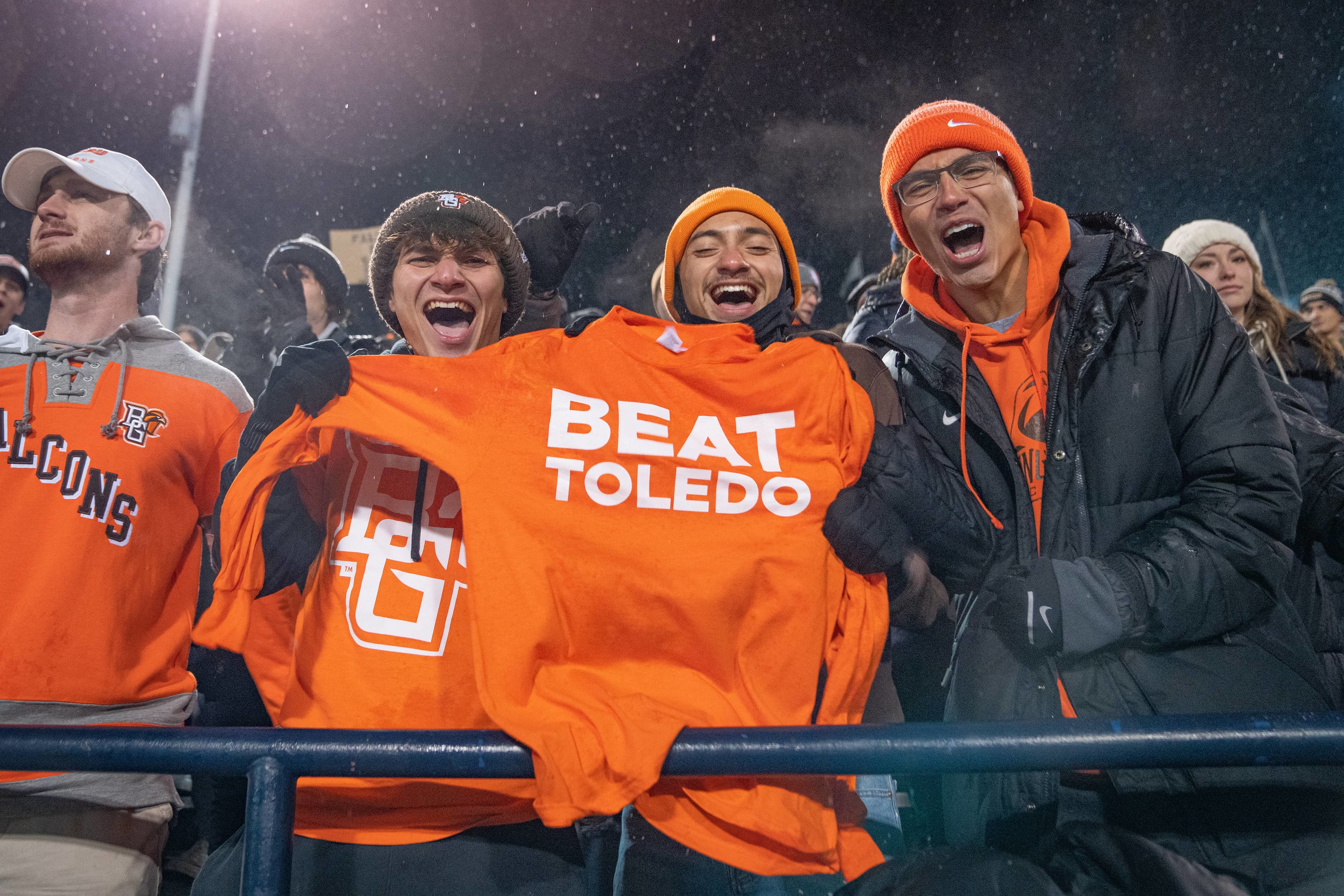 BGSU fans paint the Glass Bowl orange during the Battle of I-75. 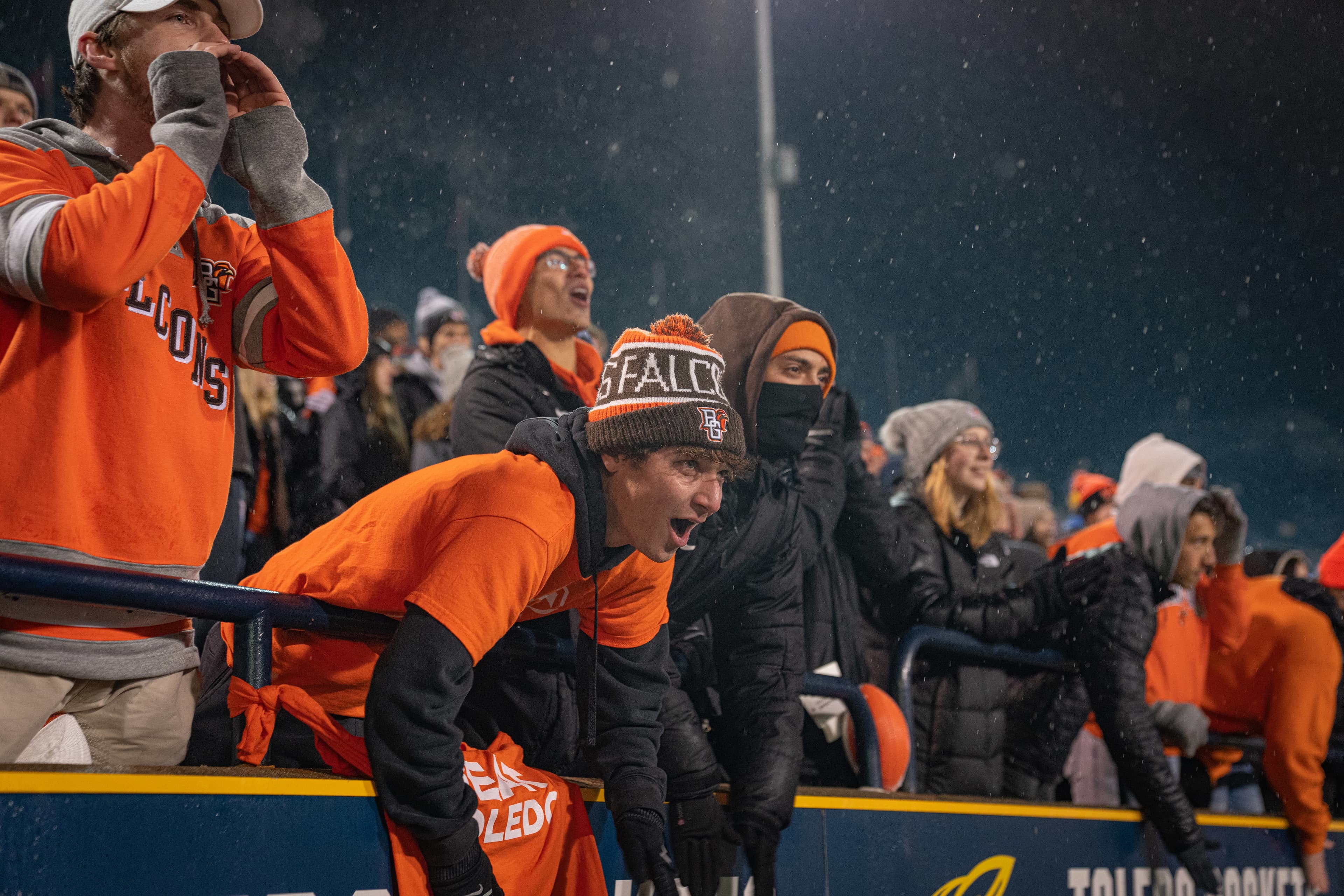 Falcon fans get loud in the Glass Bowl. 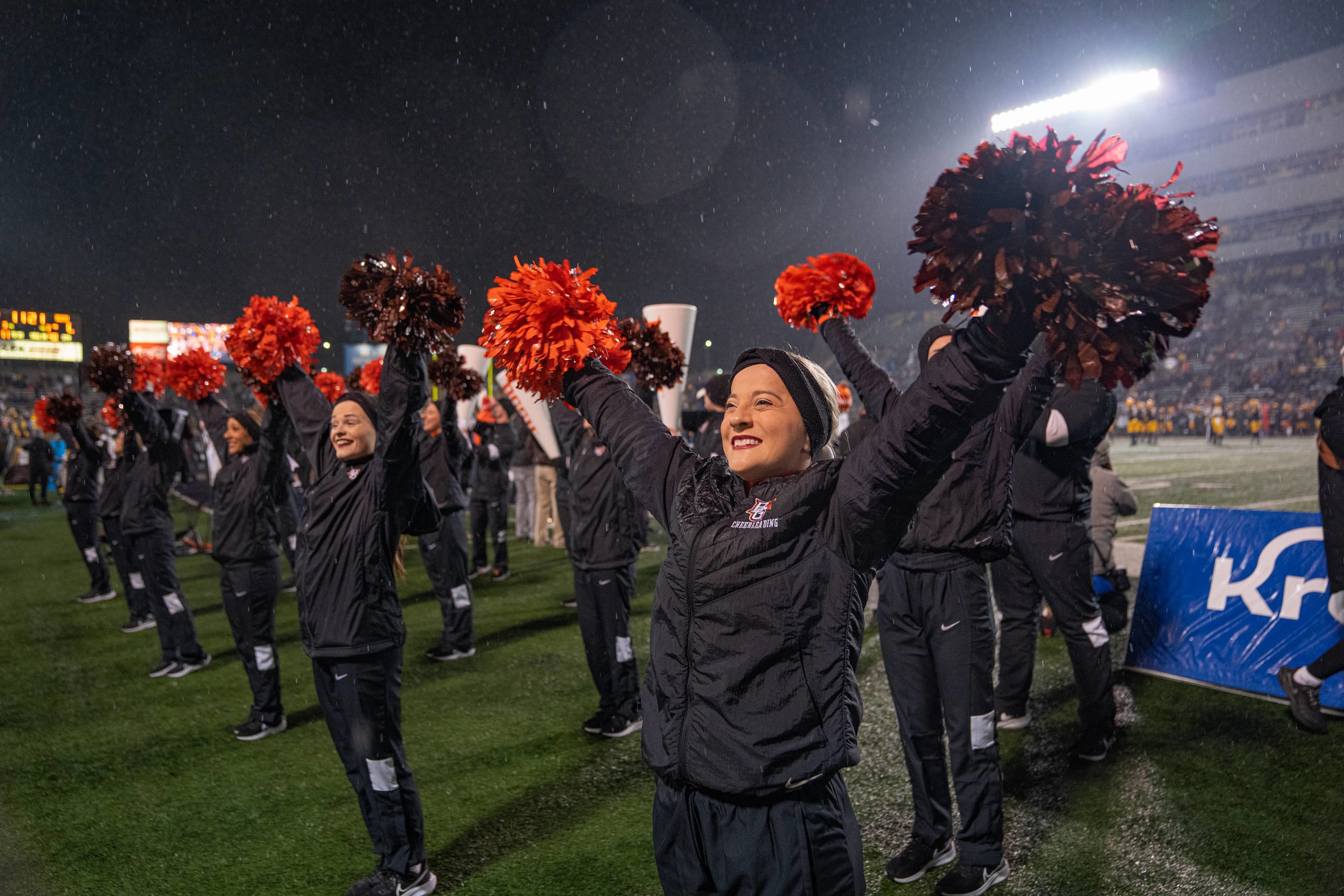 Falcon cheerleaders pump up the crowd in Toledo.

The Falcons led for nearly the entire game, taking a 21-0 lead into the second quarter with the half ending at 21-14 after UT gained some late rhythm. But the game reached nail-biter territory in the fourth quarter when the Rockets drove 85 yards for the go-ahead score with just 51 seconds left.

The Falcons' comeback started on the ensuing drive with senior quarterback Matt McDonald completing a pair of passes on third-and-long plays. First, he hit senior tight end Christian Sims to give the Falcons the ball at the UT 42.

Several plays later, McDonald – who threw for a career-high 395 yards – scrambled to his right and hit running back Ta'ron Keith with a short pass at the UT 35 yard line. The sophomore running back eluded three Rocket tackle attempts and crossed the goal line with nine seconds left in the game.

Tuesday's game was the first time BGSU won in Toledo since 2008. The 87-game rivalry series - which dates back to Oct. 3, 1919 - now narrowly remains in Toledo's win column, with 42 wins to the Falcons' 41 along with four ties. 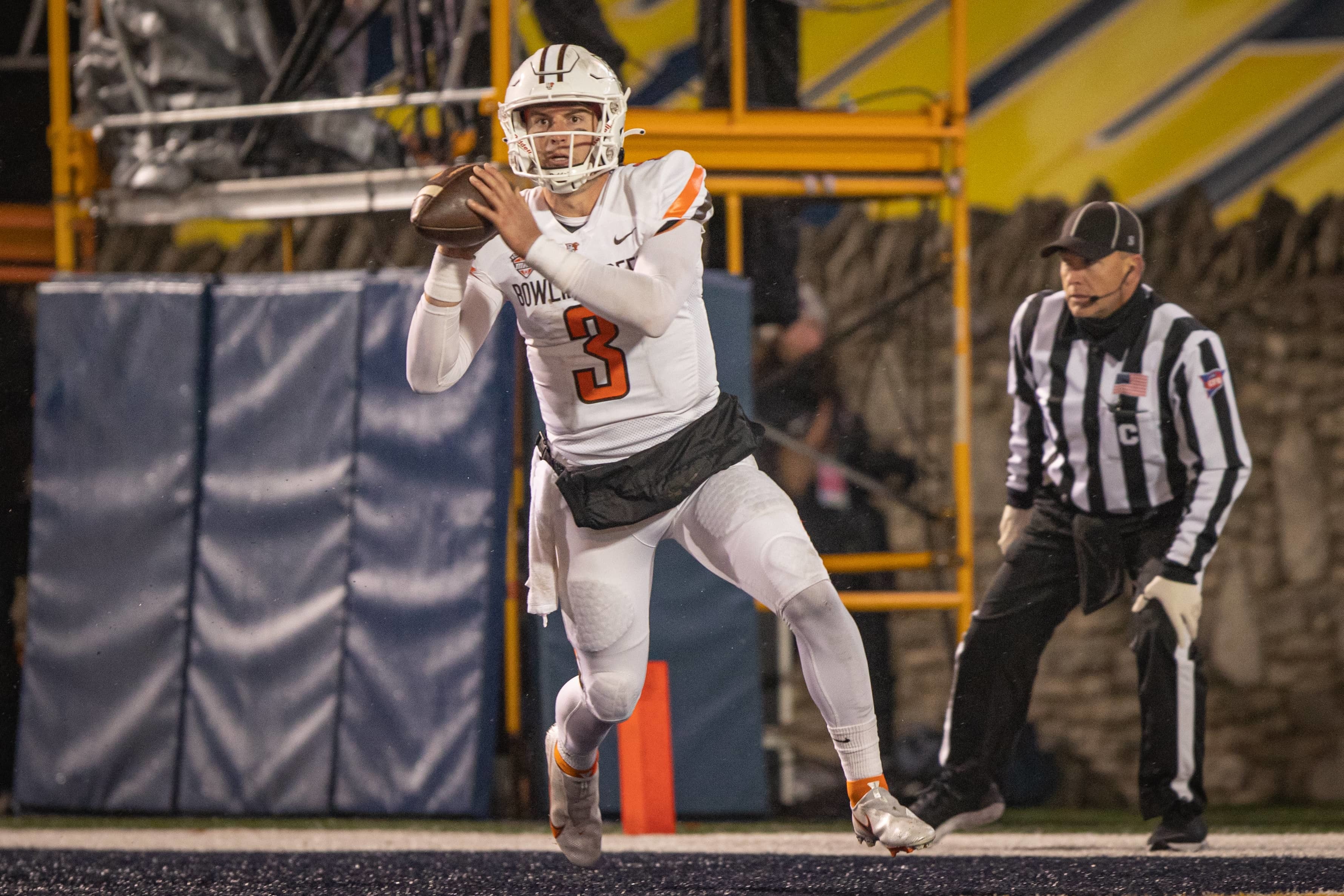 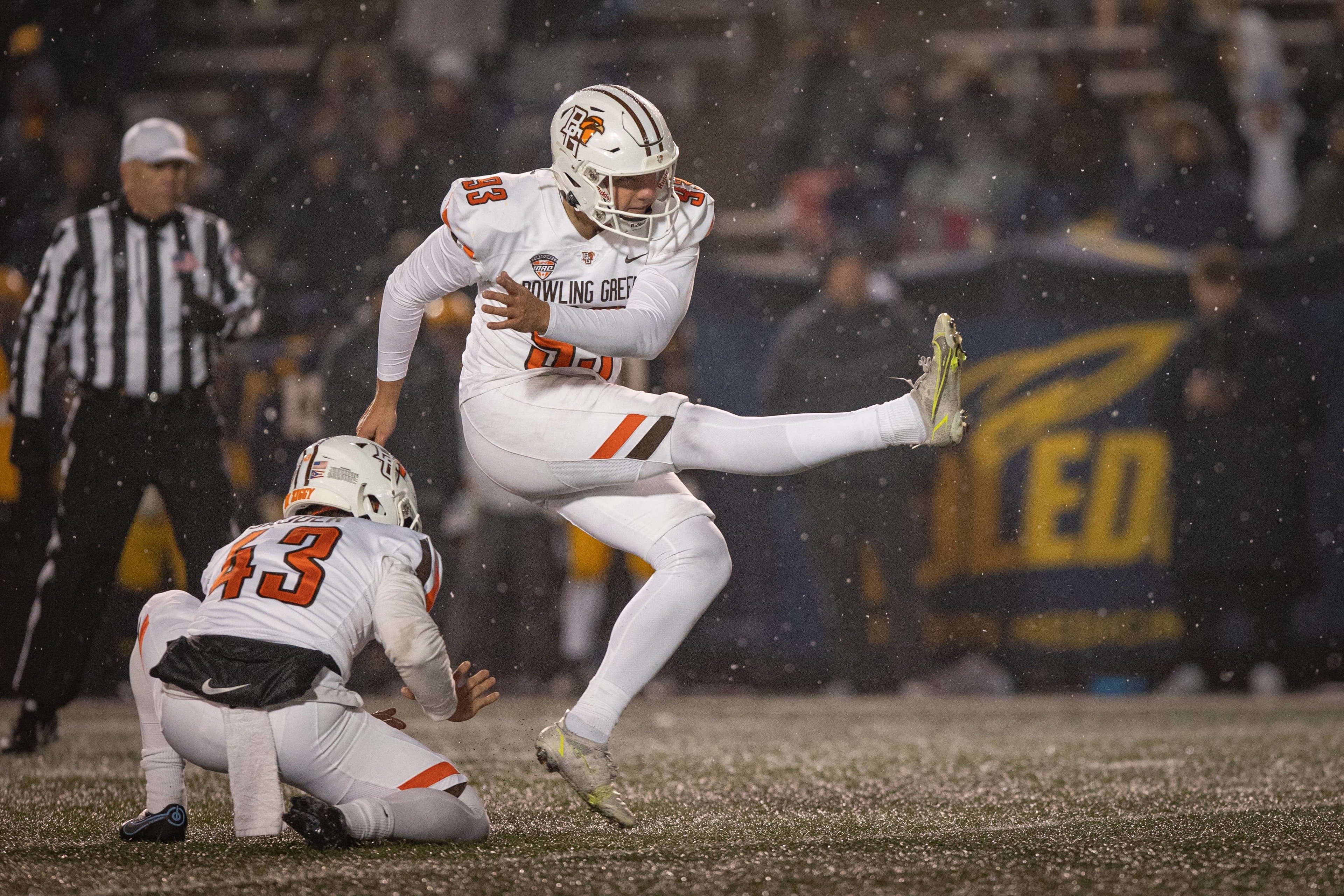 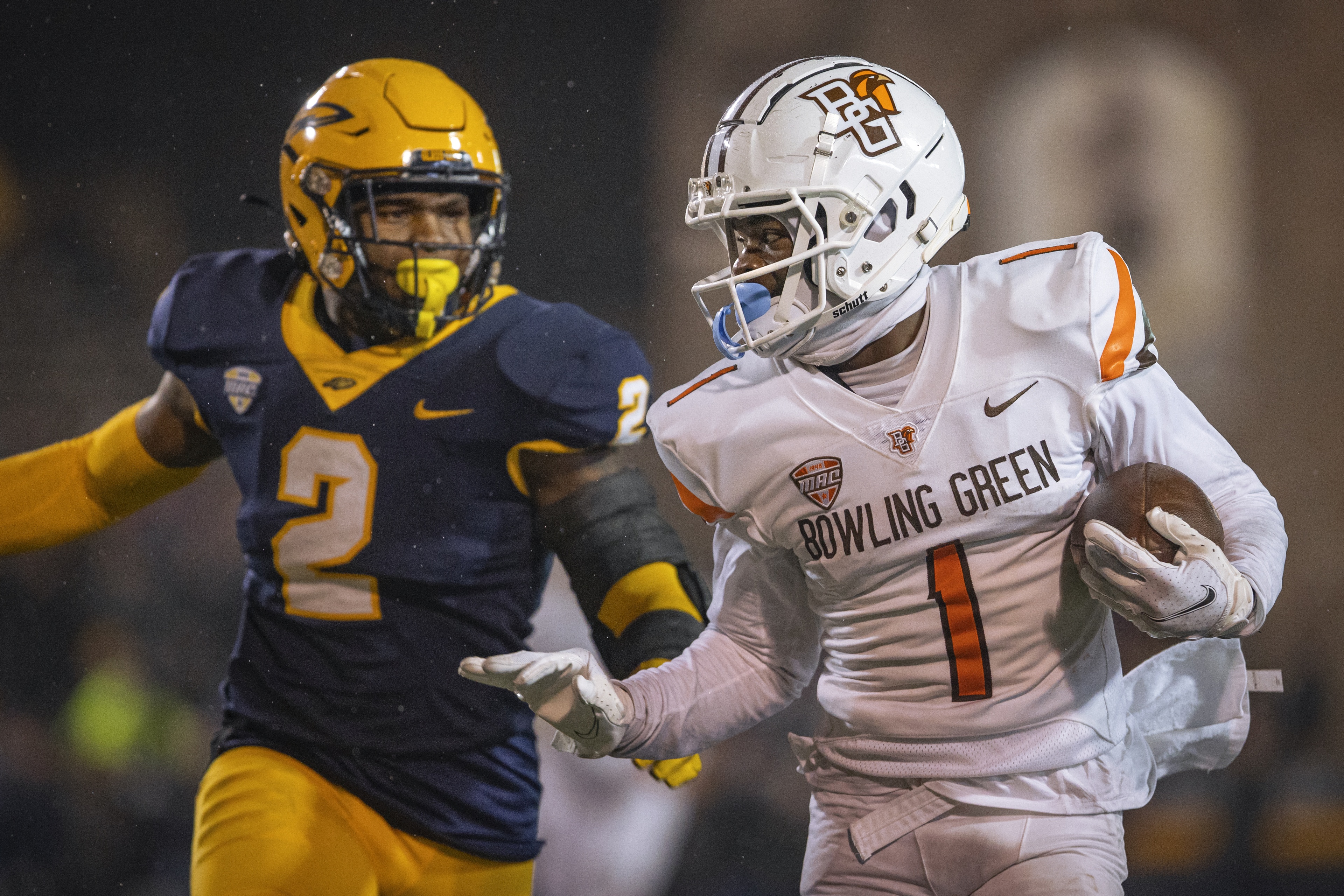 While this edition of the Battle of I-75 was an instant classic, there is a chance of a rivalry rematch between the Falcons and the Rockets later this season. Toledo has secured the MAC West title, and if BGSU wins its regular-season finale, the Falcons could meet the Rockets in the MAC Championship game in Detroit on Dec. 3.

The Falcons return to the road for the final game of the regular season, heading to Athens to face Ohio University on Nov. 22. That contest is scheduled to begin at 7 p.m. 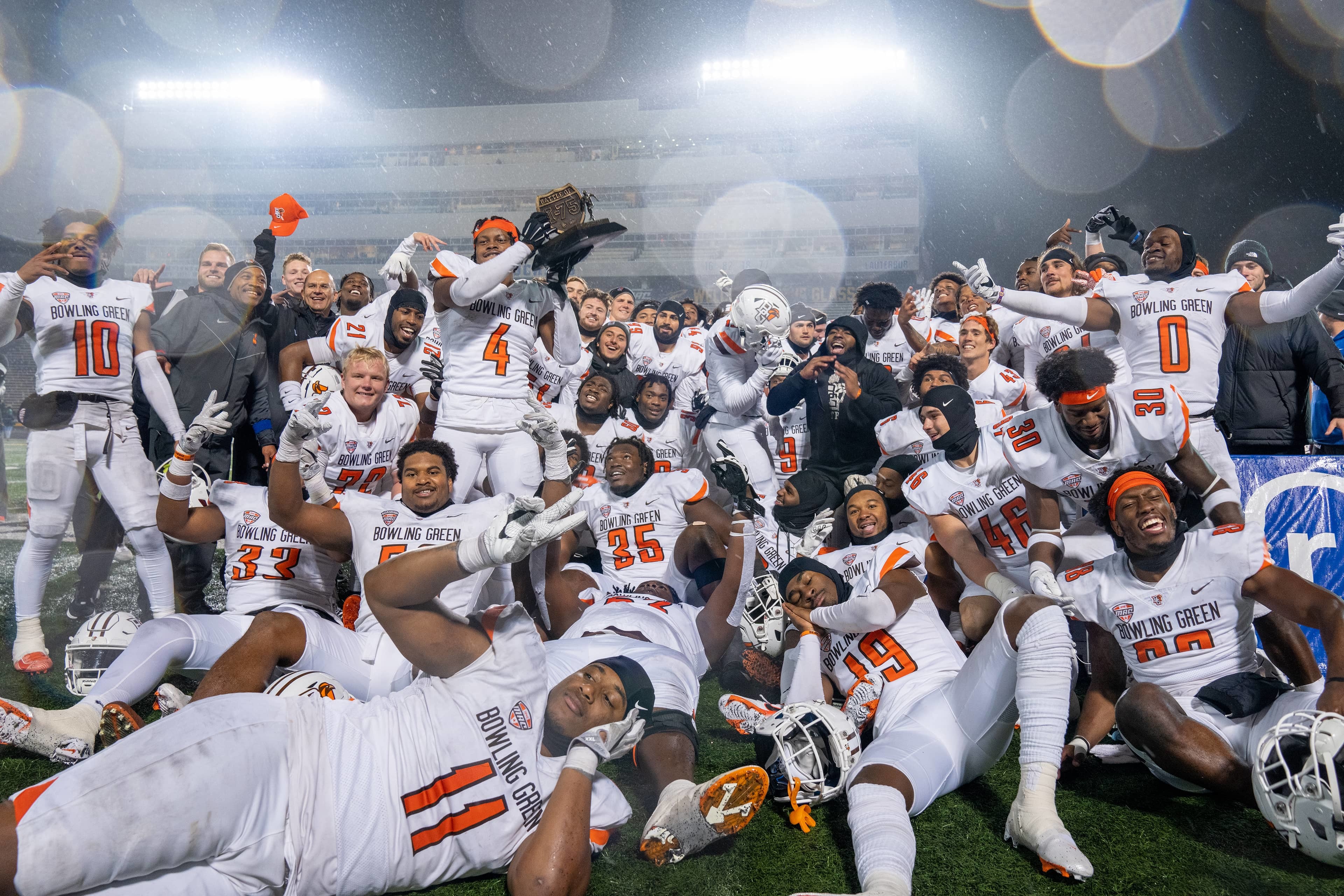 The Falcons pose with the Battle of I-75 trophy, which returns to Bowling Green. 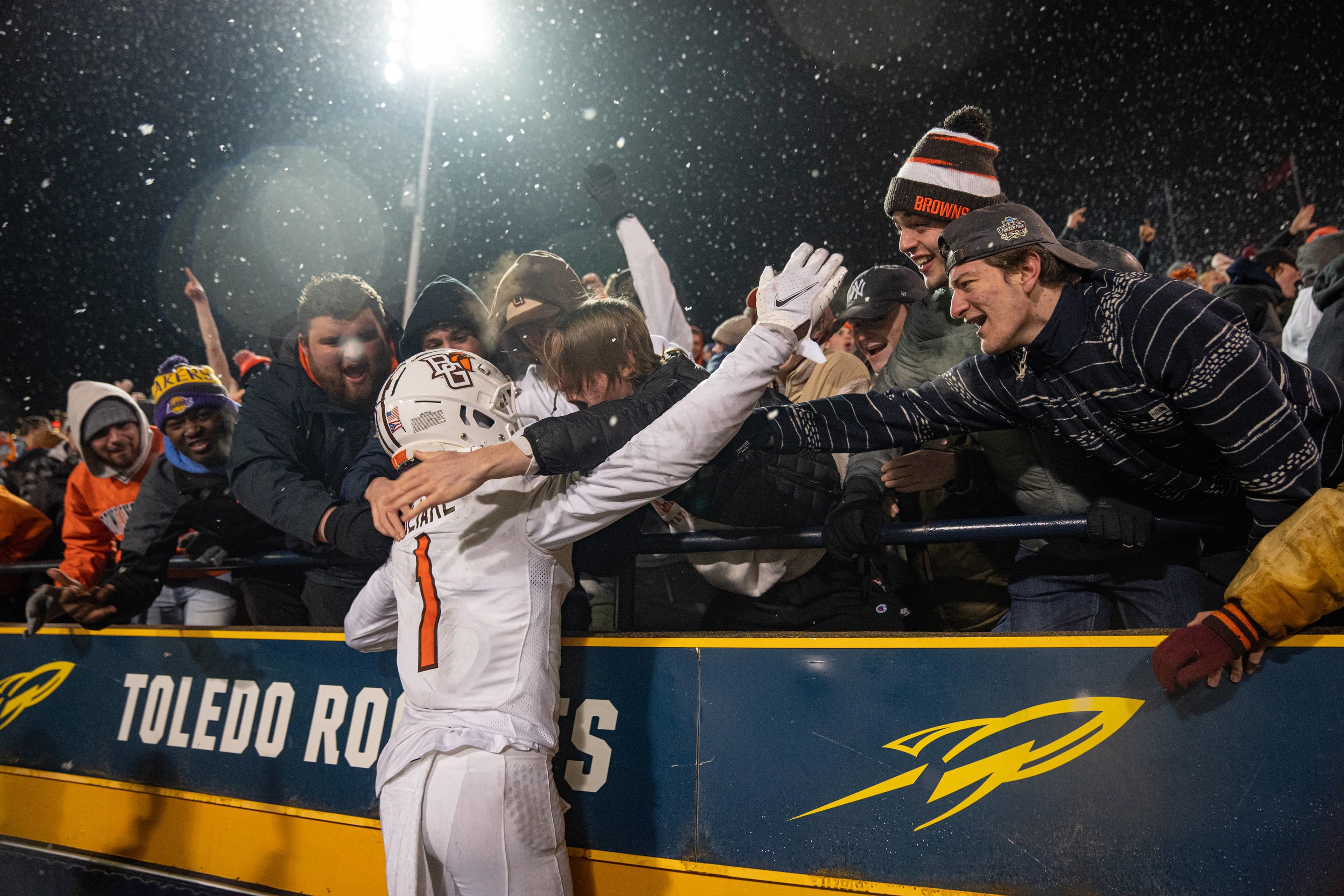 BGSU fans greet Odieu Hilaire after one of his two touchdowns on the night. 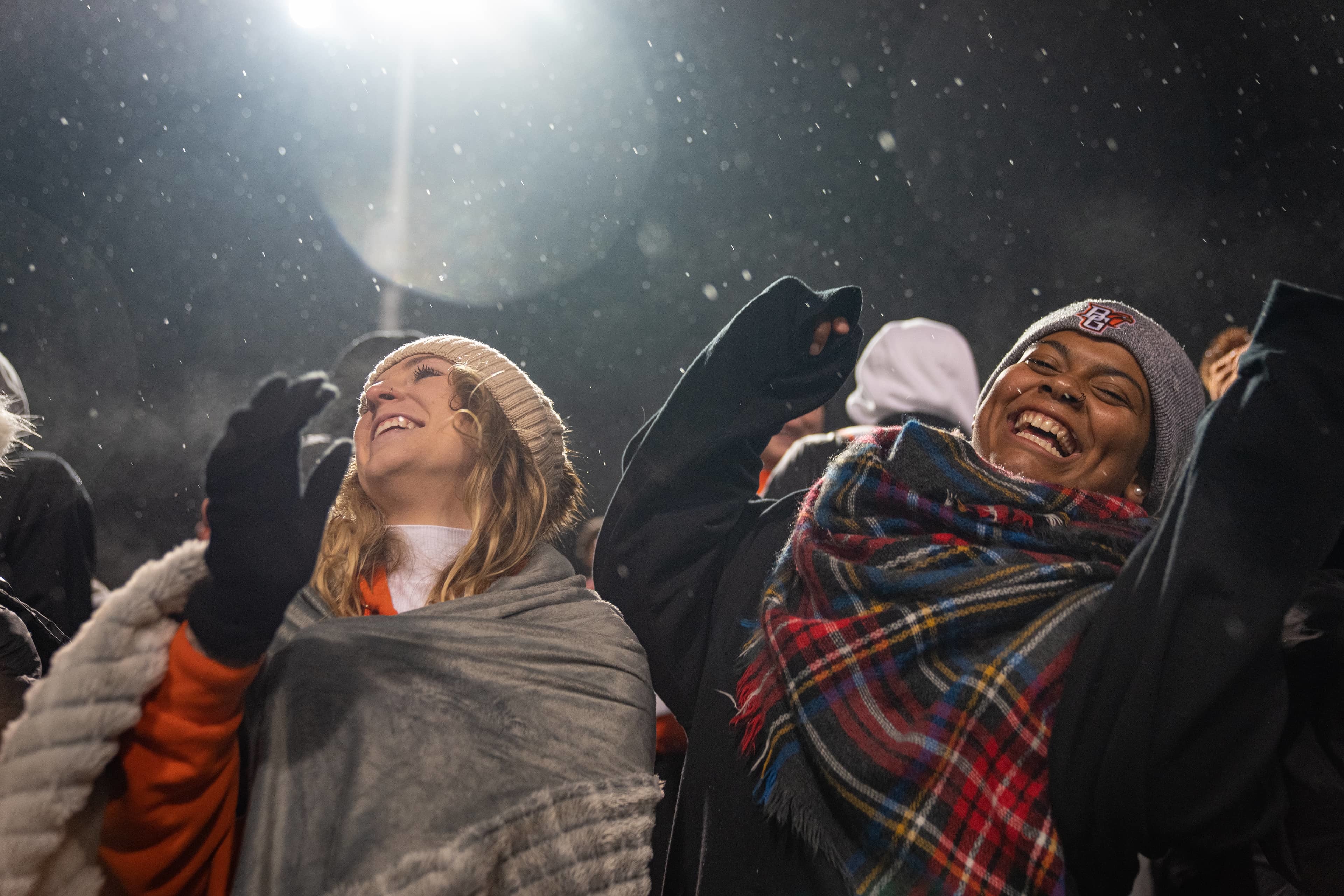 Bundled-up fans cheer on a snowy Falcon victory in Toledo. 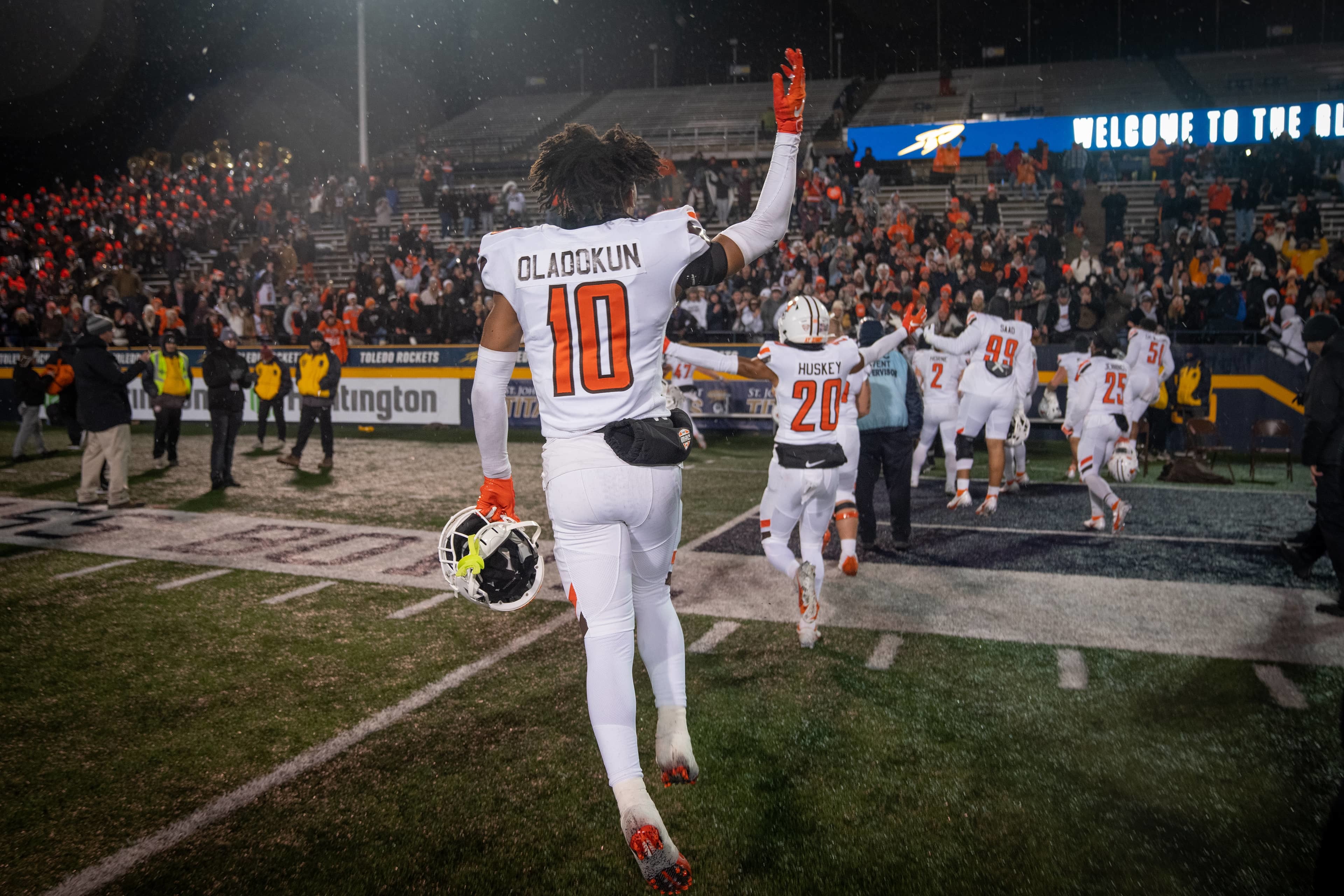 Sophomore cornerback Jordan Oladokun celebrates the win over the Rockets.