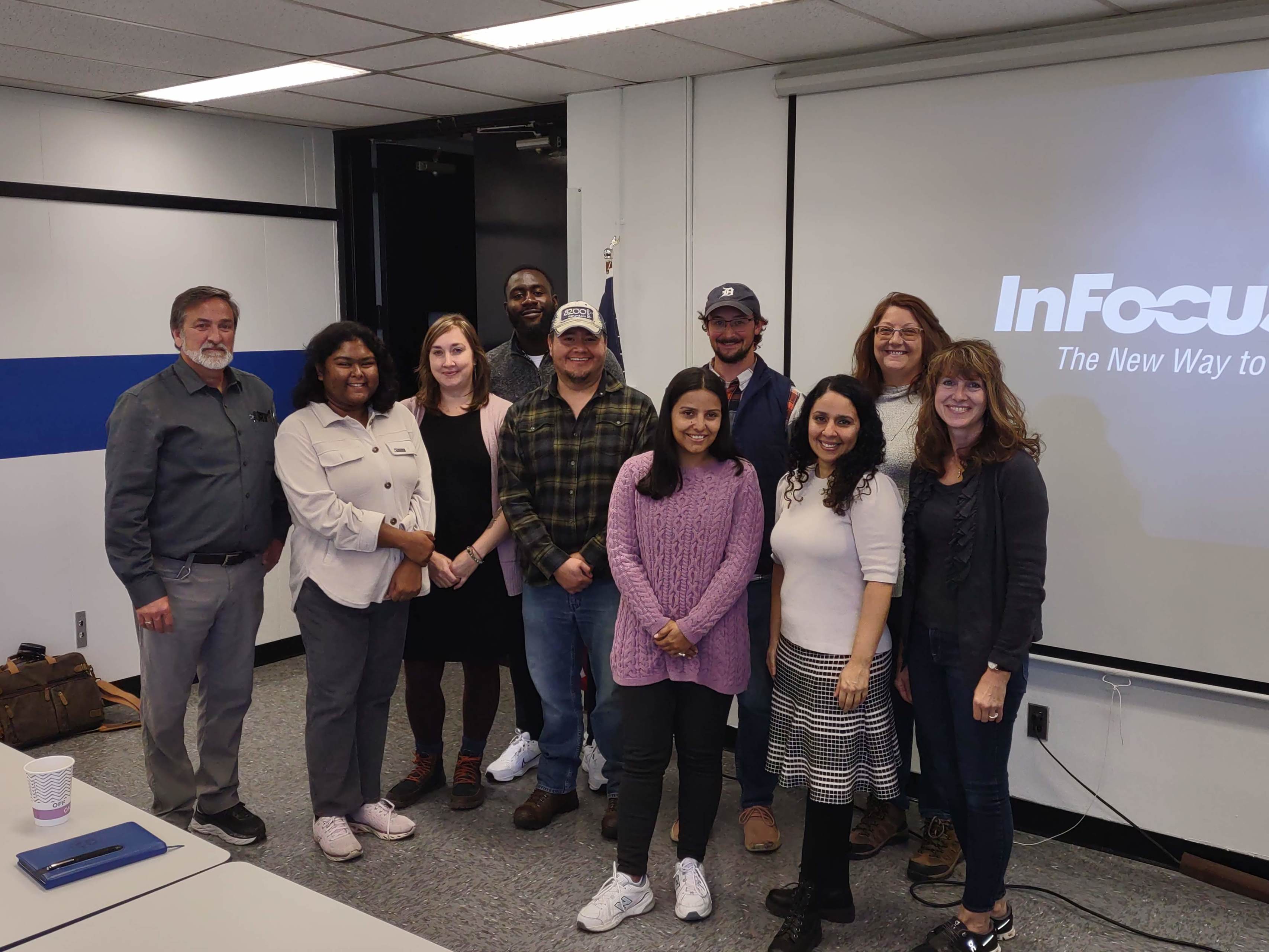 Dr. Angelica Vazquez-Ortega is exploring the use of lake dredged sediment in farming, which could limit runoff that has fueled harmful algal blooms

Research into harmful algal blooms (HABs) in Lake Erie previously has determined the chief culprit is too many nutrients in the watershed due to agricultural runoff, yet the process of preventing HABs is riddled with complexities.

The watershed of the Maumee River, which empties into the Western Lake Erie Basin, is about 85% surrounded by farmland. Farms must use some form of fertilizer to be profitable, and rainfall events will inevitably wash away a portion of fertilizer that ends up in the watershed.

A Bowling Green State University geochemist, however, is exploring a promising way to close the loop and mitigate nutrient overflow into Lake Erie using material from the lake as a farm soil amendment.

Dr. Angelica Vazquez-Ortega, an assistant professor in the BGSU School of Earth, Environment and Society, is the principal investigator who obtained more than $1 million in grants to study the effects of dredged lake sediment as a promising possible alternative to commercial fertilizers.

The challenge in mitigating HABs, she said, is that dissolved reactive phosphorus export is continuously happening. With so much farmland around the Maumee River, the Western Lake Erie Basin is regularly receiving runoff from fertilizer application.

“The topsoil is pretty much constantly being eroded, so every year, the farmer is using fertilizers,” Vazquez-Ortega said. “A portion of the synthetic fertilizers will be used by the plants, another part will be held in the soil and another will be lost into the waterways — and as it gets lost, whether it’s soluble or particulate, that’s what Lake Erie is getting.”

Algal blooms have been a constant battle in Lake Erie, and a toxic cyanobacteria event in 2014 was national news when Toledo’s water became briefly undrinkable.

While the amount of fertilizer being lost to the watershed is not great, Vazquez-Ortega said the runoff can still prove significant due to the large farmland use in the watershed. Synthetic fertilizers are readily soluble and serve as fuel for algal blooms.

“Even though it’s only a little portion of fertilizer that is getting lost, that’s causing the algal blooms we’ve seen year after year for almost the past two decades,” she said. “The farmers are doing their best. They’re stewards of the lake and also businessmen. 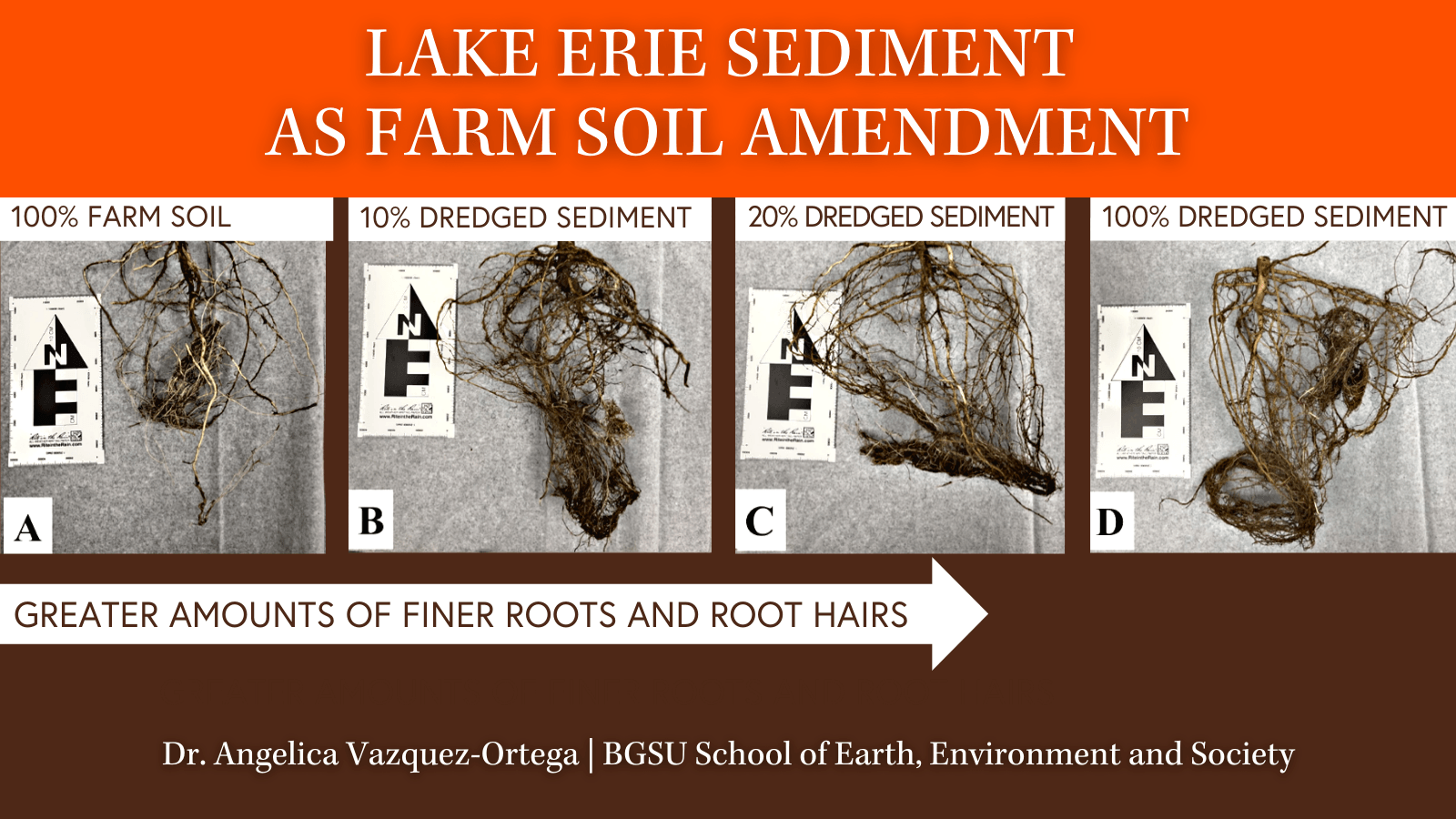 In her research with using Lake Erie dredged sediment in farming, BGSU geochemist Dr. Angelica Vazquez-Ortega has observed that more lake dredge has been correlated with a slightly higher yield and a significantly more robust root system.

Using Lake Erie dredge, though, could be useful in multiple areas. The state of Ohio already dredges 1.5 million tons of Lake Erie sediment every year, and since 2020, ports cannot dump the dredge into the open water as they had previously – meaning they must stash it somewhere else.

By using the material as a farm soil amendment, farming can provide a use for the extra material while simultaneously mitigating nutrient runoff.

“The issue that we have is that there are tons and tons of material, so what can we do?” Vazquez-Ortega said. “The idea that I am exploring is to put it back into the land because that’s where it was before. If you actually compare the Lake Erie sediment to the other fertilizers, the nitrogen and phosphate content is within the optimal nutrient value for cash crops."

Though additional research is needed, Vazquez-Ortega has observed that more lake dredge has been correlated with a slightly higher yield and a significantly more robust root system.

Prior research has demonstrated that HABs are correlated to farming practices, so using Lake Erie sediment looks to be a possible way to combat the effects of runoff.

“Farmers usually use fertilizer, plow or till when there are rainfall events, and there is a very strong correlation between when it’s raining and when farmers are using fertilizer to when there will be HABs in the lake,” she said. “If we are closing the loop with material that will be beneficial to the crops but is not so rich in nutrients, you’re hopefully not exacerbating the problem.”