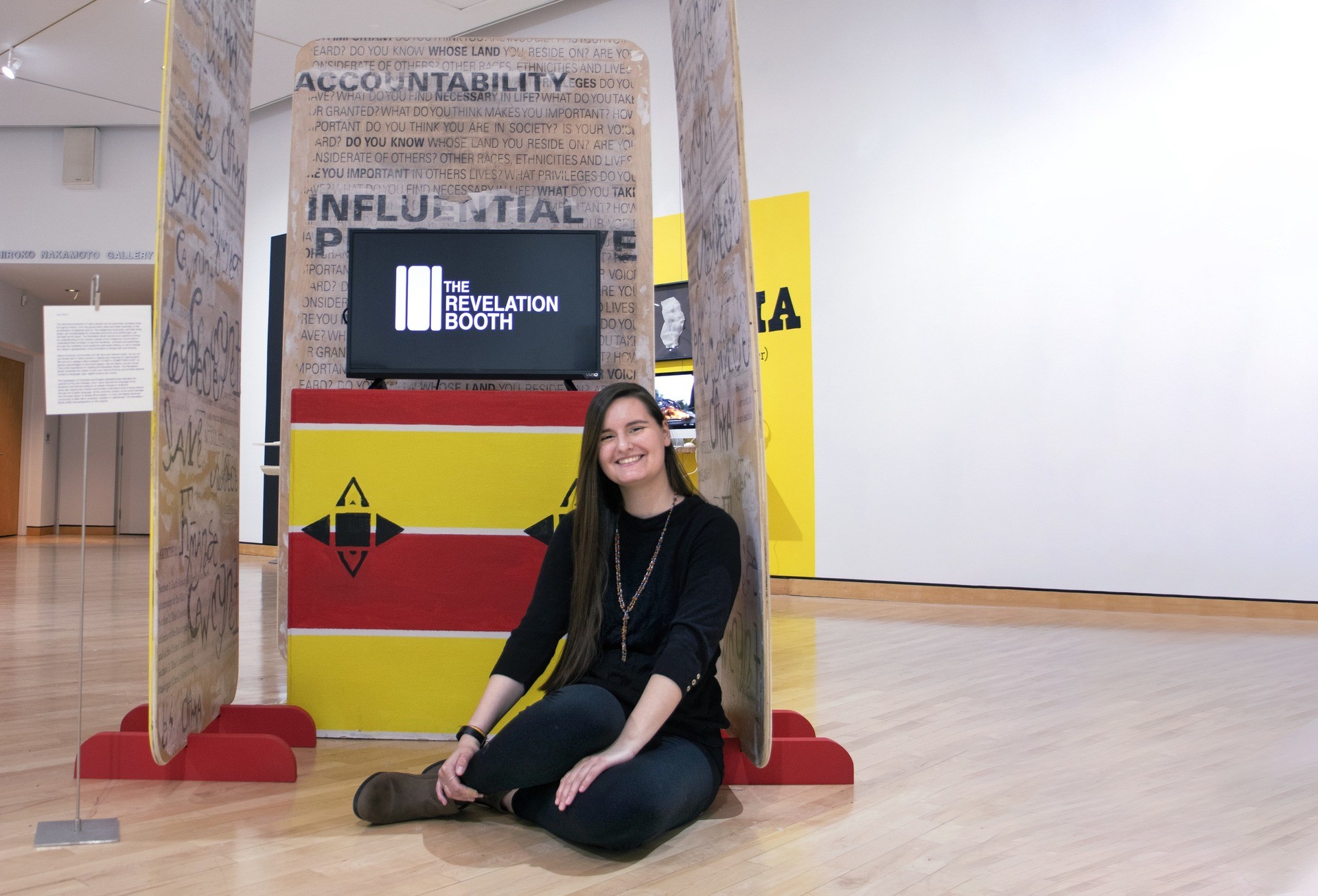 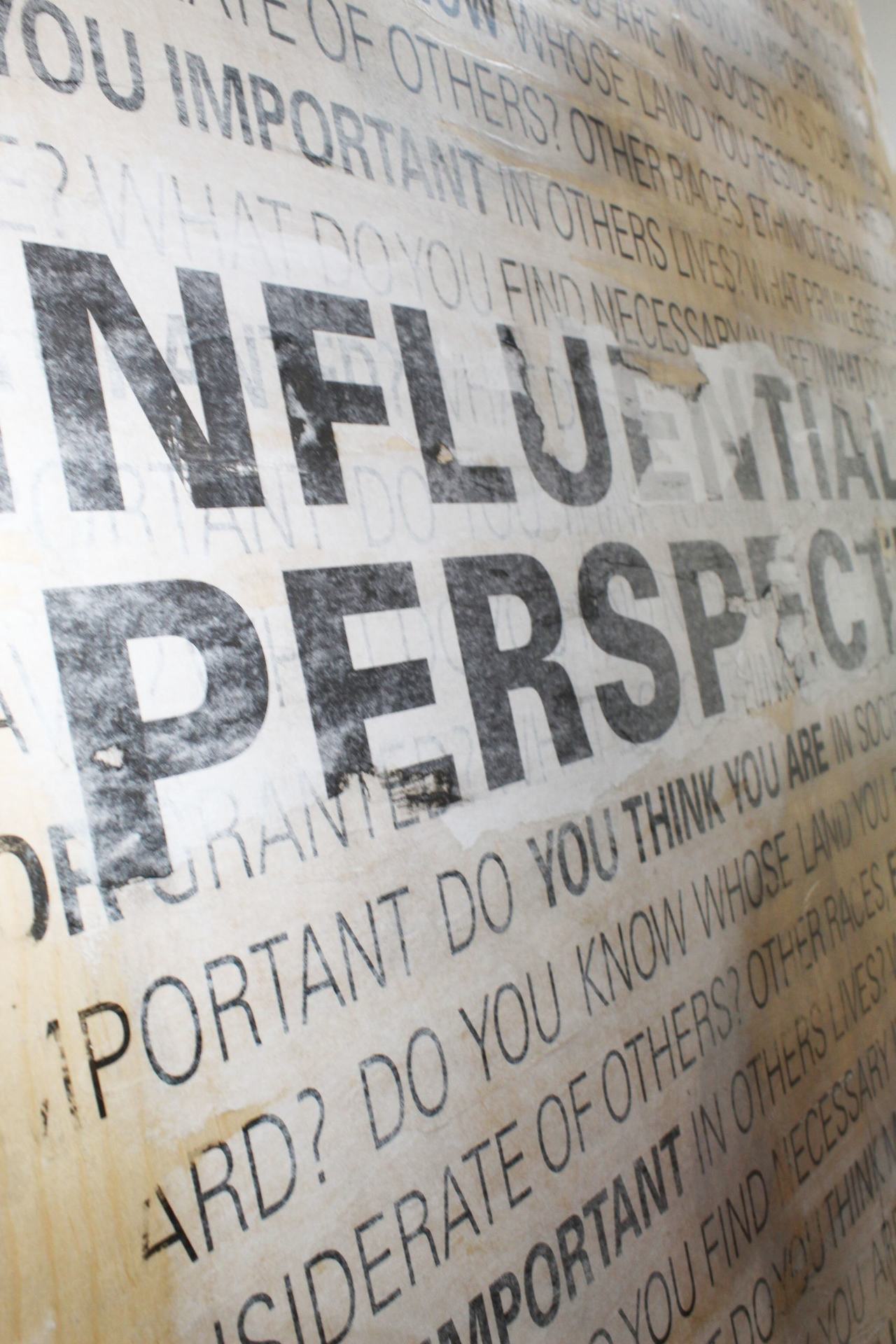 Looming larger than life, the three 7-foot-tall panels of her art installation powerfully told the story of Walton’s Native American heritage. It was a story she hadn’t really shared much before she started at BGSU in 2017.

She was born to a white mother and Cherokee/Creek Native American father. After her father left when she was 6 years old, her Native American heritage was overshadowed in Orrville, Ohio, a predominantly white community, where she was “white-passing, where if someone saw me they’d think ‘That’s a white person,’” Walton said.

“I was kind of scared to talk about it because people might think I didn’t look Native enough, therefore I wasn’t enough,” she said. However, after a first-semester 1910 multicultural course she acknowledged that she was biracial, even though she previously had been scared and ashamed to talk about it.

“Creative minds can change the world and creative design is what uplifts things in the world,” was one of the most enduring lessons she learned from a guest artist’s lecture.

“That moment was a full 180 for me when I realized there’s this whole half of me that I didn’t want to talk about. From that point on, I made it a priority to learn more about it, talk more about it and not only validate myself but also talk to other people who might be struggling with the same thing,” she said.

Before she came to BGSU, she had heard about the University from her mentor and his wife who were Falcon Flames. Walton admitted she had a bias in favor of BGSU, but knew she needed to visit other campuses to find the right fit. There was no denying when she stepped onto the BGSU campus, it felt like home.

She also chose BGSU because it offered a Bachelor of Fine Arts in graphic design, a degree that would allow her to use her artistic ability and also work with people. 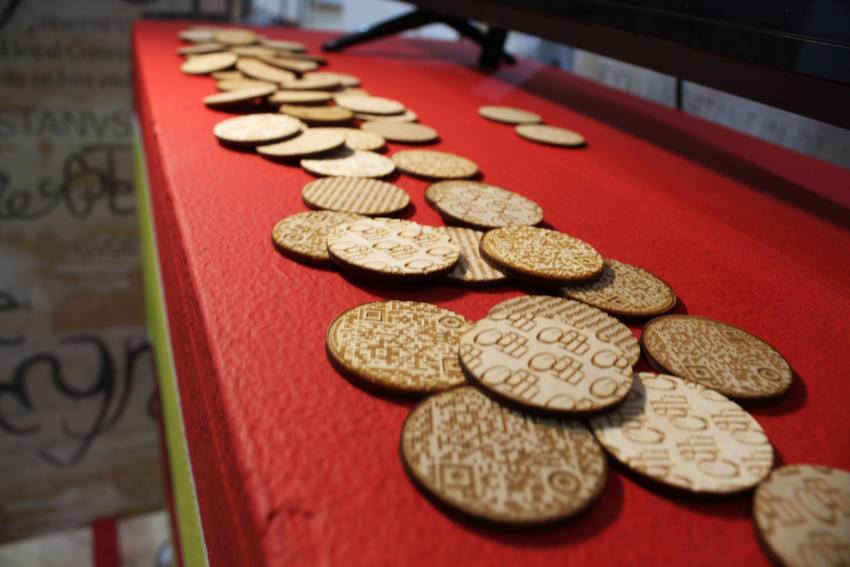 “The School of Art in the College of Arts and Sciences was like a big family that supported me and made me feel confident in what I was doing,” Walton said. “The graphic design program was perfect. It was different than what I was expecting, but it challenged me and my design thinking and critical thinking – how design not only affects you but how it affects others, other products, in a more organic way.”

There were times that were difficult but those times pushed her to do her best.

“I wouldn’t have wanted it any other way,” she said. “If I was bored, I knew I wouldn’t be in the right place, and I was never bored at BGSU.”

“Creative minds can change the world and creative design is what uplifts things in the world,” was one of the most enduring lessons she learned from a guest artist’s lecture.

“If we didn’t have design, things wouldn’t function the way they do every day. To be a part of that is very, very special. I want to help change people’s minds with design, which leads to my thesis,” Walton said.

The idea of exploring her heritage had been percolating since she reconnected with her father and other family members on the Cherokee reservation after she started college. They helped validate her heritage.

“They told me, ‘You are Native enough. You don’t have to prove those things to others.’”

She also participated in a BGSU summer experience visiting a Navaho reservation, which deepened her connection to the Native American community even more.

The foundation for her senior thesis may have started when she was born, but the creative process started with a big sketch pad whose pages were filled with questions to ask herself and others, about a goal she had in mind, and ideas for nine different design projects over the summer between her junior and senior year.

She also spent time talking with several artists and designers from different tribes to find out how they were talking about their communities within the Native American community. She realized that Native American activism is not talked about much where she grew up and where she was going to college.

“That’s where it started. That’s what I wanted to change, to bring this conversation about the Native American community to outside communities,” Walton said.

Some of the projects she created to further explore the direction of the thesis project included branded candles that referenced the Native American community, and a reflection about what protest signs might say and look like if they were for Native American people, in response to the Summer of 2020 Black Lives Matter protests.

Ultimately, she knew she wanted her installation to include her own typography and to address the diminishing use of Native American languages. In one of her prototypes, she represented the languages on three layers of paper with Cherokee, Creek, Navajo and English words that when they were held up to the window light, the words would show through. She and the faculty were intrigued by that, and eventually, that was the basis for the panels of her final project.

“I ended up taking the Cherokee language – the language that a few of my relatives know but that I never got to learn – and putting them together with the English language to be the symbolism for the project.”

Native American languages “are completely different than English. It is very difficult to learn especially when you don’t learn it from a young age,” she said. “There’s a concept of something that you belong to but which isn’t necessarily a part of you that was really interesting to me.”

Walton used the suggestion of another art faculty member to create a more personal and powerful feeling by making the installation like a voting booth. “It’s a secluded space and you’re there on your own. You hear your own breath because the space is so enclosed.”

Visitors experienced many senses when they walked into the installation including the closeness of the space, the sounds of the Native American music playing and the visual representation of words artistically layered on the walls. Walton also designed a take-away “coin” that encouraged visitors to explore the accompanying website and 360-tour of the space once they left the exhibit.

“The idea was for all these things to come at you all at once so you really got to think, understand and adjust to the information flooding your senses,” Walton said.

“To see something to discover was the heavy meaning for the title,” she said. “I wanted to step forward for Native American activism. I wanted to advocate for the Native American community and to make sure people get the truth, they understand it and they respect it.”

“One of the most important messages was for people to understand what privilege they have and what privileges they live with every single day of their lives, because people in other communities don’t have those same privileges,” Walton said. “So, if you have the ability, it’s awesome to go out and help other communities, donate to organizations that provide water, education and support to Native Americans, but I believe learning the facts and respecting the ancestry and the culture are most important.”

The project recently earned her the Kurt F. Hofmeister Student Award from the BGSU Center for Public Impact and was featured in the Cherokee Phoenix newspaper.

To experience the power of Walton’s “The Revelation Booth," visit the website and read the artist’s statement. For more of Walton’s work visit her personal website.