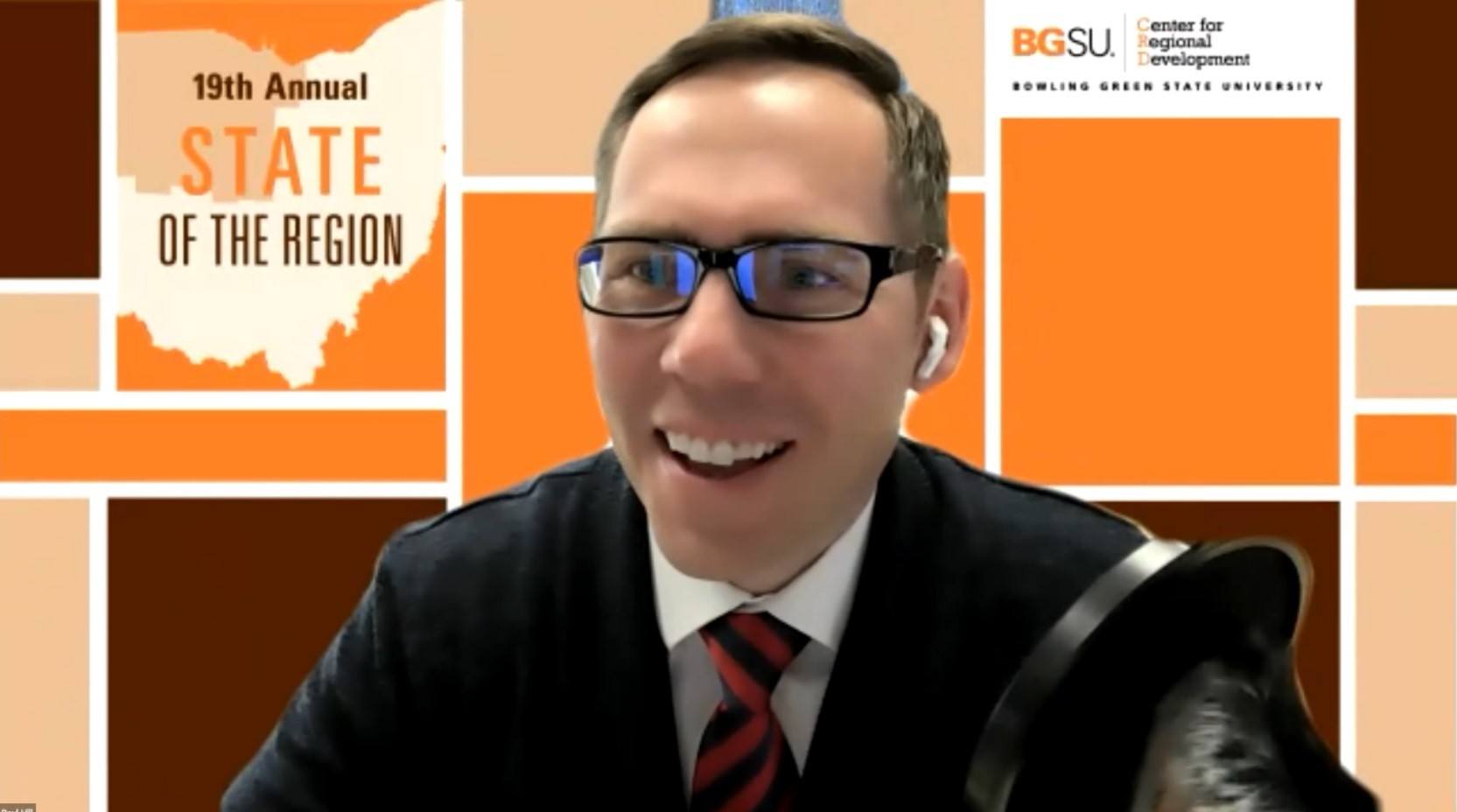 Paul Hill was the keynote speaker for the 2021 State of the Region Conference.

The conference on March 2, “Reimagining and Rebuilding Resilient Economies and Communities in Northwest Ohio,” was held virtually for the first time — and that was the point.

“This year’s conference, the19th we’ve done, was a little different,” said Dr. Russell Mills, senior director of CRD. “We wanted to highlight the impact the COVID-19 pandemic has had on the regional economy but also highlight some of the successes the region has had in attracting new economic development projects. We also look ahead to future trends that may emerge as a result of the pandemic, including things like remote work.”

The economic effects of the COVID-19 pandemic have negatively impacted communities and the lives of residents of northwest Ohio in many ways. Despite the disruption caused by the pandemic, new economic trends such as the increase in remote work and growing sectors such as logistics and distribution provide opportunities to increase the economic resiliency and quality of life of residents of the region.

“Our region could take advantage of the shift from people leaving major metro areas and looking for smaller, more affordable regions,” Mills said. “That was one of the things we wanted to focus on, and that’s why we chose Paul Hill as our keynote speaker.”

Hill is an extension professor for Utah State University, where he designs and leads economic development programs through the Rural Online Initiative (ROI) that he founded in 2018. He is a past recipient of the Utah Governor’s Medal for Science Technology as well as 25 other state, regional and national awards for his innovative programs, impacts, research and publications.

ROI trains people in rural communities to work remotely or encourages people who live in urban centers such as Salt Lake City, Provo and other larger cities in order to spread the population across the state by incentivizing them to move to rural smaller towns and work from there.

“I thought what they were doing was really interesting and maybe a model for us to look at in Ohio,” Mills said. “Ohio Gov. Mike DeWine’s budget contained a proposed $50 million investment to market the State of Ohio to people on the coasts with the hopes of having them relocate to the State for remote work. So that was our overall thinking for the event this year.”

Mills said the Greater Toledo area has more than a few things trending in its favor, specifically citing a recent report by the investment advisor website Acorns.com and a California tech company expanding to Toledo.

The Toledo region recently was ranked the best city for remote workers by Acorns’ The best 15 cities in the U.S. to work from home, ranking above larger cities such as Columbus; Indianapolis; Cincinnati; Memphis, Tennessee; Tacoma, Washington; Boise, Idaho; and Arlington, Texas.

Bitwise Industries, based in Fresno, announced in February that it plans to launch an innovation center near downtown Toledo.

“CRD is leading the update of the regional comprehensive economic development strategy for the Toledo region, “ Mills said, “and one of the themes that keeps coming up in that effort has been not only about how do we think about positioning the region for remote work but also more tech jobs?”

“Information technology jobs that can be done remotely here. It seemed like a natural thing to focus on given the regional conversations, the national rankings and some of those things. And then when you’re looking for a a model of a state that's done this well, Utah has attracted a lot of people and they have one of the fastest growing states in the country. They’ve done that by embracing remote work.”