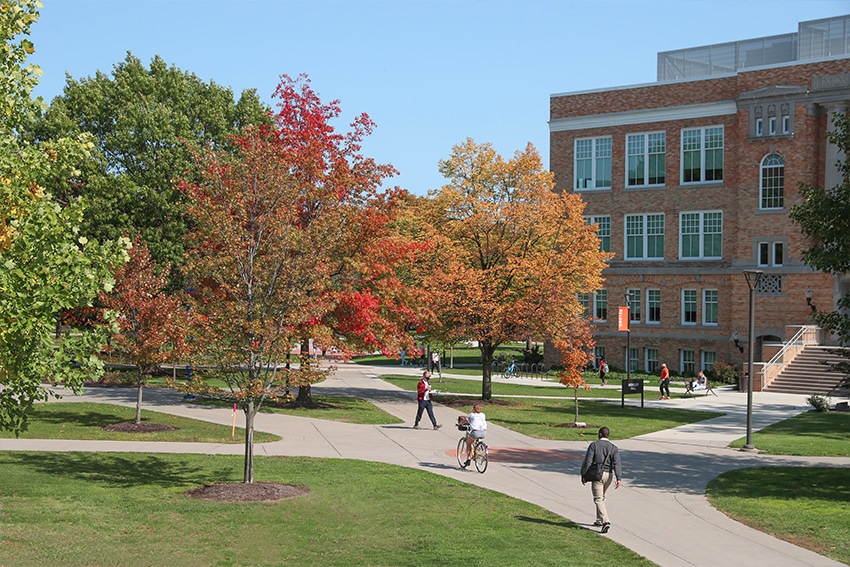 For Bowling Green State University, and universities around the world, it also signifies an important message around sustainability. October is Campus Sustainability Month, an international celebration of sustainability in higher education.

At BGSU, the month anchors a number of events and programs hosted by the Office of Campus Sustainability that encourage students and the community to take part in sustainability efforts and become agents of change.

The Office of Campus Sustainability operates within Campus Operations to fulfill three overarching goals established through BGSU's Climate Action Plan to achieve institutional carbon-neutrality by the year 2040 through the reduction of emissions; waste reduction and resource conservation; and education, awareness and outreach.

Across the country, hundreds of universities participate in Campus Sustainability Month to focus on sustainability programs, education, service projects and outreach.

"Keeping Covid-19 safety precautions in mind, we are incorporating a mix of virtual and in-person activities to facilitate informative and meaningful events to educate and engage our community," said Nick Hennessy, sustainability manager at BGSU.

While October brings recognition, promoting sustainability is a year-round effort at BGSU, from Earth Month in April to recycling and waste reduction efforts, and regular meetings of the Student Green Fund Committee.

Most recently the committee approved an outdoor LED lighting project for several areas of campus. The LED lighting cut the power usage from the previous lighting in half, which immediately saved the University roughly half of the cost of the original lighting.

“Sustainability is ideally a three-pronged approach involving environmental, economic and social aspects,” Hennessy said. “A project like this is a win-win-win.”

New this year is the President's Council on Sustainability and BGSU's Climate Action Plan (CAP). Created collaboratively in 2015 as part of BGSU’s membership in the American Colleges and University President’s Climate Commitment, the CAP serves as BGSU’s guide to reducing the institution’s carbon footprint and emissions.

The President’s Council on Sustainability was convened by President Rogers in early 2020 and will make recommendations for the continued implementation of the CAP. It will include a general council as well as subcommittees on energy, education, research and student life; transportation; and waste reduction.

“This is a collaborative effort,” Hennessy said. “Our Office of Campus Sustainability focuses full time on BGSU’s sustainability, as well as numerous academic departments that work with students to improve our efforts campus-wide."