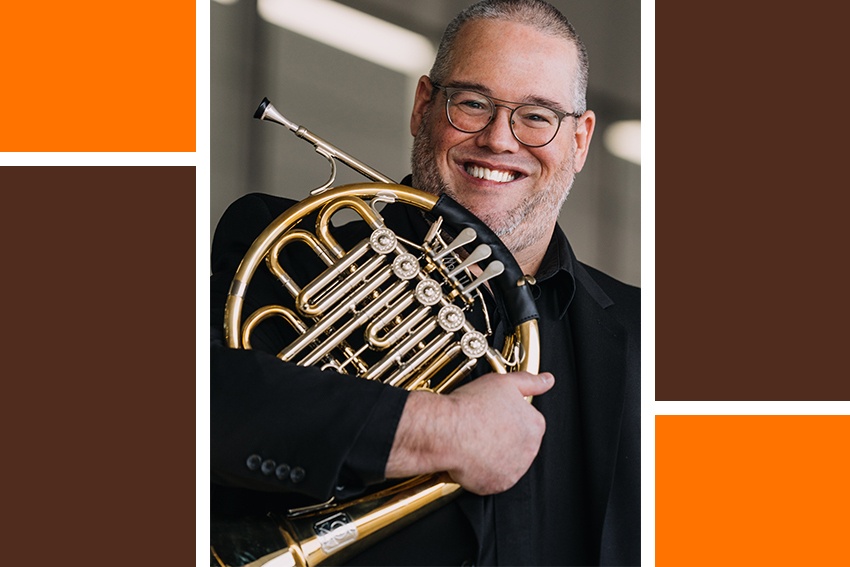 In addition to his many duties at Bowling Green State University as an instructor and mentor for numerous undergraduate and graduate musicians and his service on more than 60 graduate student committees, Dr. Andrew Pelletier has maintained a very active performance schedule that has taken him across the country and around the world.

He has been the Principal Horn with the prestigious Michigan Opera Theatre for the past dozen years, and as one of the most respected composers and performers of the horn, he averages 110 concert-style appearances each year.

Pelletier, professor of horn in the College of Musical Arts (CMA) and a Grammy Award-winning performer, recently received the 2020 Professorship of Creative Arts Excellence Award from the University.

Pelletier, who arrived at BGSU in 2004, holds a Doctor of Musical Arts from the University of Southern California, graduating with highest honors. He has performed more than 1,600 times and is in demand as a chamber musician, a specialty that had him sharing the 2005 Grammy award for Best Classical Recording, Small Ensemble, for the performance of Carlos Chavez’s “Sonata for Four Horns” with his colleagues from Southwest Chamber Music in California.

In her letter recommending that Pelletier be honored with the Professorship of Creative Arts Excellence, Dr. Susan Nelson, assistant dean of undergraduate studies in CMA, cited his “remarkably active schedule as a performer” at major international venues and his innovative approach to composing music for the horn.

“In the music profession, Dr. Pelletier is a recognized advocate of new music for the horn with many annual commissions and premieres,” she said. “A number of these commissions have been for works outside of the traditional format for classical pieces, showcasing music composed in a modern style for the instrument. This type of music elevates the horn by bringing it to the cutting edge of innovation in both composition and performance practice.”

In addition to his teaching, student mentorship and his heavy performance schedule, Pelletier’s reputation in the professional ranks has brought him much acclaim. He is the president of the International Horn Society, was the top prize winner at the American Horn Competition in 1997 and 2001 and he has been featured as a solo artist at numerous symposia. His commitment to new music is evident in the more than 50 works he has commissioned and premiered for the horn as a solo voice.

When endorsing Pelletier’s nomination for the Professorship of Creative Arts Excellence honor, Dr. William Mathis, dean of CMA, said Pelletier has elevated the University’s standing in the musical arts world while also providing an ideal role model for his students.

“Dr. Pelletier’s national and international reputation as a horn performer and pedagogue is well established,” Mathis said. “He provides a wonderful and inspiring example to his students of hard work, dedication and, most of all, his musical expression and insistence of high quality in performance.”