“I thought the word strive would express the level of ambition and achievement that we are all reaching for when going through the job search process,” Kiesewetter said. “Always striving to be the best we can be and to reach our ultimate goals.” 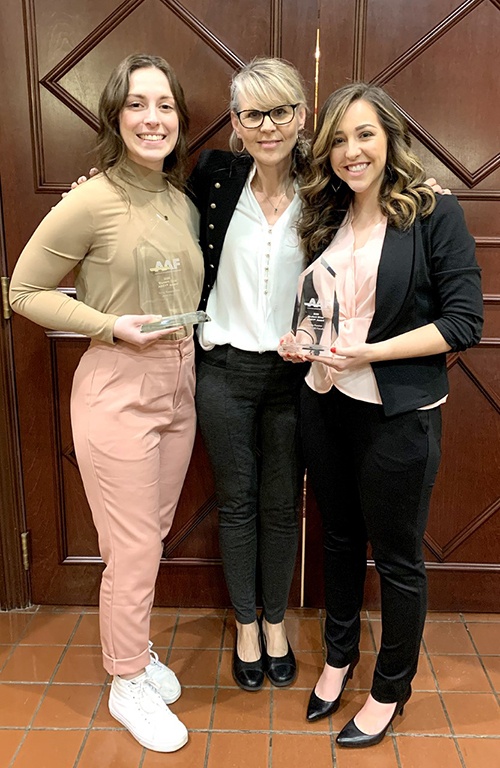 Strive was created for an independent study project in 2019 alongside Jenn Stucker, associate professor and graphic design division chair. Kiesewetter’s project was one of 12 gold winners with 160 submissions in consideration. As a gold winner, her work advanced to the regional AAF competition.

“I cannot thank Jenn and all of my professors enough for all of the support and guidance that they have given me throughout my years as a graphic design student at BGSU and for always encouraging me to aim high,” she said.

Emily Feaster, a 2019 graduate of BGSU, received the Silver ADDY award for “Into the Depths,” which was her 2019 senior thesis project. Her project addressed the environmental issues of shark fishing and shark finning, which has contributed to population decline. Shark finning is the act of cutting of a shark’s fins while they are still alive and discarding the animal back into the ocean. The fins are then used to make shark fin soup, a delicacy in east Asian countries.

“Activism and awareness on the other hand was new for me. There are so many misconceptions about sharks that cause humans to lack empathy for their struggle,” Feaster said. “The majority of the general public is unaware that sharks are endangered almost to the point of extinction, let alone the cause.”

Feaster created hand-crafted ceramic bowls with ceramic decals of hand drawn illustrations of sharks. Bowls were packaged in a laser-etched box and included a thank you and brochure of research information about shark finning. Proceeds from the sale of the bowls went to the Mote Marine Laboratory and Aquarium in Sarasota, Florida. During her thesis project, Feaster worked with BGSU graphic design faculty and John Balistreri, ceramics professor.

“It was such a privilege to be invited to the ADDY awards, let alone win one. Seeing all of the amazing work that comes out of the Toledo area was overwhelming in the very best way,” Feaster said. “I was proud to be a part of something that felt bigger than myself. There was a sense of community at the event that couldn't go unnoticed.”

Lauren Henderson, who won a Gold ADDY in the student division of the 2019 American Advertising Federation Toledo competition, went on to the District 5 competition, where she won a Silver ADDY for her project “Coral Roots.” Henderson graduated in May 2019 and is currently a designer with shark&minnow, a strategy and design consultancy in Cleveland.