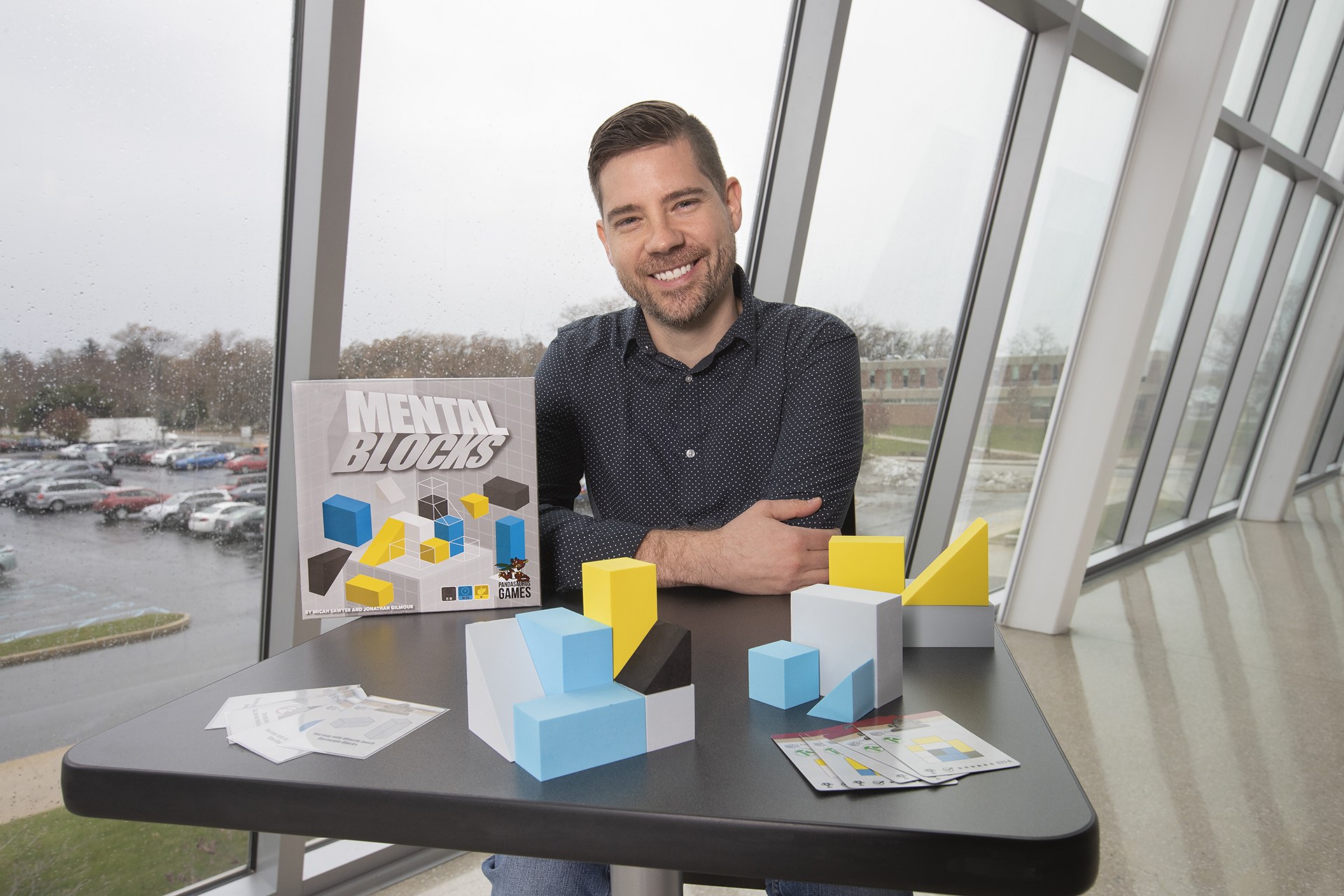 Many people claim that board games and physical puzzles are becoming obsolete. For Micah Sawyer ’03, this alleged disinterest is a puzzle to solve in itself. His recently published game Mental Blocks has found success since its release in August 2019.

“I had always wanted to make games,” Sawyer said. “When I was at BGSU, I did four years in the Fine Arts Center and I was always challenged to find ways to make art. Graphic design was making art for someone else’s purposes, and fine art always taught us to make art for our purposes. This game actually came out of an art game I made.”

Sawyer graduated from Bowling Green State University in 2003 with a dual major in digital arts and computer science. He spent much of his time in the Fine Arts Building before many of the digital art classes shifted to the Wolfe Center for the Arts. After working five years in computer tech, Sawyer found himself working at NBC for graphic design, even being nominated for an Emmy during his time there.

“A lot of what I learned at BGSU, the programing side connected strongly with when I was in tech, the art worked really well when I was at NBC and where I’m at now combines all of those skills,” he said.

Mental Blocks had a long journey from concept to co-op puzzle game. Starting as a personal project, the game can be played with two to nine players as they try to complete 3D puzzles with foam blocks; the catch is that everyone only sees one perspective of the design. Time limits and additional conditions, such as not being able to talk or only being able to touch certain colors, causes the game to become a hectic scramble of communication very easily. The difficulty ranges from simpler to more complex, allowing for families with young children to advanced players to get in on the fun.

"A lot of what I learned at BGSU, the programing side connected strongly with when I was in tech"

“The key driving artist statement of the game is, in the political climate we’re in right now, you have people looking at the exact same thing and viewing it as two totally different things,” Sawyer said. “I started with that idea of is there a world where we can have drastically different opinions on something and both of us be right? Instead of saying ‘your opinion is different than mine, therefore you’re a terrible person,’ we take a step back and listen and elevate our own understanding of a situation and come to a broader perspective,” he said.

Sawyer brought Mental Blocks, then called Crazy Block Game, to a group in Perrysburg, Ohio, where other game designers play each other’s games and offer feedback. Sawyer was surprised to hear such a positive response — his peers urging him to make it into a full-fledged game for store shelves.

It escalated further when Sawyer showed it to Jonathan Gilmour at one of these meetings. Gilmour helped flesh out the game by adding a “traitor” element, a player who tries to prevent the other players from solving the puzzles. Gilmour, excited to work on this game with Sawyer, pitched it to a publisher, Pandasaurus Games. Liking the idea of the game, they suggested the name be changed to Mental Blocks.

“I am really, really bad at names,” Sawyer said, laughing. “Through all of development, I called it Crazy Block Game because that is the extent of my naming skills.”

Sawyer has had a long journey from his time at BGSU, and Mental Blocks has gone through its own journey to find success. Sawyer hopes that his game will inspire discussion among families, friends and organized groups. After all, it only takes a minute to learn, and about 10 minutes to play.

“Mental Blocks started as an artist statement that turned into this interactive inspiration,” Sawyer said. “It was finding something that I deeply believed in from an artistic sense and how to bring it to life. Some people use painting, some people use digital and I use games.”