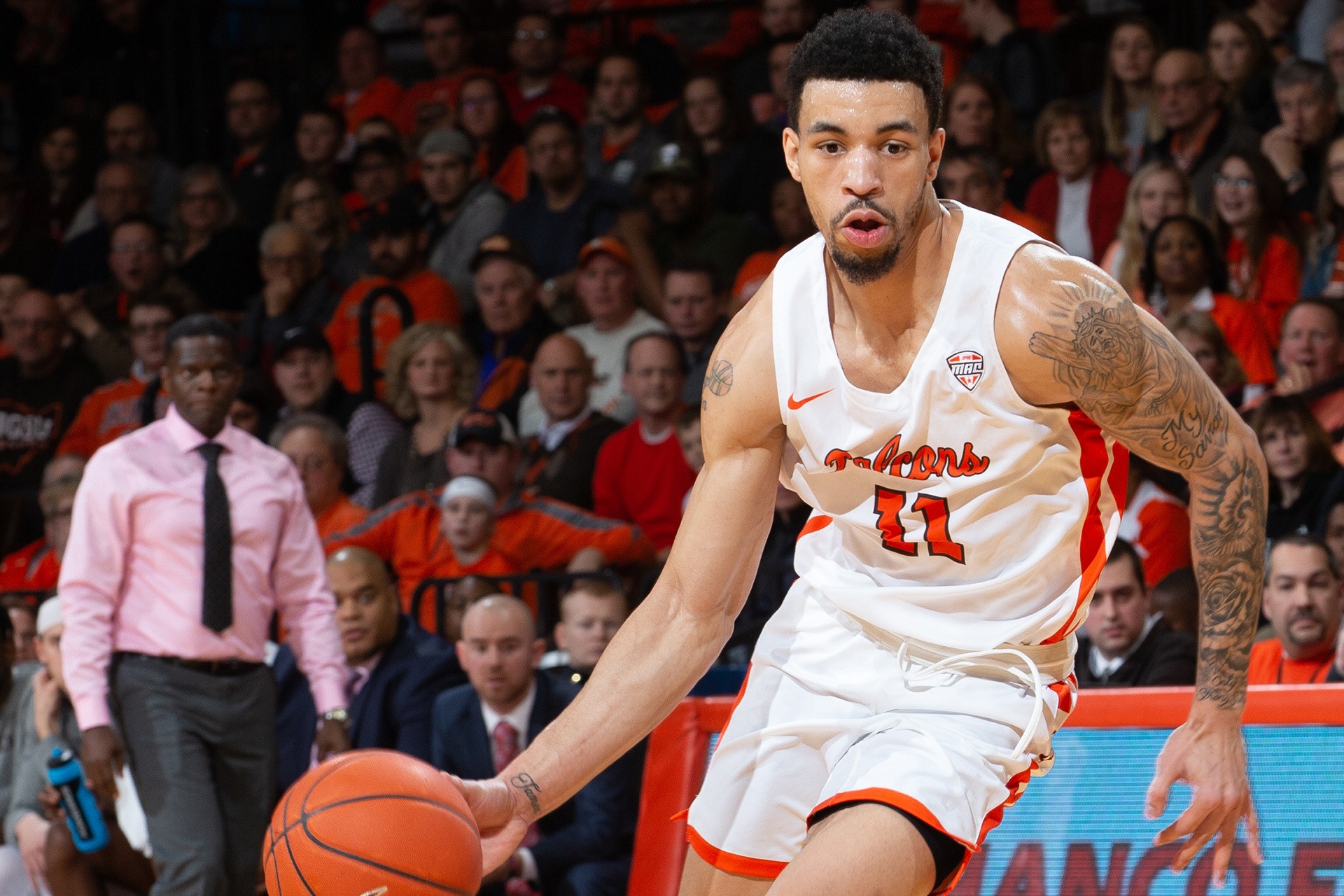 Student-athlete a shining example of how the University changes lives

Men’s Basketball standout Antwon Lillard ’19 received his Bachelor of Science in sport management from Bowling Green State University in August after completing his required internship. According to Head Coach Michael Huger, Lillard is a shining example of how BGSU and Division I athletics change lives.

“Getting him into BGSU and having the opportunity to coach him for four years was special,” Huger said. “He took to the discipline — whatever I threw his way. He didn’t give up, and he stuck with it. I’m extremely proud of Antwon’s accomplishments — both on and off the court.”

The story of how Lillard came to BGSU from Cleveland on a basketball scholarship is one of gritty determination and transformation and is emblematic of how BGSU is an outstanding framework for students with diverse talents and backgrounds to Belong, Stand Out and Go Far.

Lillard was a late qualifier out of Cleveland Central Catholic High School, where he lettered for four years. He had distinguished himself as a three-time team captain, leading his team to a 20-6 overall record and a spot in the Ohio High School Athletic Association (OHSAA) Division II state title game his senior season.

It didn’t take long for Huger and his staff to realize that this recruit was going to be exceptional on and off the court. He took the dual role of being a student-athlete seriously from the start, putting in tremendous effort at practice and in the classroom.

“I used basketball as my motivation to keep going and to also do my best in my coursework as I thought about life after basketball,” Lillard said. “It wasn’t easy to get everything done as a student-athlete and I feel a real sense of accomplishment to graduate after going to practice and to the weight room to train every day on my own, while also going to class and taking care of my academics.”

As is the case with all of BGSU’s 400-plus student-athletes, Lillard had to balance his team responsibilities with a strong academic focus. That is the culture and emphasis across all 18 sports in which BGSU competes at the Division I level. Lillard points to Assistant Coach Mike Summey as a particularly strong influence.

“Coach Summey was a guy who was really big on academics,” Lillard said. “Of course, he did his job as far as basketball and he brought energy to the table and made sure we were taking care of business on the court, but most importantly he always came back to how important it is to take care of your academics and also to represent the team in the best way possible 24/7.”

According to Taylor Dennehy, the assistant academic coordinator who works with Men’s Basketball, Lillard came to BGSU to not only play basketball but to take advantage of everything the University offers academically.

“Antwon has never let his background define him. He understood that his scholarship was for more than just playing basketball; it was also his opportunity to get a degree and graduate,” Dennehy said. “Despite the challenges of balancing practice, travel and games with academics, Antwon always worked hard in his classes. He was never afraid to ask for help, as he always wanted to get better and learn more. He formed great relationships with people on campus, and enjoyed learning from his professors, especially in sport management and the entrepreneurship program.

“He was a kid from Cleveland’s inner city and he wasn’t sure which way to go. Now, I’m just so proud of him for persevering and getting his undergraduate degree. He can do whatever he wants now and that’s the most important thing. "

On the court, Lillard played a pivotal role during his four seasons as a Falcon Men’s Basketball player. Huger pointed to Lillard’s contributions as a starter, but also off the bench as was the case in last year’s contest in his hometown against Cleveland State.

“Antwon was a little over anxious and I just wanted to take the pressure off of him, and the best way I knew how was taking him out of the starting lineup,” Huger recalled. “Now that didn’t reduce his minutes; it actually increased his minutes because he started to play better and embrace the role.”

Huger credits Lillard’s performance as the difference in the team making it to the MAC Championship for the first time in 17 years.

“It’s what he brought to us off the bench and he gave us that spark,” Huger said. “We had that change of pace with Antwon in the game and he was definitely the spark plug for that group off the bench.”

For Lillard, his collegiate basketball career hit a new high when the Falcons defeated the 18th-ranked University of Buffalo Bulls in front of a record-breaking crowd of 5,000 fans in February at the Stroh Center.

“Being able to pack the Stroh Center was always one of my goals,” Lillard said. “Getting a win in front of that sold-out crowd and giving the fans what they wanted to see was definitely one of my biggest accomplishments at the Stroh.”

Lillard is hoping to continue his basketball career, either overseas or by playing in the NBA G League, the National Basketball Association's official minor league organization. After that, he is planning to put his sport management degree and Division I competition experience to work.

“My BGSU degree will definitely come into play in my area of interest, which is coaching,” Lillard said. “Playing at the Division I level is also an important part of my resume, and being on a team that made it to the championship will help as I get into coaching or training, or even start my own training business or AAU team.”

Lillard credits his overall BGSU experience for helping him grow into a more mature and capable person. In addition to his academic and athletic credentials, he points to a more developed ability to have strong personal and professional relationships.

“I think that’s one of the biggest things in today’s world," he said. "Those relationships help you to find a good job while helping others along the way. Thanks to BGSU, I have all the tools now to make that happen.”

For Huger, seeing Lillard and others in his class cross the stage at commencement was particularly meaningful as the first graduating class he saw through from freshmen to seniors.

“He was a kid from Cleveland’s inner city and he wasn’t sure which way to go,” Huger said. “Now, I’m just so proud of him for persevering and getting his undergraduate degree. He can do whatever he wants now and that’s the most important thing.

"It’s bigger than basketball. Basketball may last another 12 years for him if he’s lucky, but then after that, the real world begins. He’s prepared for it with that degree that he got from Bowling Green State University.”