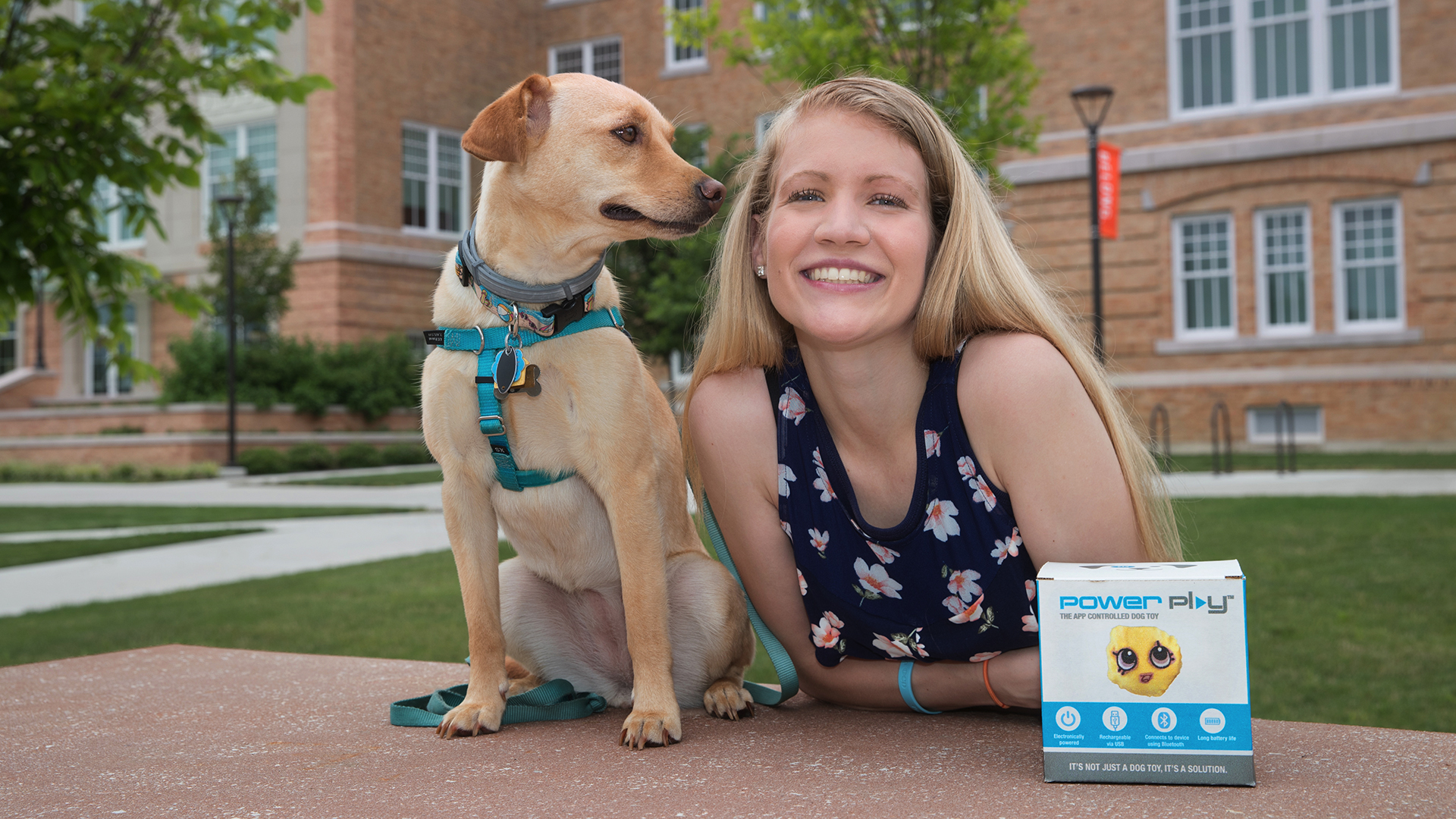 Kristen Grom arrived at Bowling Green State University after a road trip she took with her family to check out prospective universities. Now that she’s graduating with a 3.969 GPA and three VCT co-ops under her belt, she couldn’t be happier with the decision.

Co-ops enable student to not be ‘just a number’

After finding a home at BGSU, Kristen Grom excels in myriad fields of VCT program

Kristen Grom arrived at Bowling Green State University after a road trip she took with her family to check out prospective universities. Now that she’s graduating with a 3.969 GPA and three VCT co-ops under her belt, she couldn’t be happier with the decision.

Kristen Grom arrived at Bowling Green State University after a disappointing Ohio road trip she took with her family to check out prospective universities. The trek had concluded in northwest Ohio and decided since they were nearby, they might as well check out BGSU.

Looking back, Grom, one of the newest members of the Class of 2018, couldn’t have been happier with the decision.

“It was the campus visit that made me choose BGSU over the other schools,” said Grom, a Pittsburgh native. She had gotten a bad vibe from another area university.

“I came to Bowling Green and the students just genuinely loved the University. It was the atmosphere on campus and it was the people who worked here. I understand they are trying to sell me on the school, but I felt there was a genuine affection for the University by the students I met as well as faculty and staff. They really seemed interested in me attending BGSU. I wasn’t just a number.”

Grom’s visit happened to be on Presidents’ Day, and she met Van Wright, assistant to the vice provost for strategic enrollment planning.

“He recruited me and told me about the Alumni Laureate Scholarship, which would have been a full ride,” she said. “I was in the running and I made it to the top 15, but I had already determined I wanted to be here regardless if I got the scholarship because I really did feel like I was more than a number right away.”

Grom participated in commencement on August 4, knowing that her time at BGSU was well spent. She had a 3.969 grade-point average as a Visual Communication Technology (VCT) major, completed three successful co-ops in her program, and, on top of that, was a 2018 Hatchling.

“I did photo, video and a lot of graphic design work with my co-ops,” Grom said. “Graphic design is probably my favorite thing to do, even though it isn’t included in the VCT program. The most beneficial thing about the VCT program is the co-ops, it really is.

“The classes are great because it’s a hands-on program, but the co-ops, that’s real-world experience — the kind that employers are looking for — and it’s where I gained the most knowledge. It’s also where I networked and where I learned what I am going to be using after college in the real world.”

Her first co-op was with the University’s Office of Marketing and Communications, where she worked with the web and new media team designing graphics and web pages. She also did some writing and graphic design for the department.

Grom’s second co-op was with Marathon Petroleum in Findlay, Ohio, where she worked in the graphic services department. She traveled to some of the company’s oil refineries to do video work. She also helped write the scripts and did a lot of post-production video using Adobe After Effects, as well as motion graphics and graphic design.

She worked with the Ohio Department of Transportation (ODOT) for her third co-op. She appealed to ODOT's social media followers by informing the general public about upcoming and current projects by using infographics, graphic design, video, and photography skills.

“For their social media, I utilized graphics and video to pump it up and get the word out about the road projects we were working on,” Grom said. “When I was with them, they were redoing a lot of interchanges along I-75, so there were a lot of frustrated drivers. I used video and info graphics in a humorous way to try to alleviate some of that frustration.”

In addition to her co-ops, she did a number of freelance projects, including video and graphics work for The Andersons, an agribusiness headquartered in Maumee, Ohio, and a rebranding campaign for a chiropractor based in Toledo.

“I do some photography on the side as well. I like to keep busy,” she said, laughing.

One of her proudest accomplishments came this past spring during The Hatch, where BGSU students vie for funds to launch their businesses in a format similar to the popular television show "Shark Tank."

Grom, who loves dogs, came up with the idea for Power Play, an app-controlled dog toy with a removable, washable and replaceable exterior. Her toy was a hit at the Hatch and investors backed her business with additional referrals to business incubation for further development.

“I’m currently in incubation for Power Play this summer, so hopefully the product will be on the market soon,” she said. “Even though the toy is app-controlled, the big selling point is the plush exterior that’s removable and replaceable. There will be a constant revenue stream because the plush is really cheap, so there will be plenty of opportunities to buy new ones. Plus, they’ll be scented and there will be different characters available for purchase that the owner, family and friends will want to buy for birthdays and holidays. It combines new-age technology with natural instincts for the dog, making it marketable and successful.”

Grom designed the logo for the toy and made a commercial for her pitch. Her dog, Rosie, also briefly appears in the commercial. Whatever happens with her dog toy, she said she has the drive and passion to stick with it.

Next, she will attend Point Park University in Pittsburgh, where she will work toward a Master of Arts in communication technology. She will be a graduate assistant with the university’s honors program, working 20 hours a week while attending school full time.

Before she leaves, she wanted to thank her parents, Tom and Marla Grom, and adviser for the support she received while she was at BGSU. Grom had to deal with some health issues, as well as three consecutive concussions in one semester.

“I just had a string of bad luck,” she said. “You just have to take what you’re given and make it work out. For me, I’ve just been really honored with how my parents really supported me, whether it was the Hatch and me wanting to try that out or supporting me with my health or whatever I wanted to do. My adviser in VCT, Lori Schultz, really looked out for me along the way as well.”