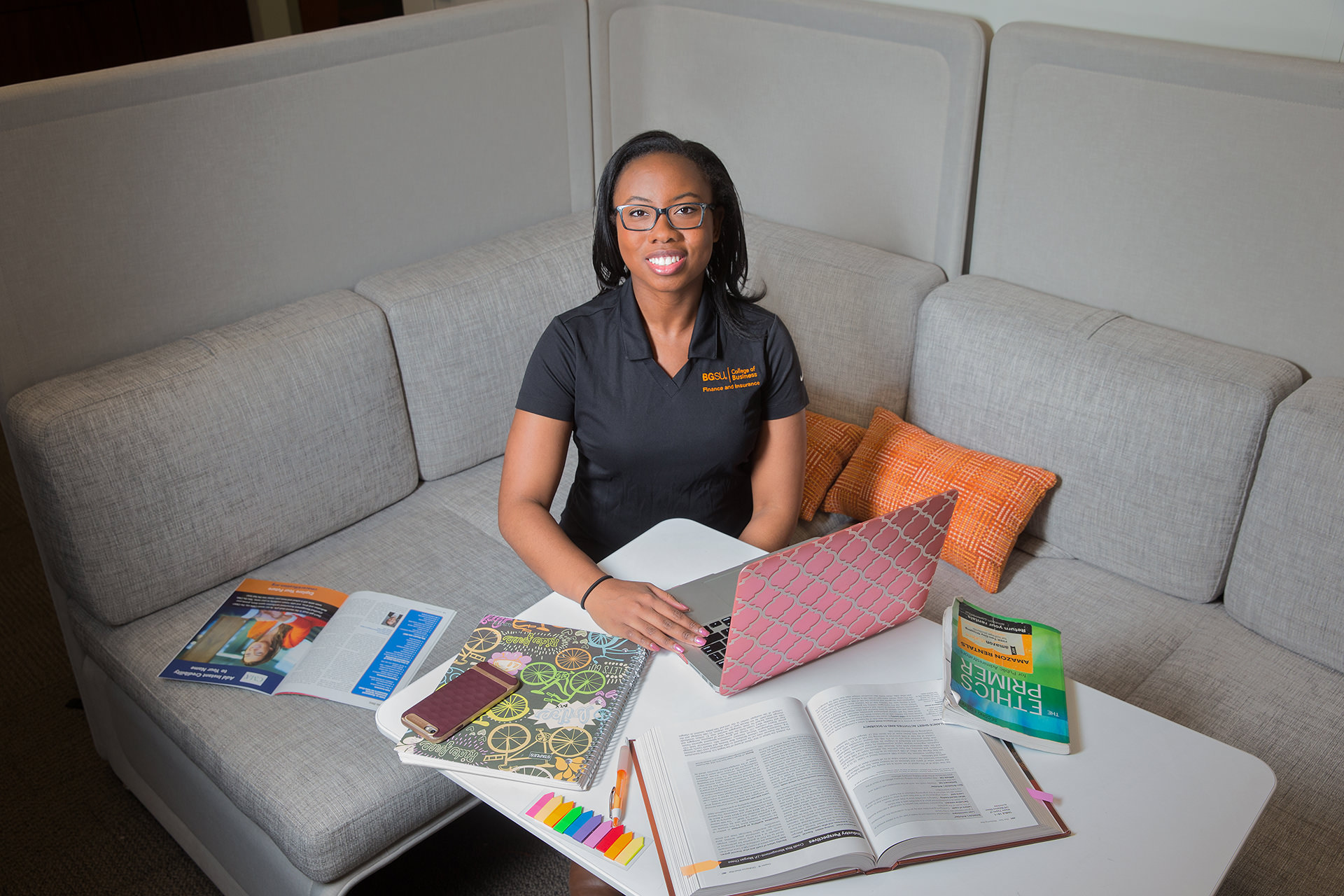 Graduate felt like she belonged at BGSU 'even before I enrolled'

Gabrielle Yarbrough’s business degree specialization – finance and insurance, with a minor in business pre-law – is often associated more with analytics than with soft skills. But the Akron, Ohio, native said a focal point of her Bowling Green State University experience has been her interactions with other people, especially helping other students.

It started with the sense of belonging she felt when she first considered BGSU for her business degree.

“I looked at 10 other schools and was even offered a full ride at one,” she said. “I chose BGSU because of the people – how kind and helpful everyone was, even before I enrolled.”

That feeling has continued throughout her years at the University. Often, she said, it is the “little things” that have made a difference. “I like how engaged Dean Ray Braun was with me and the other first-year students, making an effort to get to know everyone by name. I think it says a lot that he goes out of his way to learn our names in the first weeks of the semester.”

She has excelled in the classroom, but beyond her business studies, she has shared her time and talents with a cause that holds great meaning for her: diversity. She became a mentee in the Office of Multicultural Affairs’ Falcon Success Initiative and in the Office of Residence Life’s SMART program. Both offer social, cultural, leadership and academic support to first-year students of color; the SMART program focuses on students living on campus, while the Falcon Success Initiative is open to students on and off campus.

I chose BGSU because of the people – how kind and helpful everyone was, even before I enrolled.

These experiences became a springboard for her to help others. During her sophomore and junior years, she served as an Office of Multicultural Affairs Ambassador, empowering peers and the community to engage with topics of cultural awareness, diversity and inclusion.

Within the College of Business, she has served on the Dean’s Advisory Council on Diversity and Inclusion, and she joined Women in Business Leadership. She also coordinated special events for Gamma Iota Sigma, the international fraternity for insurance, risk management and actuarial science students.

Her academics, leadership skills and involvement contributed to her selection as a Dean’s Scholar, an honor that she said motivated her to be even more successful academically.

“I would consider it my most meaningful experience,” she said of the merit-based scholarship. “It has helped fuel my drive to be successful, and it’s been a great opportunity to connect and network with different organizations. I’ve become a lot more confident because of it.”

This confidence helped Yarbrough secure an internship with the Federal Reserve Bank of Cleveland, which has been an important step in preparing her for her career. She is in the enviable position of receiving multiple job offers but hasn’t decided which one to accept. Graduate studies are also part of her plans.

Reflecting on her academic career, Yarbrough said, “I am very glad I chose BGSU; the opportunities here have helped me tenfold.”