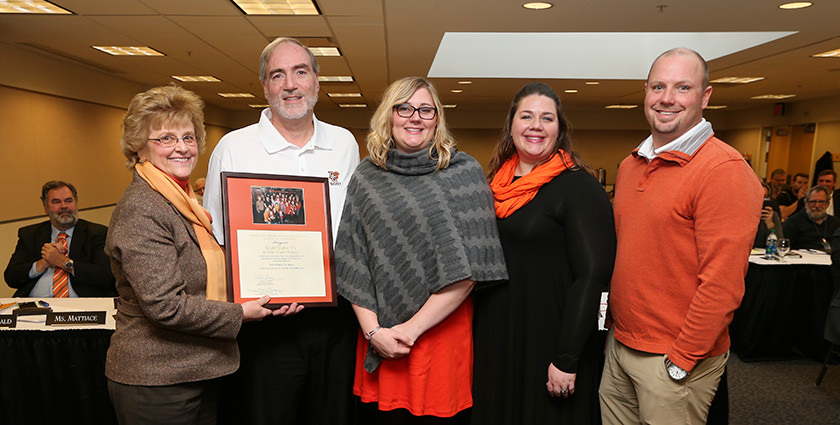 The BGSU campus continues to change and improve, both aesthetically and functionally, thanks in part to the support of alumni and friends. The BGSU Board of Trustees at its year-end meeting Dec. 9 approved the naming of a number of campus spaces and facilities in honor of donors as well as initial funding for the next stage of major building upgrades. In addition, student academic and career opportunity will be enhanced with the board’s approval of a new major in software engineering, which will be the only program of its kind among pubic colleges in northwest Ohio and one of only two in Ohio.

“We are deeply thankful to our donors who generously help to create learning environments that allow our students and faculty to do their best work,” said President Mary Ellen Mazey. “Their selfless giving will help in changing lives.”

Chief among the renamed spaces is the Slater Family Ice Arena.

The upcoming retirement this month of Bill Schurk, sound recordings archivist at the Music Library and Sound Recordings Archives, presented the opportunity to name the facility for the one whose name has become synonymous with it. With the trustees’ approval, the archives will be named the Bill Schurk Sound Archives. Since joining the popular culture library in 1967 following his 1966 graduation from BGSU, Schurk has built the archive into the most significant resource of its kind in an academic library in North America, earning BGSU and himself an international reputation. He has accomplished this through careful curation, donor management and content expertise, along with his own substantial lifetime giving to expand the archive’s focus and holdings.

In the case of donor Shayne Thomas, his decision to give was to honor the professional achievements of his wife, Dr. Angela Falter Thomas, and to commemorate their 25th wedding anniversary. The student lounge in the Education Building will now be known as the Angela Falter Thomas, Ph.D., Lounge. A 1989 BGSU alumna and faculty member in the School of Teaching and Learning since 2009, Falter Thomas was named BGSU’s Collegiate Middle Level Associate Professor of the Year in 2015 and received the College of Education and Human Development’s Excellence in College Teaching Award.

The University honors another alumnus, Paul Agne, who received a bachelor’s degree from the College of Education and Human Development in 1955. Agne established a BGSU student scholarship in 2014 and has designated a significant bequest to BGSU from his estate. In appreciation of his generosity, the trustees approved the naming of the Paul Agne Conference Room in the Education Building. Agne spent his career in education, teaching for 30 years in Ohio, as well as coaching and serving as an assistant athletic director.

In other facilities-related business, the board took action to sustain the University’s progress toward the goals outlined in its Master Plan, which comprises campus development through 2022. The trustees gave their approval to the 2017 classroom upgrade project, the next step in an ongoing improvement plan designed to create flexible learning spaces that best promote teaching and learning and are right-sized for today’s curriculum needs.

With $1.3 million from the classroom upgrade reserve funds from the Campus Master Plan, eight classrooms in the Education Building will be converted into seven active-learning classrooms, including collaborative learning spaces for faculty and students. In addition, 116 Business Administration Building will receive audio/visual upgrades to complete its transition to an active-learning classroom.

The board also approved the demolition of two buildings that no longer fit with the long-term Strategic Plan and whose renovation would require costly investments. Now that the School of Media and Communication has moved to the Michael & Sara Kuhlin Center and occupants of the Family and Consumer Sciences Building have relocated primarily to the Health and Human Services Building and Eppler Center, both West Hall and Family and Consumer Sciences can be demolished. The cost will be $1.5 million, which will also include the removal of the mechanical well that previously served the Founders Hall cooling towers. The well is no longer used since a centralized cooling facility has been constructed.

Removal of the two buildings and the well will create more green space along the southern edge of the Traditions Quadrangle that could eventually be used for a memorial garden or other landscaping.

In order for the University to proceed with the next projects identified in the Master Plan, the board authorized the issuance of general receipts bonds of up to $35 million, anticipated to be issued in several increments as needed. Planned are the major renovation of University Hall, various demolitions and collateral projects related to the renovations, and preparations for the eventual expansion and renovation of Hanna Hall. The Hanna Hall project will be presented to the board later in the fiscal year; the debt funding will allow the University to gather preliminary designs and cost estimates.

In academic action, the board approved a new undergraduate major in software engineering, which will complement the existing major in computer science and provide students additional opportunities for employment in a rapidly growing field. Graduates will help meet the increasing demand for professionals with the skills to develop software programs. According to the Bureau of Labor Statistics, there were 1.1 million new jobs in software developer positions in 2014, with a prediction of 17 percent growth that year, far exceeding the average for all other occupations.

The curriculum will follow the guidelines of the Association of Computing Machinery for software engineering, which are supported by the National Science Foundation. They include knowledge in 10 key areas such as mathematical and engineering fundamentals, software modeling, analysis and design, and security. After the program is approved by the Ohio Board of Regents, the Department of Computer Science plans to apply for accreditation from the professional accrediting organization ABET/EAC; acceptance will make it the only accredited software engineering bachelor’s program in Ohio and one of only 21 in the nation. The University expects to begin offering the new major in fall 2017.