Kinney book looks at Detroit through lens of popular culture 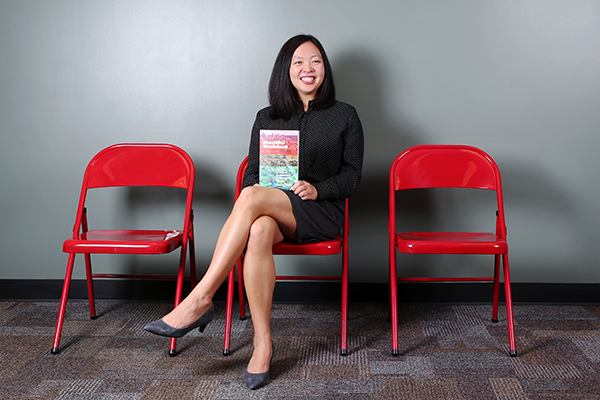 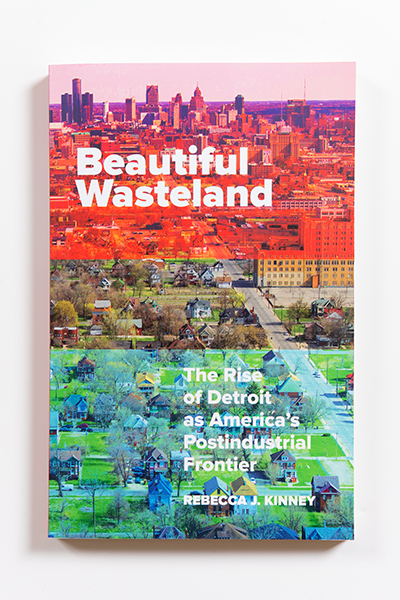 Detroit, once a mecca for those looking for a good job and a better life, is now seen by some as what Dr. Rebecca J. Kinney calls a “beautiful wasteland.” A wasteland because of the perception of its postindustrial devastation, and beautiful because of its potential to rise like a phoenix from its ashes to reclaim its place among the country’s great cities. But who will this gleaming new city be for?

Kinney’s book, “Beautiful Wasteland: The Rise of Detroit as America’s Postindustrial Frontier,” published this fall by University of Minnesota Press, concerns how the stories we tell of Detroit’s past, present and future reveal our ongoing investment in white privilege.

According to Kinney, a Bowling Green State University faculty member in the School of Cultural and Critical Studies who analyzes popular culture as a way to understand racial formation and urban space, this “new Detroit” is a highly racialized version that looks much like the gentrified neighborhoods of New York’s Brooklyn and Lower East Side and San Francisco’s Mission District: mainly white and increasingly upscale.

The conception of Detroit as a place in ruins there for the taking is reinforced by the changing visual narrative of the city as conveyed by corporations, photographers and former residents, Kinney said. “Beautiful Wasteland” begins with two magazine covers from 19 years apart that bear the same headline: “The Tragedy of Detroit.” While both photos show scenes of urban devastation, the 2009 Time Magazine cover sets a strikingly different tone from the 1990 New York Times Magazine. Time added the hopeful subhead: “How a Great City Fell—And How It Can Rise Again.”

Kinney argues that situating Detroit as a “beautiful wasteland,” both desirable and distressed, inextricably links its ruin to its possibility, the latter possible only because of the former.

She looks at stories of rise, fall and current rebirth as redeployments of the American myth of frontiers, examining them through a cross-section of 20th- and 21st-century cultural spaces — an internet forum, ruin photography, advertisements, documentary film, and news media — to illuminate how the stories we tell about Detroit as a frontier of possibility allow us to disremember white privilege and systemic racism. The creation of the “possibility” of the frontier supports the notion that in America, through hard work and determination, people can succeed, avoiding the connection between race, place and opportunity.

As Kinney demonstrates through her examinations of these various formats, the history of Detroit’s original rise as a major American city is typically depicted through the lens of that iconic American story of sturdy immigrants and migrants “drawn to the city by the fire of determination and possibility” and as not about race. But the fall is most often tied to “urban crisis and a culture of city corruption,” implicitly tied to racial integration and the movement of black people into once all-white areas.

Coming full circle, today’s rise of Detroit is linked in popular culture to the return of whites, the “creative class” what many consider the key to attracting and retaining business to cities. This group is generally “whiter, younger and more educated” than the original residents, Kinney notes, and is therefore viewed as more desirable than those who are black, older, poorer and less educated. She looks at examples of food-related magazines and television shows that celebrate the “Urban pioneers” bringing new businesses and restaurants, reaffirming the narrative that Detroit is an empty landscape ready to be settled.

Predicated on the notion of Detroit as a frontier “open and ready for development,” poised to greet these “urban pioneers,” popular culture depictions and developers’ plans overlook, undercut and devalue those who have remained and been there all along — often the working poor who have long done without reliable access to services, goods and transportation.

“Everyday people want development, too, and with it good schools, transportation, garbage pickup and snow removal,” Kinney said. “But there are tensions around development: How can development happen in a way in which profit doesn’t come first all the time? The fabric of the city has shifted.”

Public and private Detroit are on very different trajectories, Kinney said. For those with the new money, times are very good. For other folks who have historically been locked out of investment, the renewed development may once again leave them out of this new sort of “company town,” whose wealth is concentrated in a core area and controlled by a small group. Kinney speculates that only by creating the image of frontier space could developers pitch their case for re-investment.

She shows that neither representation of the city — as postindustrial wasteland nor as land of promise for all — is entirely accurate. The visual narrative of Detroit has moved from a teeming, overcrowded place of fear in the 1980s and ’90s to abandonment and overgrown, empty urban prairie in the early 2010s to a place of possibility and potential today. But, she cautions, the investors see the potential resting on “white return,” with disavowal of the local, primarily black population, who, while once at the forefront, have seemingly become invisible.

Kinney is a metro Detroiter who has experienced the shift in the responses of people upon hearing where she is from, which have gone from the “You must be glad to have gotten out of there!” to “I hear there are a lot of great things happening there.”

And although it is true that, with the shifting geographic location of the auto industry to the suburbs and outside the region as early as the 1950s, there has been tremendous disinvestment and population loss, the 139-square-mile, primarily black city still has a sizable population of close to 700,000, Kinney said, with many stable neighborhoods. The narrative of the racial shift of the city from black to abandoned to white is not accurate, demographically, as shown by the 2010 Census numbers.

In a recent discussion of current developments in Detroit, Kinney pointed out that, in this new era, land speculation has reached epic proportions. The two most visible investors are Dan Gilbert and Mike Ilitch. Gilbert is CEO and founder of Quicken Loans, owner of Cleveland Cavaliers, and proprietor of multiple casinos in Cleveland. His corporation has bought more than $1 billion of residential, retail and office property in downtown Detroit in just five years. Ilitch owns Little Caesar’s Pizza, the Detroit Tigers and Detroit Red Wings and is building the new hockey arena in Detroit.

Although infrastructure and development are needed, “the city is growing and changing in particular ways because of deep-pocketed individuals,” Kinney said.

What is Detroit going to look like 20 years from now? Kinney’s research serves as a warning that if development continues apace, poor, working class and people of color may not figure in that picture.

Her study of racial formation and urban development in Detroit is part of Kinney’s ongoing scholarship. This year she is a fellow at BGSU’s Institute for the Study of Culture and Society and will spend spring semester work on her next book, “Rust Belt Chinatowns: Restaurants, Race and Redevelopment in the Twenty-First Century,” which analyzes the complexities of race and redevelopment by looking at “Asian American” space in the Rust Belt. She began early research for the project as a Summer Seminar Fellow in the 2016 National Endowment for the Humanities summer institute at the Newberry Library in Chicago, “Mapping Text and Travel.”